Back in the Stone Ages of the 80's before the compact disc there were relatively few options for a poor fellow to have his music on the go. There was the transistor radio, of course, but that kind of tied you to what was on the radio and it was pretty bleak. You could spend some dough and get a ghetto blaster style boombox, but then you'd have to share and not everybody was amenable to that.

Then came along the Walkman and by the early part of the decade the price came down enough to be economically feasible for a penniless schmuck like myself to afford one and make his ever expanding record collection go portable. This involved lots and lots of cassette tape compilations that would be carefully chosen in the morning and carried around with a journal of juvenile profundity and various other bits of detritus in an over the shoulder man bag purchased at the Army/Navy store on Boylston st. I'd usually carry five or six ninety minute cassettes of most recent purchases. I loved making tapes. I traded tapes with other like minded individuals. I made compilation tapes for potential dates. (which is in itself a very special courtship ritual that's all but lost today.) I liked doing it.

Fast forward to the 21st Century and as I start digging into the 60's Garage/punk/psych box that I haven't really paid attention to in quite a few years and I start remembering how much I absolutely fucking loved this shit and I can still almost recreate the track listings of certain tapes that I played over and over again.... 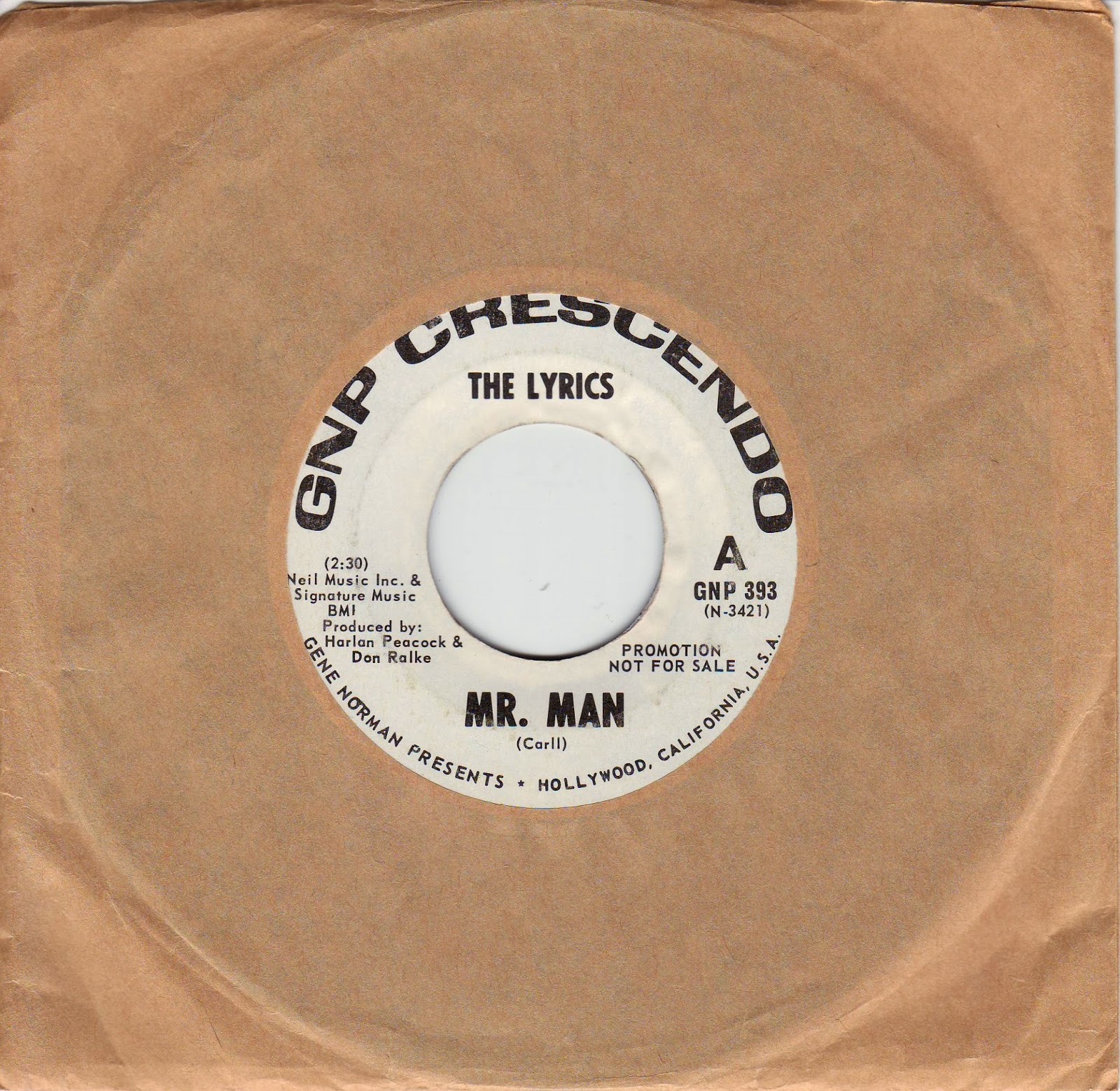 From San Diego. Both sides are quite good garage rockers of the era. This is their third single of three. It's the second one with the snotty bluesy "So What" that's been comped to death, but I personally listened to this single a whole fucking lot and still can't decide which side I like better. 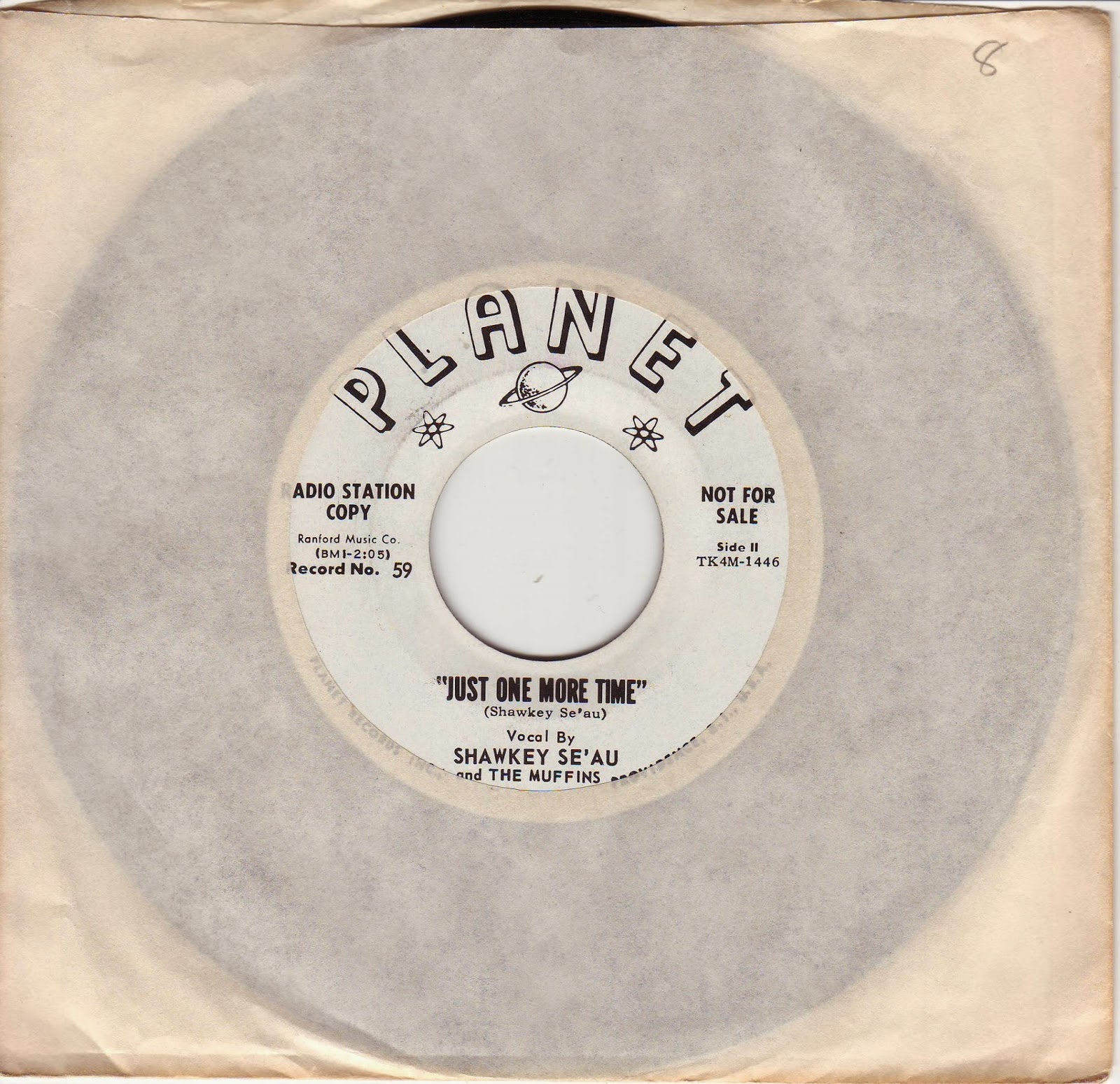 The Muffins were most likely from Rhode Island. They're kind of a mystery. They back two different vocalists on this single One side of this is a reverb drenched romantic ballad as performed by John Broughton called "Walk Alone" which is cool enough by itself if you're like me and like that moody New England garage thing.
But it's the garage punker "One More Time" on flip that gets all the action. This one is fronted by the inimitable Shawkey Se'au that gets all the panties damp in collector circles. Primitive and repetitive and wild. Just like the doctor ordered. 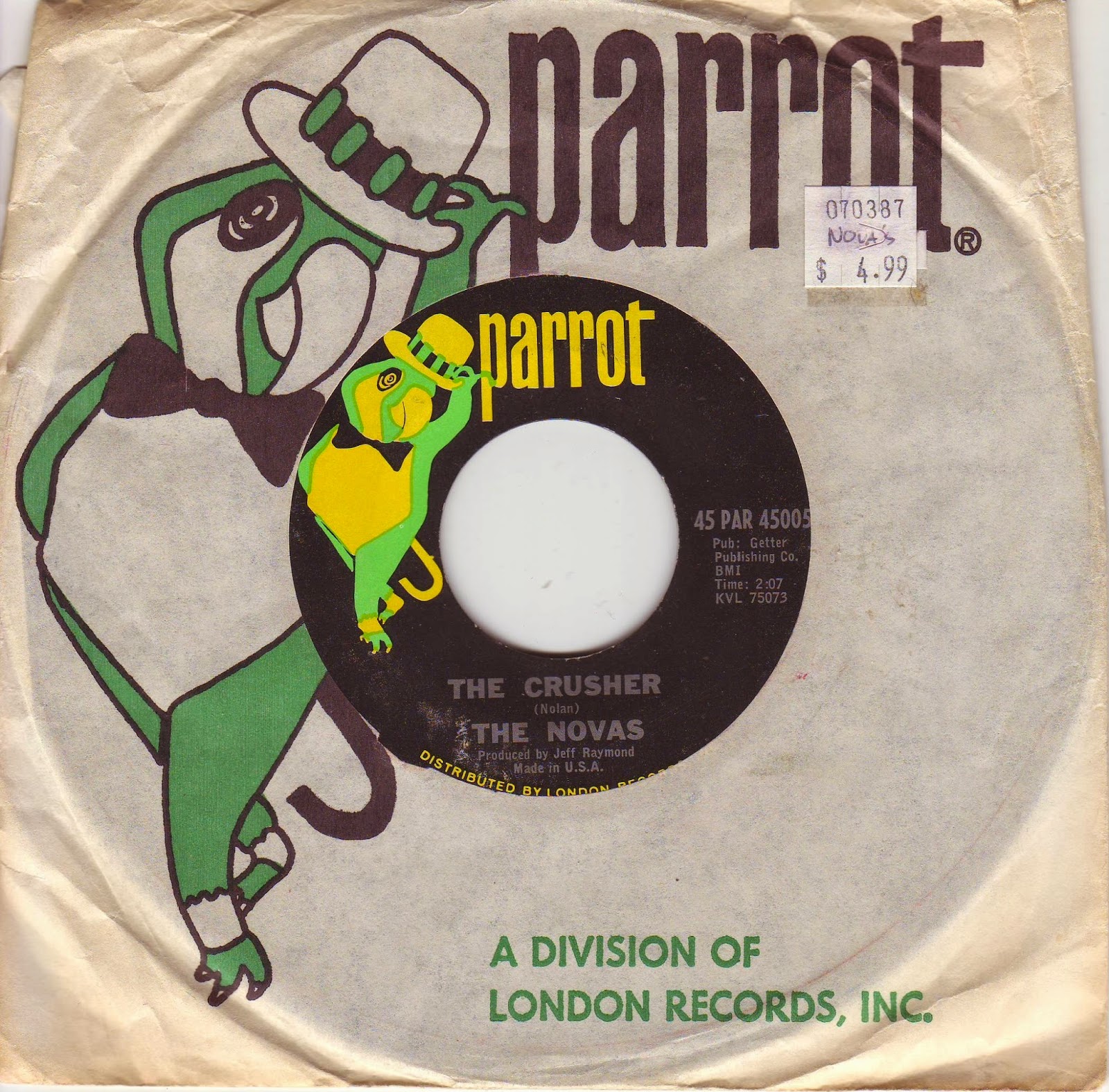 
The Novas were from Minneapolis and threw down this love note to famed wrestler Crusher Lisowski in 1964 during some of the last gasps of the US surf music era that would be unceremoniously killed off by a bunch of lame English bands that year. But here's your opportunity, you turkeynecks to finally do the eye gouge in the safety of your own home.
Posted by Swinging Singles Club at 12:09 PM No comments: 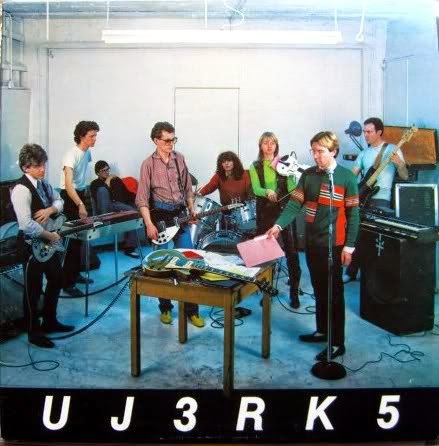 UJ3RK5 were from Canada.  If you're really interested in their story there's a few things to read. I suggest you do that. Or you can simply like them on Facebook and look weird in front of your family and friends. It's your call 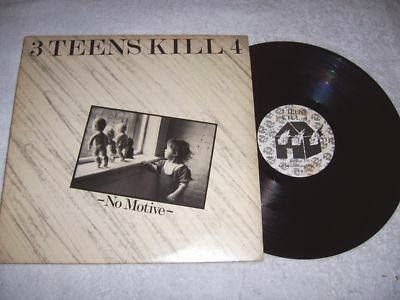 
3TK4 have a wiki page. They have a Facebook page. That should provide you with enough to go on. I'm hungry and I'm going to fry up some bacon for my breakfast. I worked all night and got up at 5pm and now it's time eat something. That's how I'm going to spend my time.
Posted by Swinging Singles Club at 8:11 PM No comments:

The Other Singles Box

For a long while I was also pretty obsessed with 60's garage/punk/psych records. I dug deep and picked up as much as I could afford along with the other multiple musical obsessions I had. (Keeping up the prolific output of The Fall alone was enough to break any starving twenty-something's bank or at the very least put a sizable dent in one's beer money.)

I broke into that box the other day with a decision to finally do away with the arbitrary vinyl segregation of that crap from the rest of my crap. It was all going to be one gigantic pile of vinyl crap from now on. There's some really good stuff in there.

Since that's how I roll, I'm a gonna start with some of shit from the New England area because that's what I wanted to listen to when I pulled this shit out. 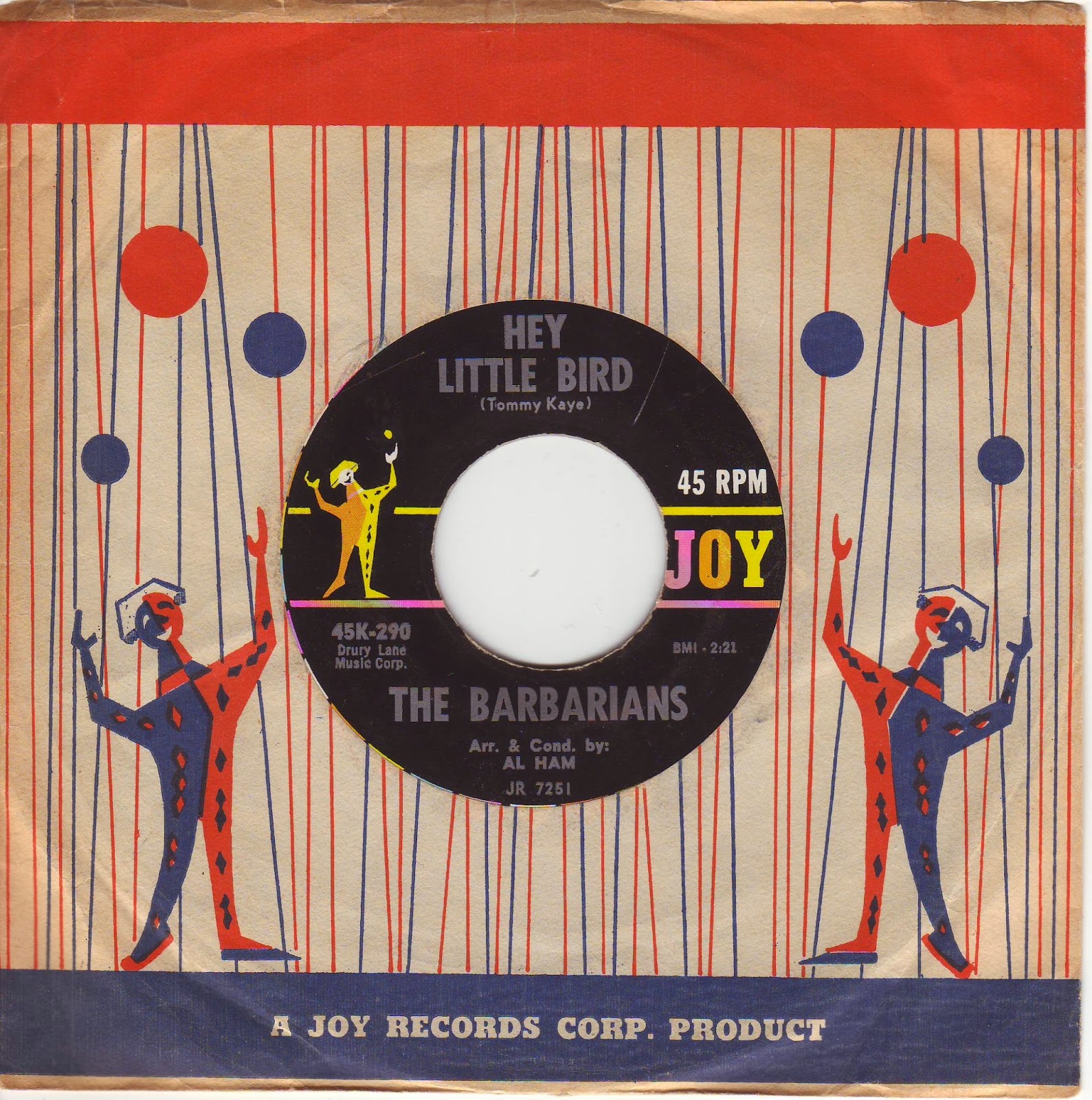 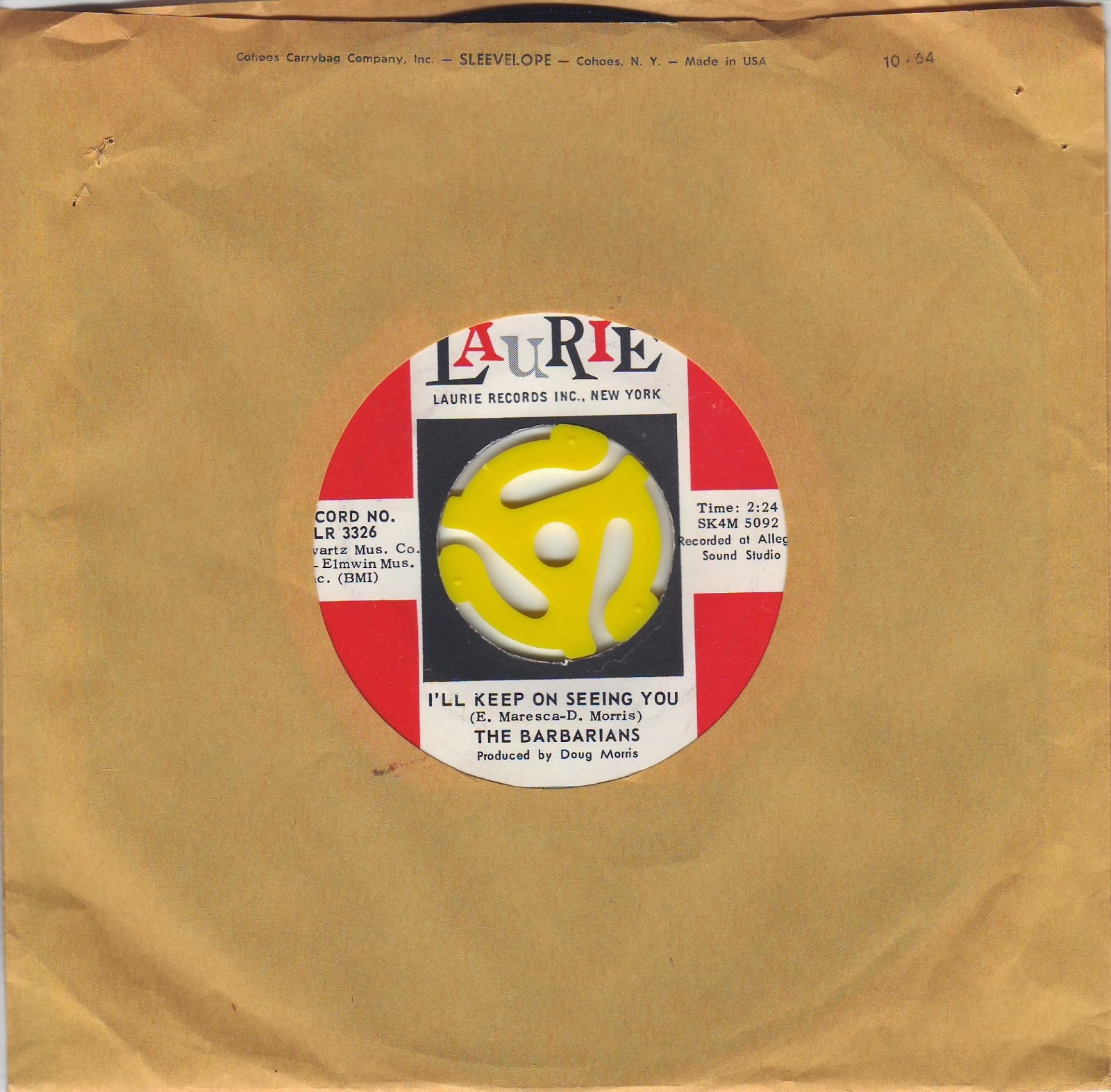 The Barbarians are probably the famous names here. They have two big claims to fame. 1. They made an appearance in some cuts of the "T.A.M.I. Show" along side of such big names as Chuck Berry, Beach Boys, an amazing James Brown and a really really baked Rolling Stones. They performed their first single "Hey Little Bird" and 2. the drummer, Moulty, had suffered an accident earlier in his youth and had lost a hand and drummed with the aid of a prosthetic hook. Not really a gimmick, but something interesting. (there was at least one other 60's percussionist with a hook in the Cryan' Shames which though hardly qualifies as a trend makes you go hmmm...) This does however come into play for the B-side of "I'll Keep on Seeing You" which features a rather over the top inspirational number entitled "Moulty" about persevering in what you want to do in life despite the setbacks you may encounter along the way....Forgive me, I'm getting misty just thinking about it...

It is truly a camp classic that I'm sure Moulty regrets agreeing to do to this very day. I can't blame him, but still I find it a rather guilty pleasure. The one thing I've found of note about this particular recording is that the actual Barbarians don't actually play on this one. Instead, Moulty's passionate inspirational plea is backed by the Band (you know, the one who backed Bob Dylan) without Levon Helm. I'm not sure that they keep this on their resume, though. 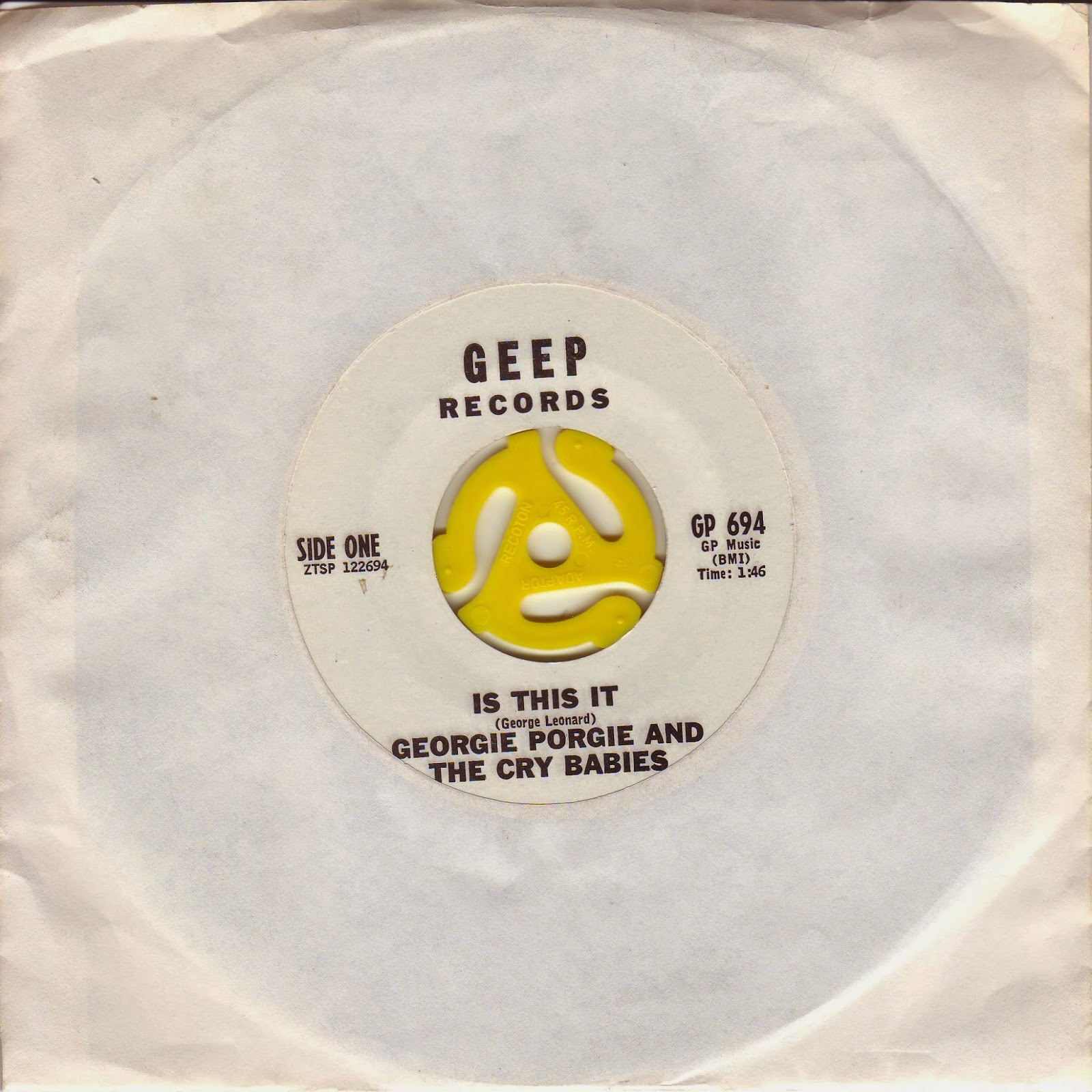 Georgie Porgie put out a number of singles with a couple of different groups during the 60's. This is maybe the second or third one. Here's an interview with him. It's one of those ones where the A-side is kind of crap, but the B-side is gold. "You've Been Gone a Long Long Time" is a little garage pounder slathered in a shit ton of reverb. I'd forgotten how much I really loved this song. It's also one that for whatever reason hasn't been comped to death like most of its ilk. I have one long suppressed memory of making an epic journey home one lysergically inspired evening many many years ago because I really really needed to hear that song because it was calling to me and it was exactly the way my head sounded that evening. It was pretty blissful and we probably played it a dozen times before moving on. Ahhhh, youth. 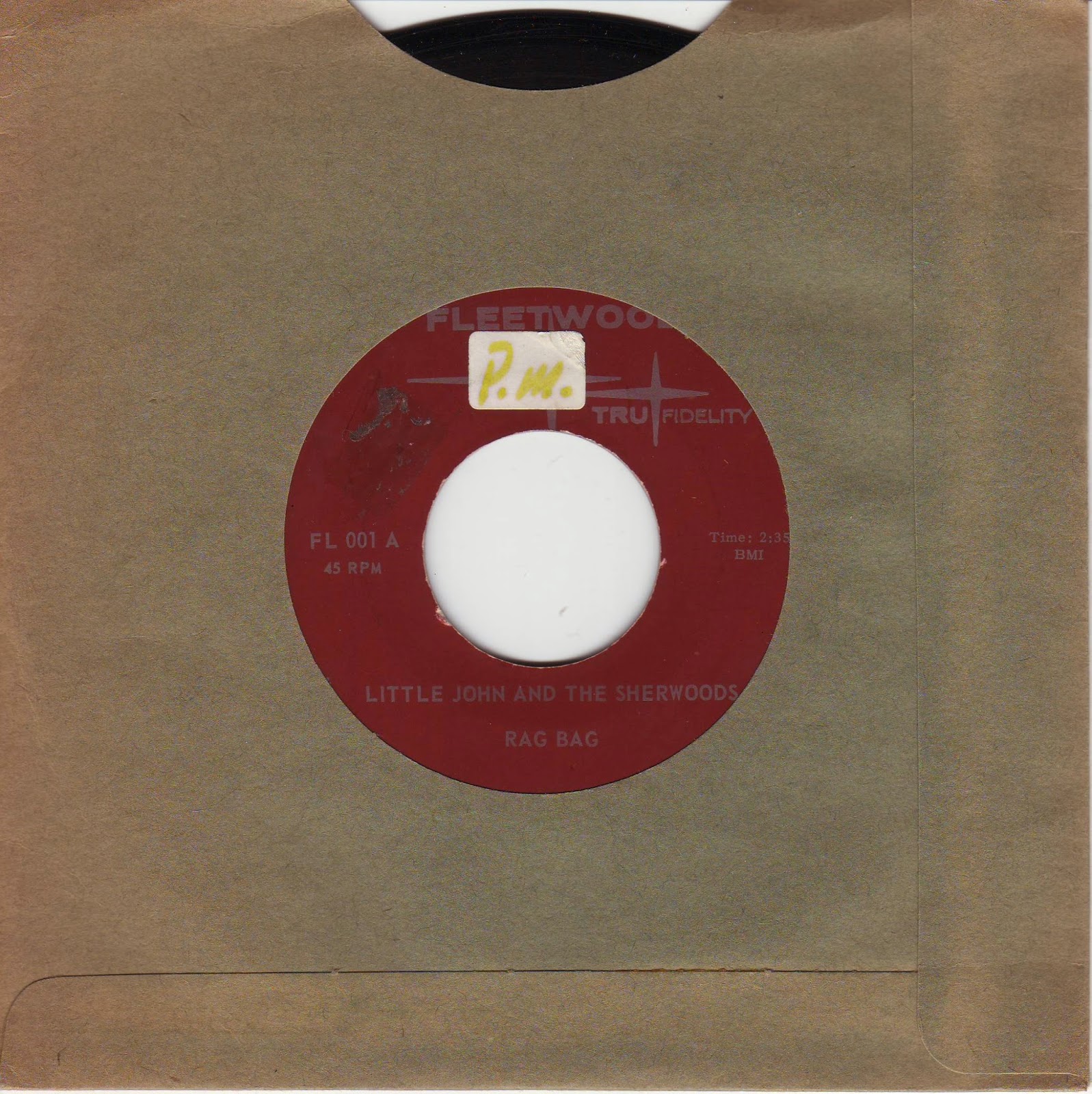 
Little John & the Sherwoods on the Fleetwood label. The A-side is a reasonable garage number about dating a girl from the other side of the economic tracks. Not bad, but listenable. The money side is on the flip with "Long Hair". It's a lovely snotty fuzzy manifesto regarding hair length the upshot of which appears that despite society's disapproval of their coiffures, they're still banging society's daughters anyway. I find that message a lot more inspirational than "Moulty".
Posted by Swinging Singles Club at 12:23 PM No comments:

I need another cup of coffee. Here's another couple singles. If you're really interested in finding about the bands just google that shit up yourself like a self sufficient adult.

I'm not your mother. 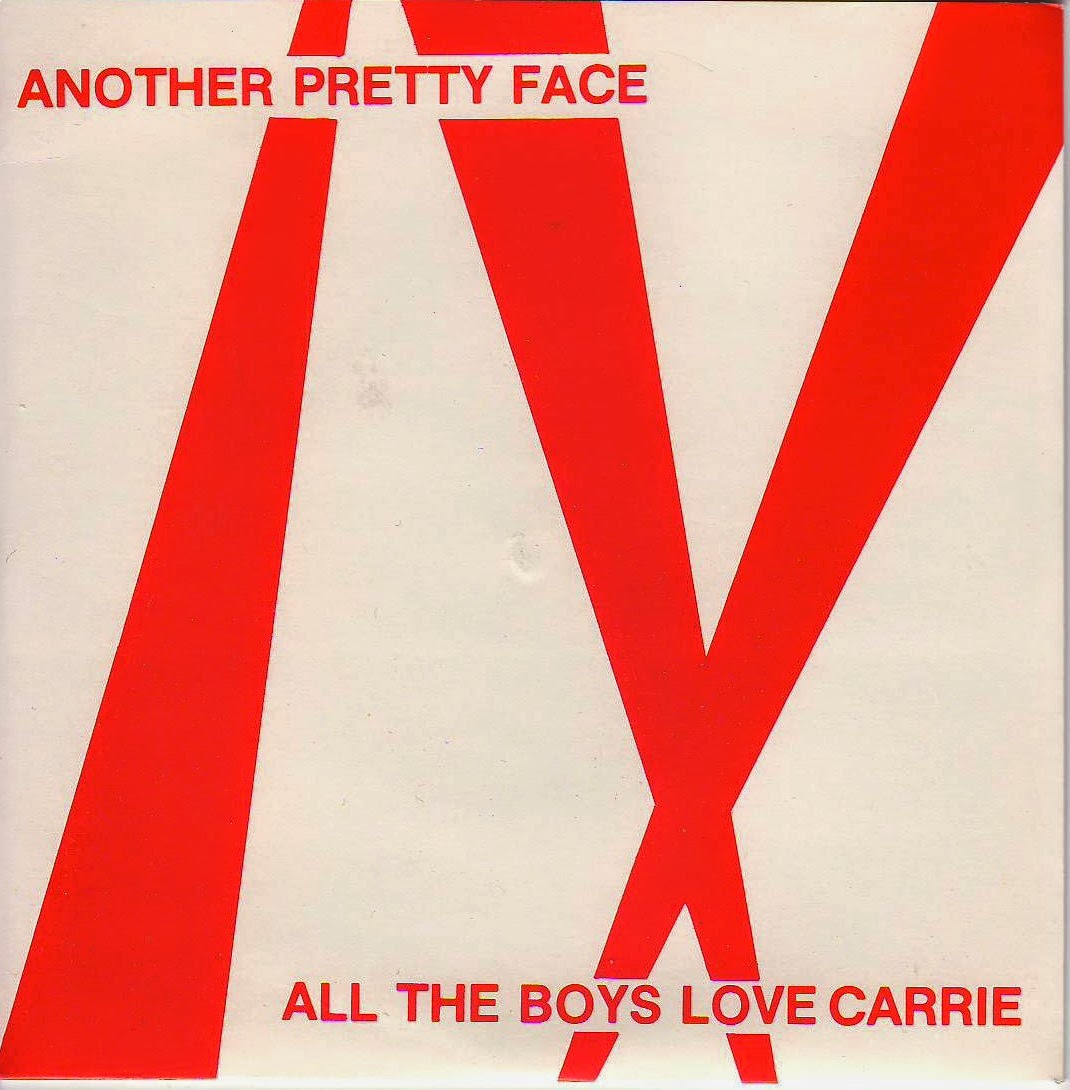 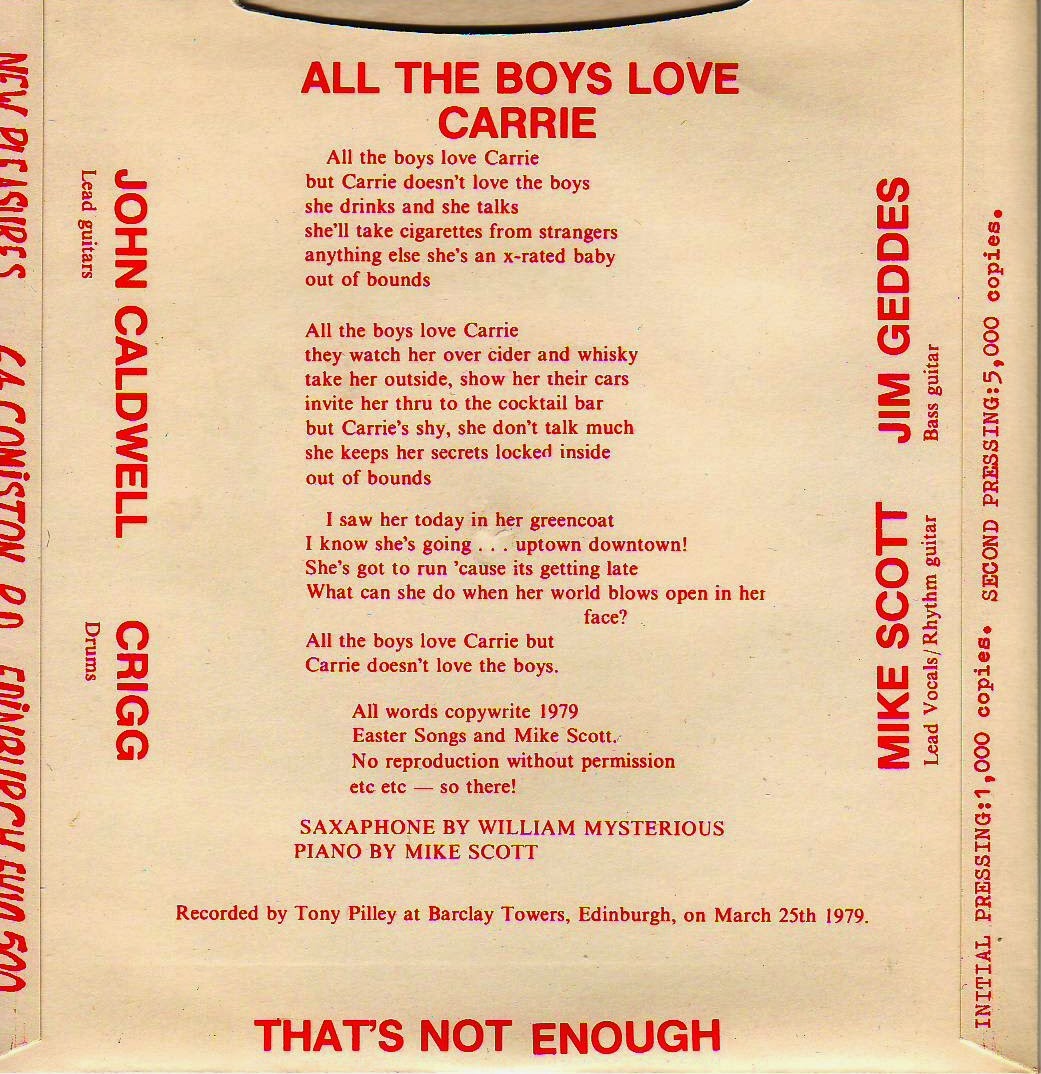 (I will say that the one thing about this band. It has future Waterboys main dude Mike Scott in it. I like it anyway.) 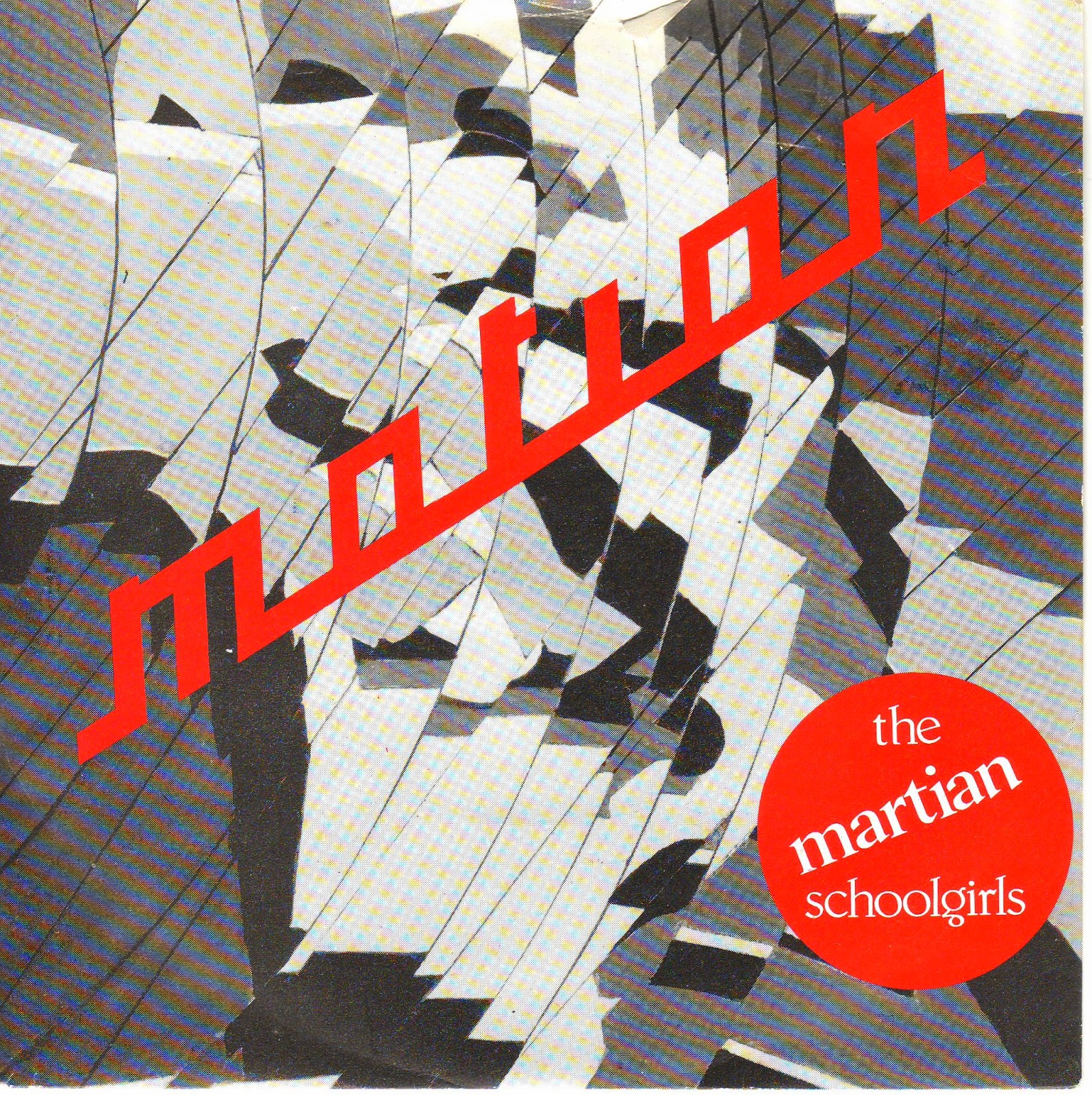 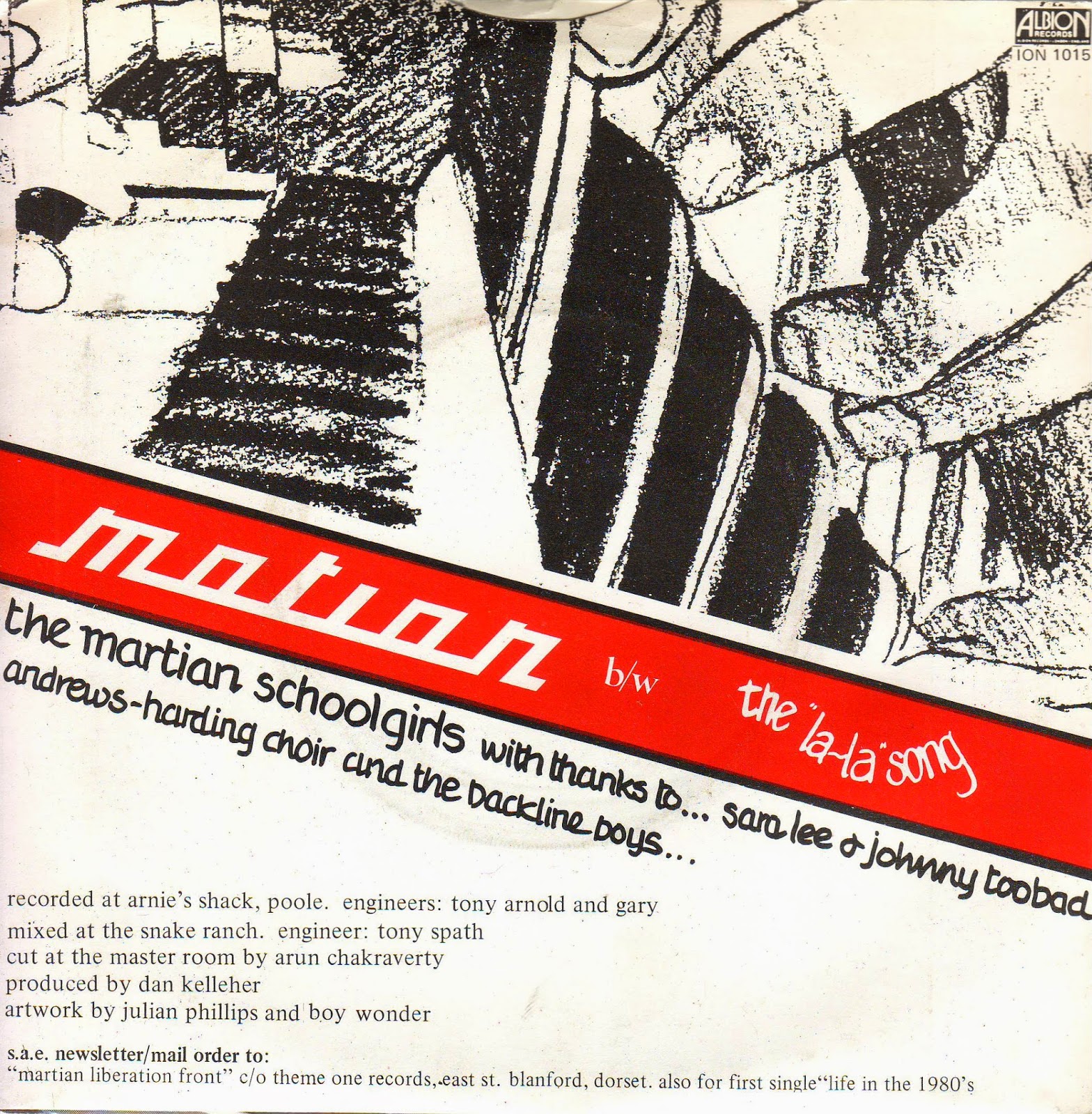 Posted by Swinging Singles Club at 11:31 AM No comments:

I like New Wave Power Pop in a 12" format

There were some 12" eps I needed to digitize. I share. Pictures unfortunately are from the deep end of the interwebs since the camera I have is kind of potato quality and photographing 12" covers is a pain in my lazy ass.


There was a time when it was totally uncool to enjoy local level New Wave records and nice pop songs by skinny tie wearing bands. That was not punk and you were a poser, or a loser or a dork or some such nonsense. You'd have to front a little at the all ages show to keep your street cred as somebody who was serious about their music and pop songs were way too commercial sounding to lend you any credence as a taste maker. Those guys were selling out and trying to make it big because apparently by joining a band you took some kind of unspoken vow of poverty in exchange for you artistic freedom which required you to make music that would only appeal to a small impoverished group of jerky pretentious teens in leather jackets and pink hair or something. Or so it seemed, at least.

I didn't care too much. I was/am a dork. I love a good pop song. 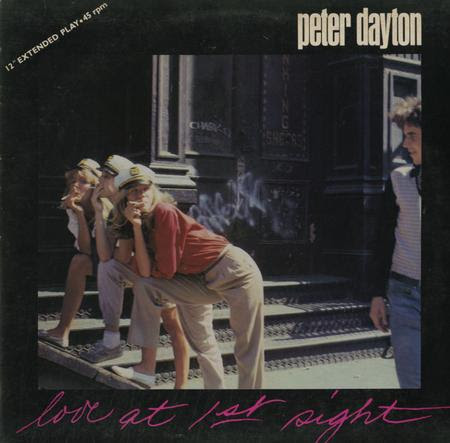 The Peter Dayton Band kicked out this jam in Boston in 1981. Previously Peter Dayton had been part of La Peste who were responsible for the second best song referencing blow jobs to come out of the Boston area, "Better Off Dead"(Which is in the queue somewhere down the line, kids) But where La Peste were a driving kbd style band, the solo stuff was a lot more farfisa new wave with surf and rockabilly reference points. It rocks a lot more gently but you can dance to it and your girlfriend would go with you to the show. Ric Ocasek was behind the board for the recording of this and the rest of the Cars make appearances in various capacities as well for those Cars completists.
My only experience with the band is an appearance at some really odd outdoor show that me and some teenage friends piled in a car to drive to the boonies to see. Peter Dayton played the first slot and then there was the Jim Carroll Band (with Lenny Kaye on guitar) and the headliners were the Ramones. There were probably a few other bands in there too, but none of them remain in the failing memory banks. It was wicked good as the kids are wont to say.

Meanwhile a couple of years later in Nebraska, a young gentleman by the name of Danny O'Kane released this little new wave power pop elongated player with backing by the Model Citizen Club. It seems pretty unfairly obscure. Perhaps it's the congas. I find it to be otherwise pleasant listening. Brief googling suggests that these intrepid musicians made their way east to better enjoy obscurity and poverty in New York City where another record was released. It only awaits the days to come where the obscurists and enshrine it as a lost masterpiece based on its rarity more than its content. Until then, enjoy it. It's a worthwhile spin.
Posted by Swinging Singles Club at 11:18 AM No comments:

Another One For Your Fifty States Collection


Anemic Boyfriends were from Alaska. You're Welcome.

"Guys Are Not Proud" is an odd little ditty about the sexual proclivities of the average Alaskan male and their willingness to stick their dick into various unsavory places. It's supposed to be funny, I think. 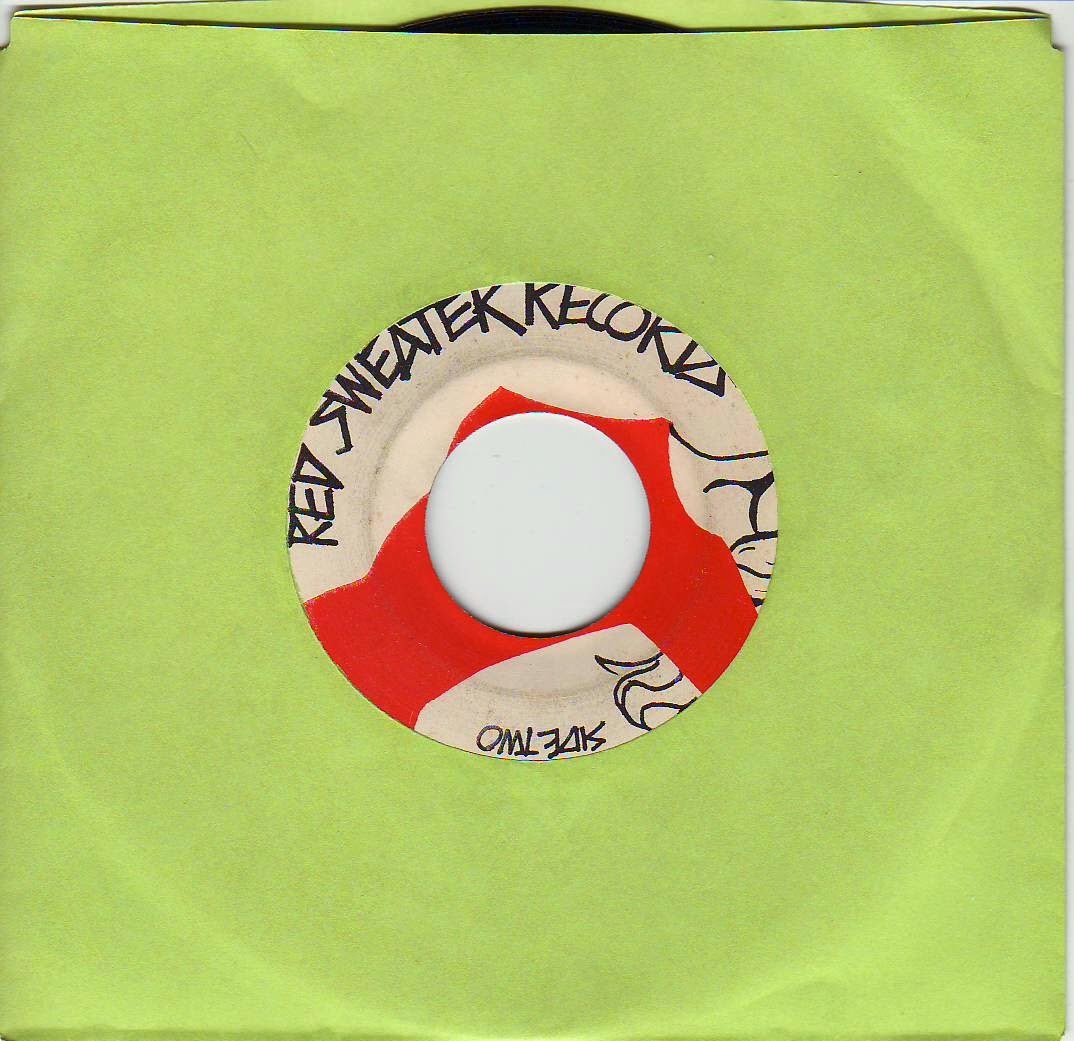 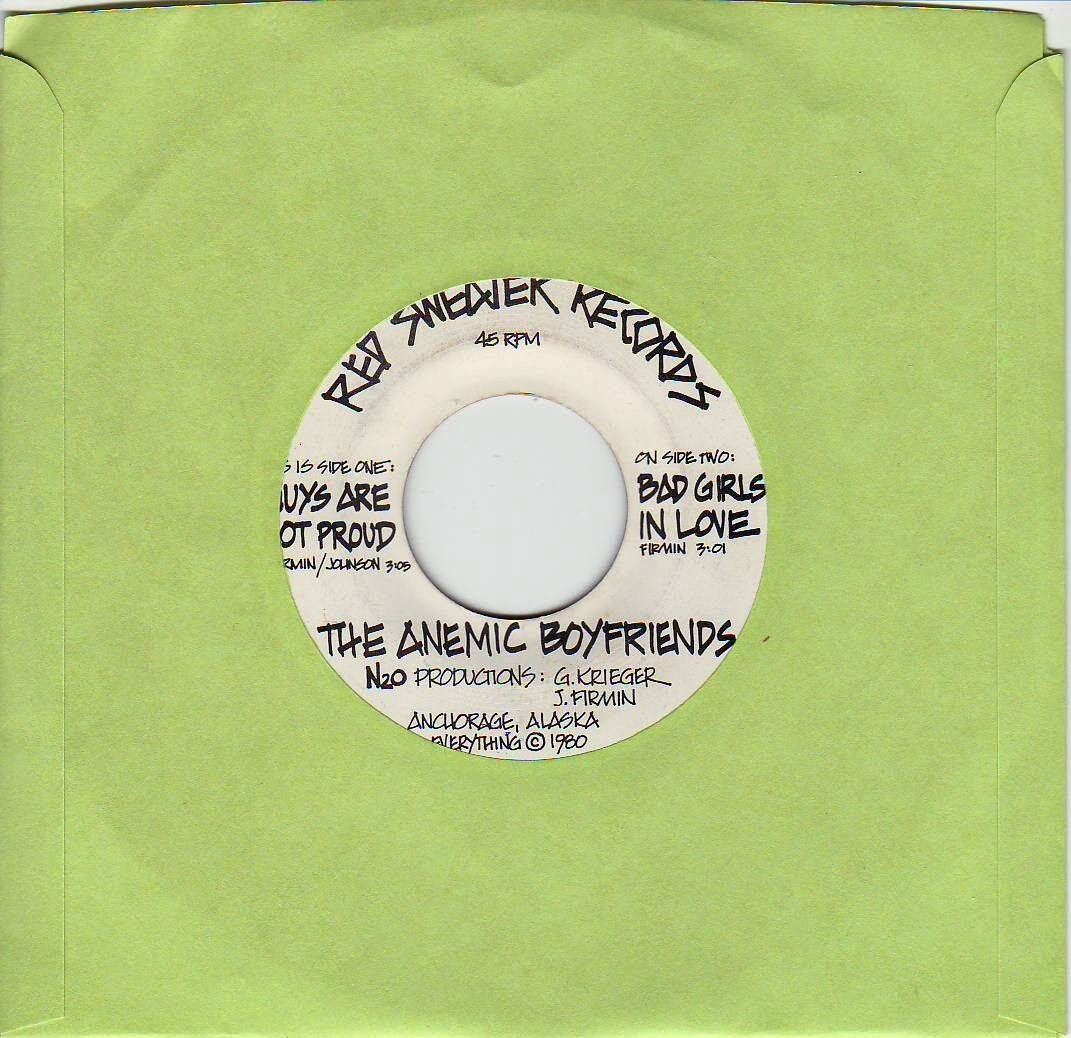 the Appliances were from Madison, WI. It's kind of a dark record. But it's cold there.
They put out an lp as well. I don't have that. 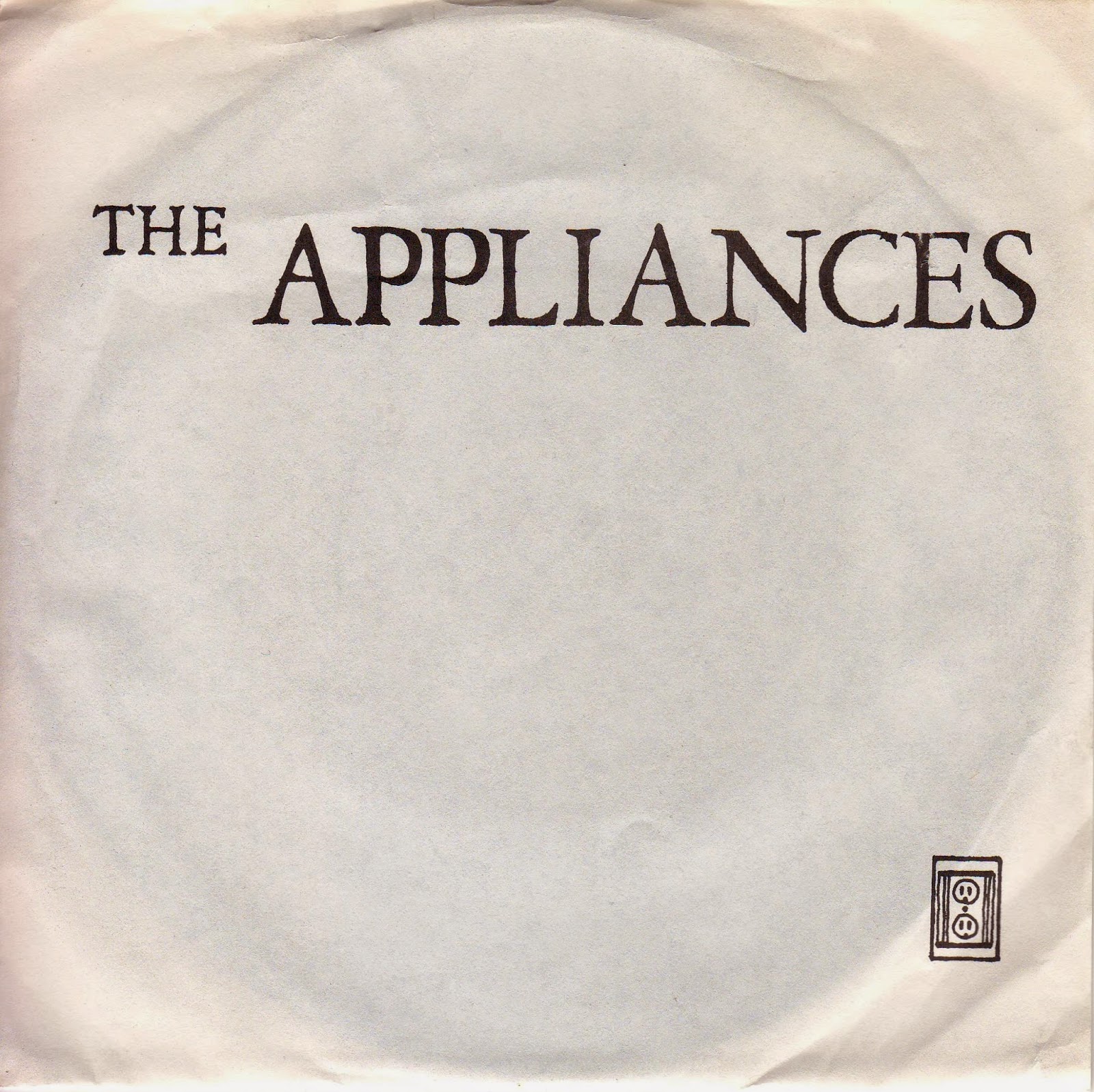 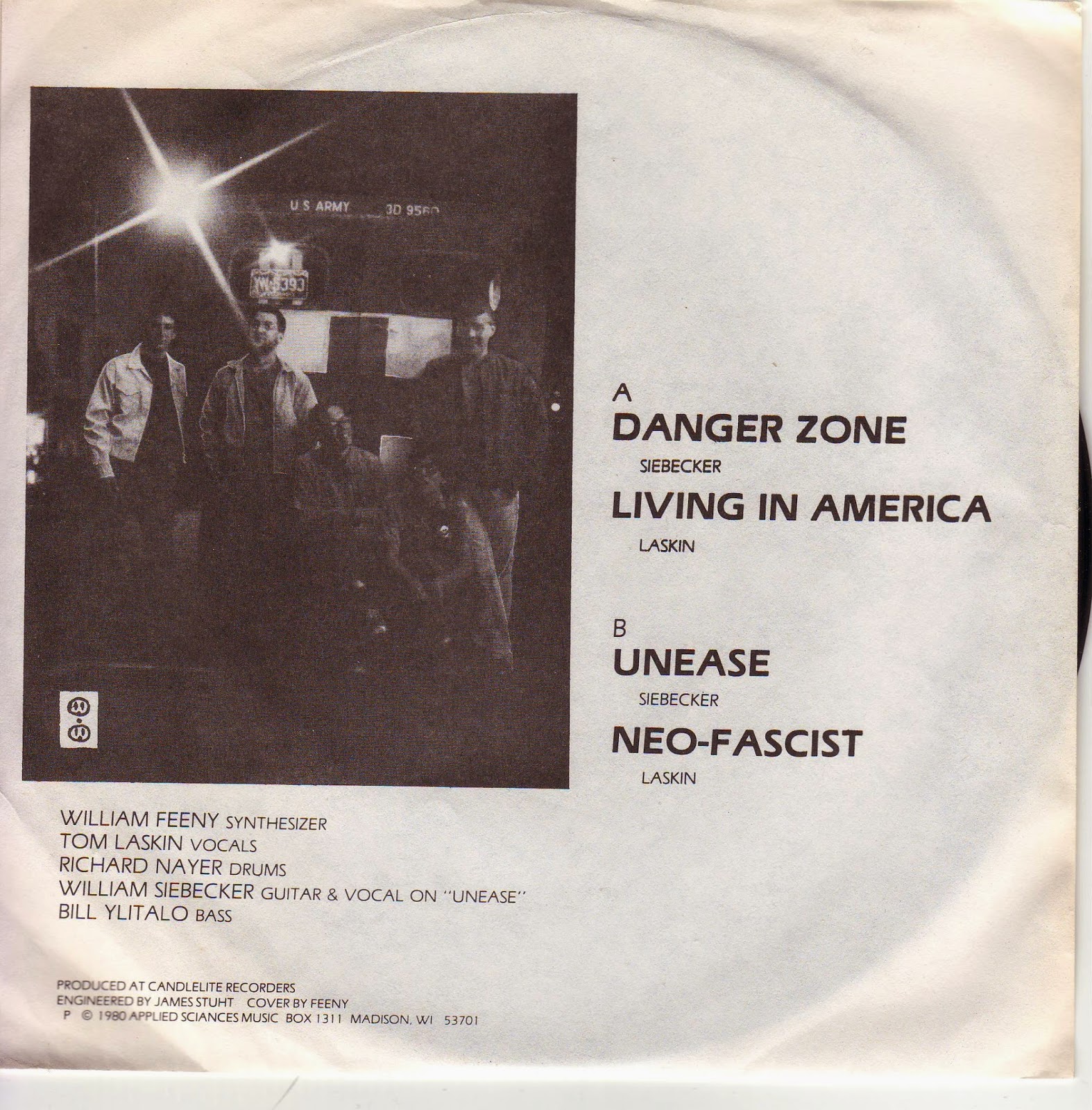 Posted by Swinging Singles Club at 11:08 AM No comments: