Synths. Can't live with them, can't avoid them at certain points in the musical continuum. Here are a couple of examples of that. 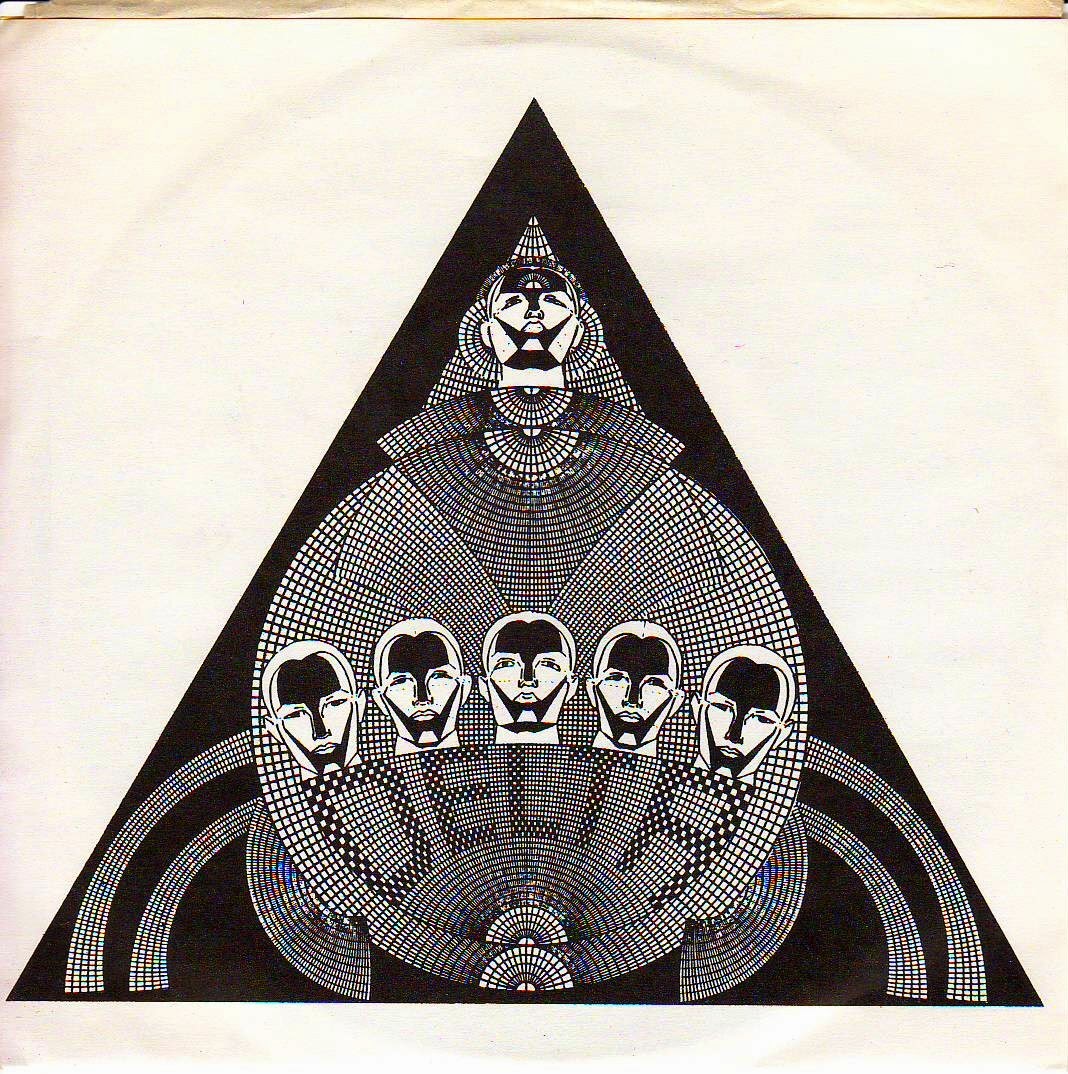 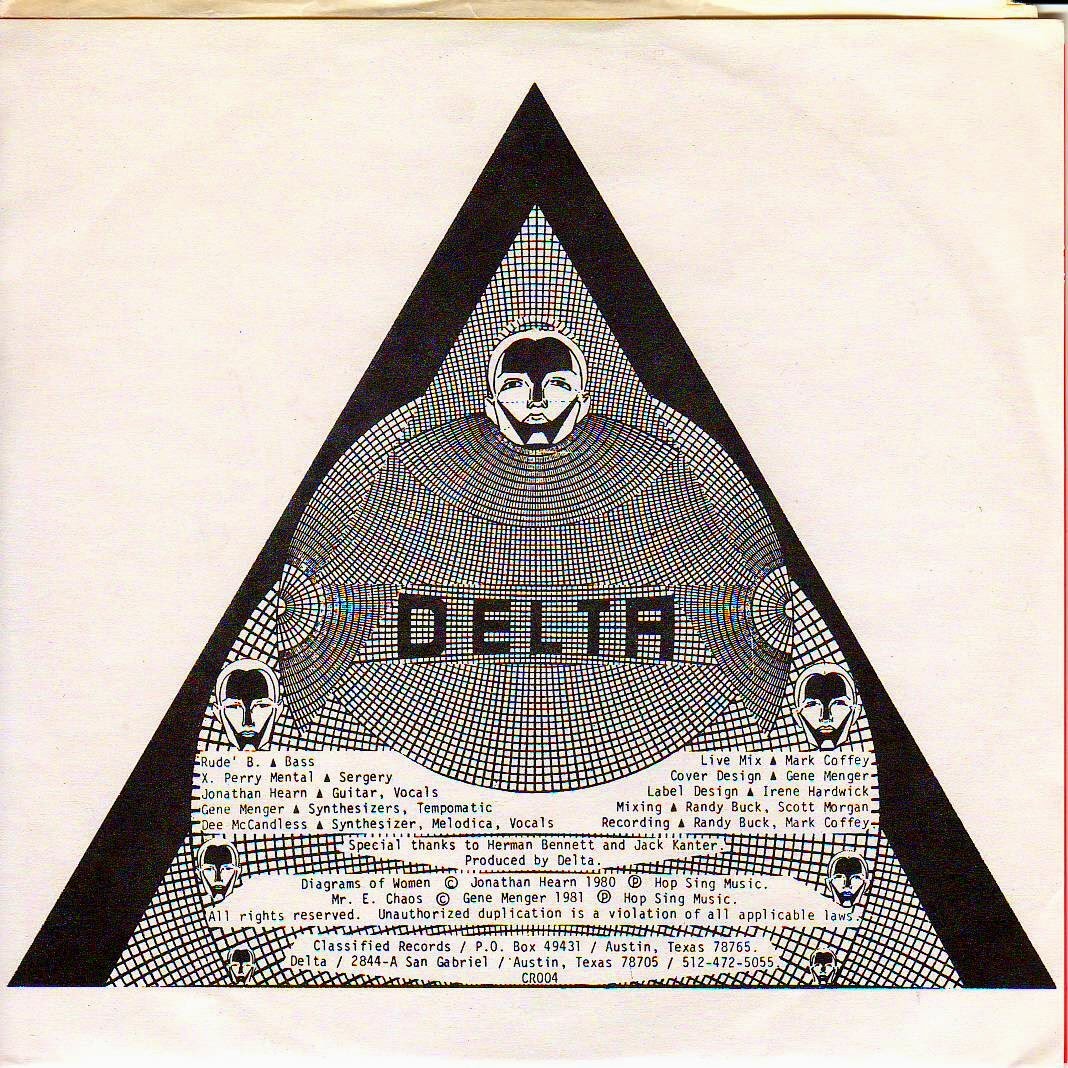 Delta put out this oddity on Classified Records out of Austin, TX who also put out the F-Systems single that I'll get around to one of these days. It appears that there were triangular versions of the sleeve as well.  For best results, do the robot while listening. 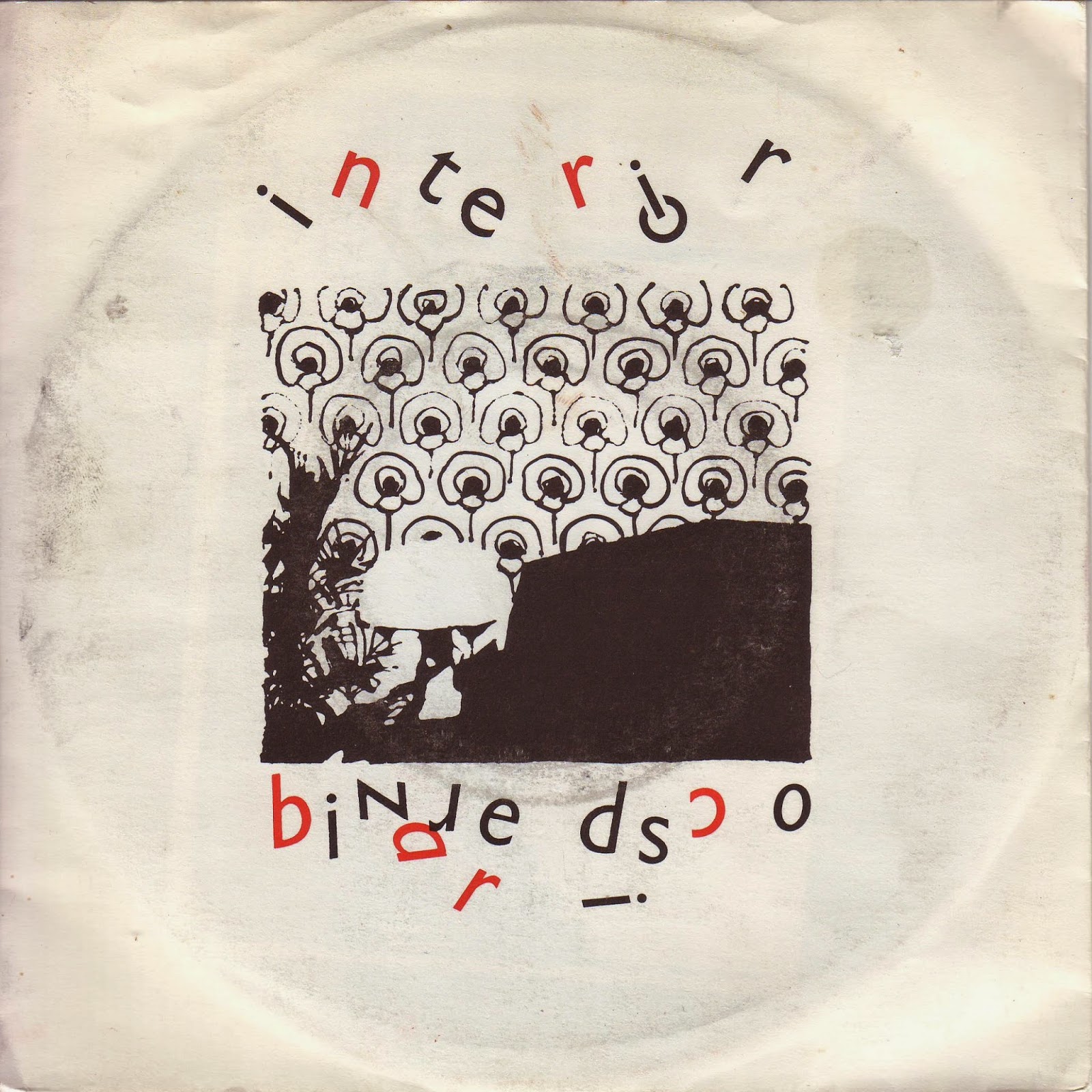 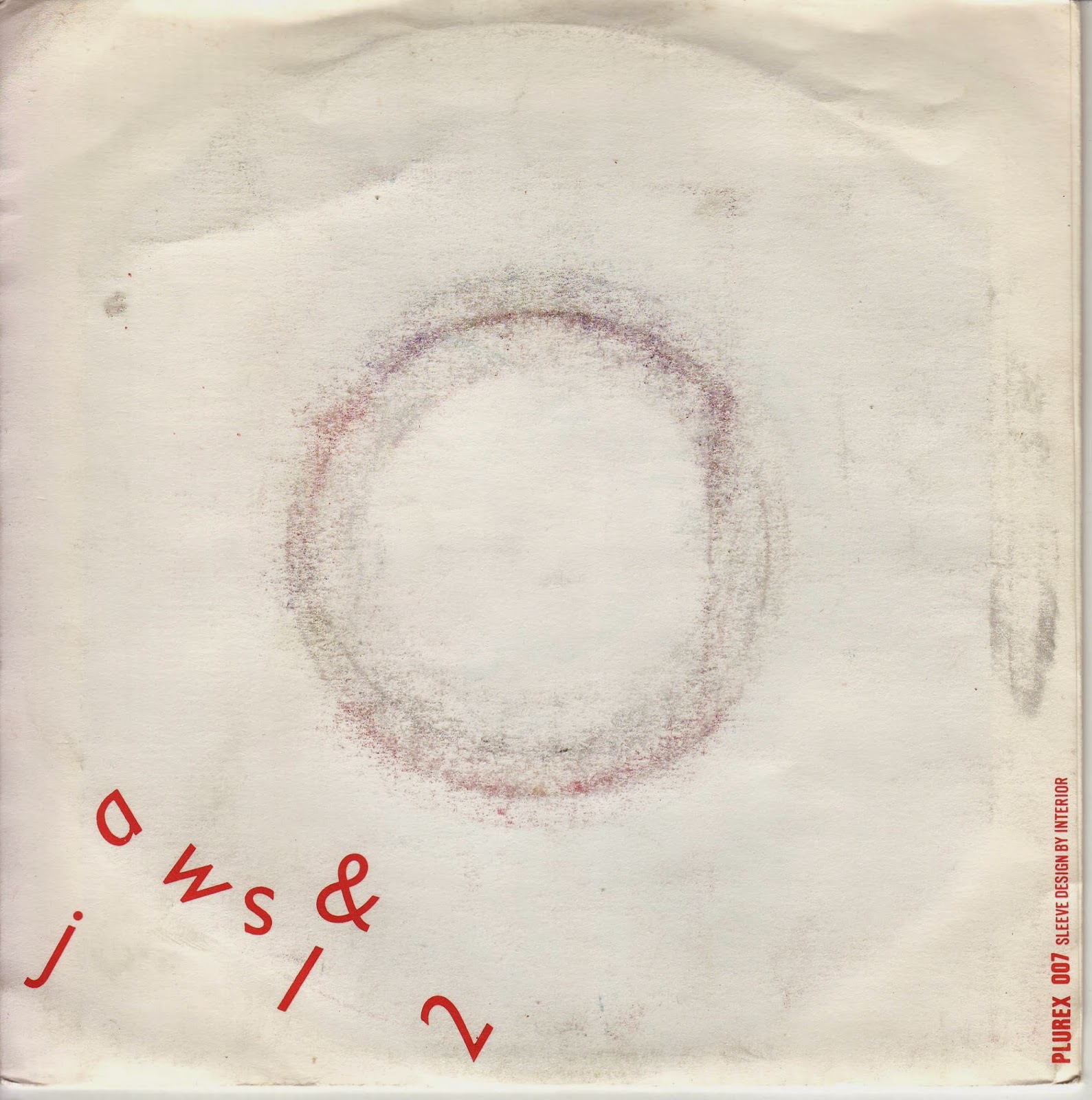 Interior were Dutch. This appears to be their only release. Please feel free to continue with the robot.
Posted by Swinging Singles Club at 1:49 PM No comments:

I'm lived in the Minneapolis area for a long long while now. Here's some local obscurities for the discerning listener. They're a couple of bands whose entire existence I only know of because I've seen their records in cutout bins all over town over the course of many years before finally prying a dollar from my pocket and buying them. 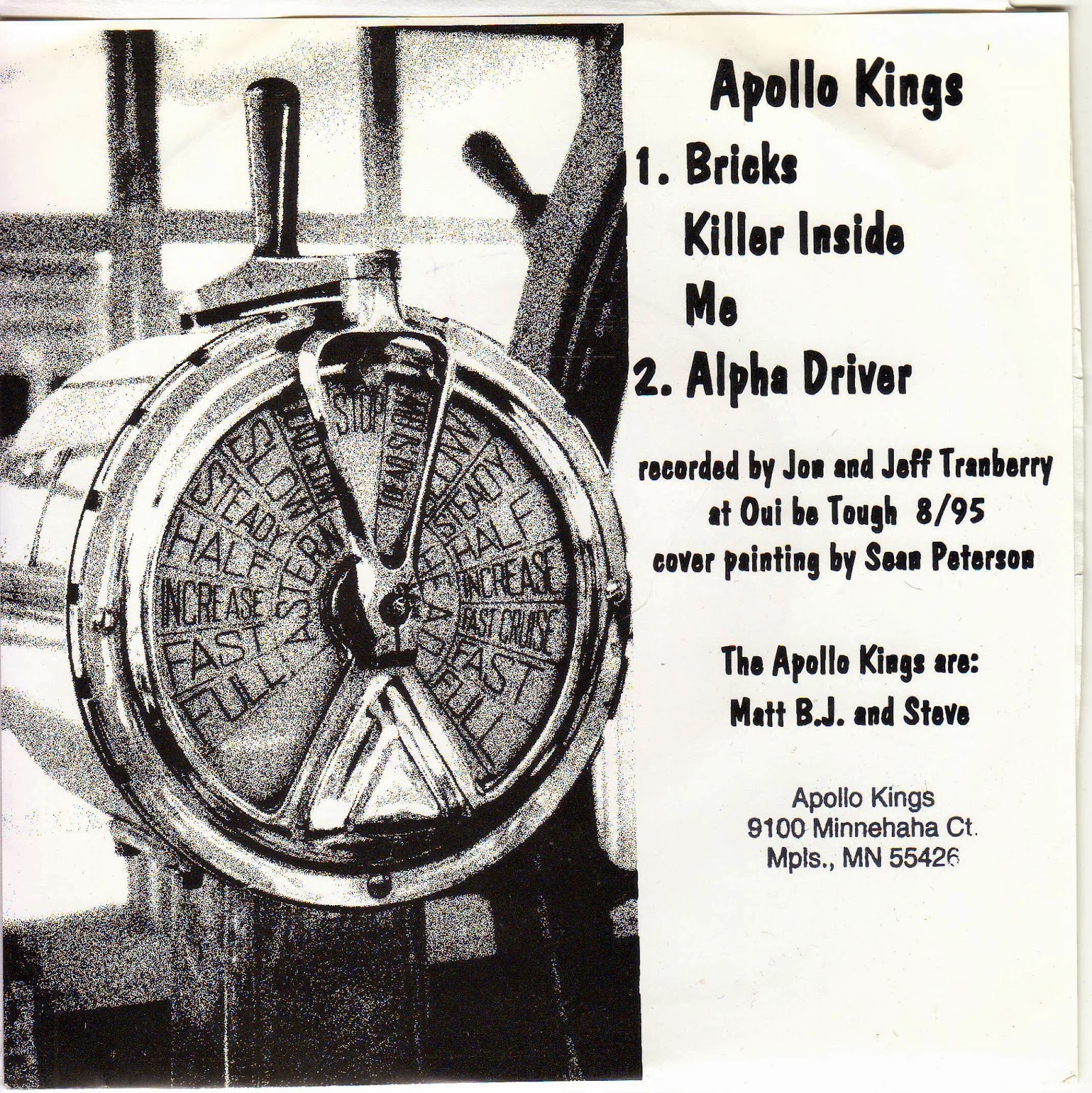 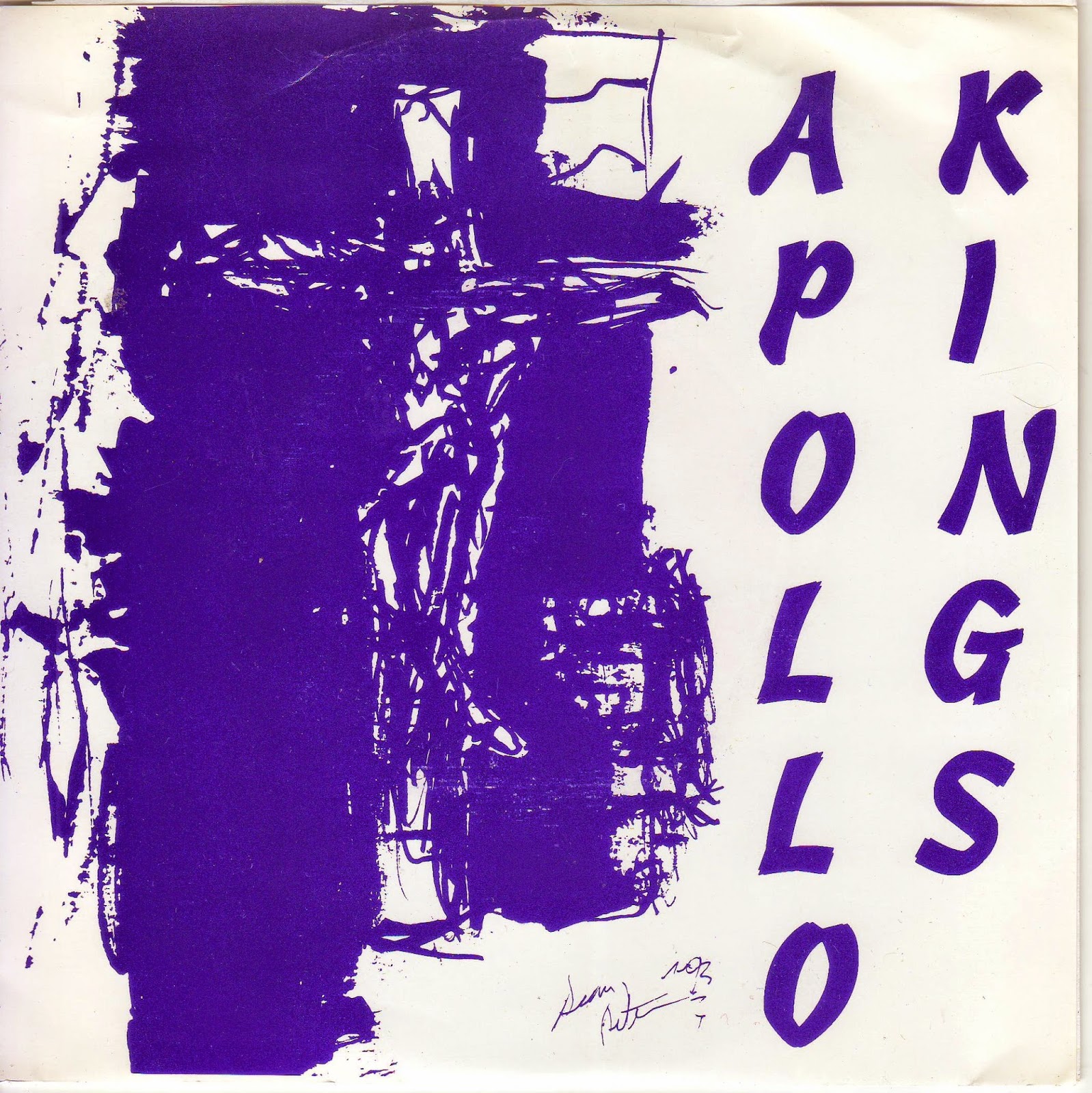 I know absolutely nothing about this band. I don't remember ever seeing them. I don't even remember them being listed on a bill for a show I didn't see. There's not much to be found online. They played a Show in the 7th St. Entry (King Can/Mickey Finn/Apollo Kings) on September 24, 1995. That's about the extent of it as far as I can tell from three minutes on Google. It's certainly punk rock. Lots of distortion. Loud/quiet. And that really shitty upturned bucket snare sound that the 90's churned out. (and I will forever hate.) "Alpha Driver" is the winner here for me. Longer song with some of the Slint tendencies that everybody was starting to add in the wake of a realization that Spiderland existed. 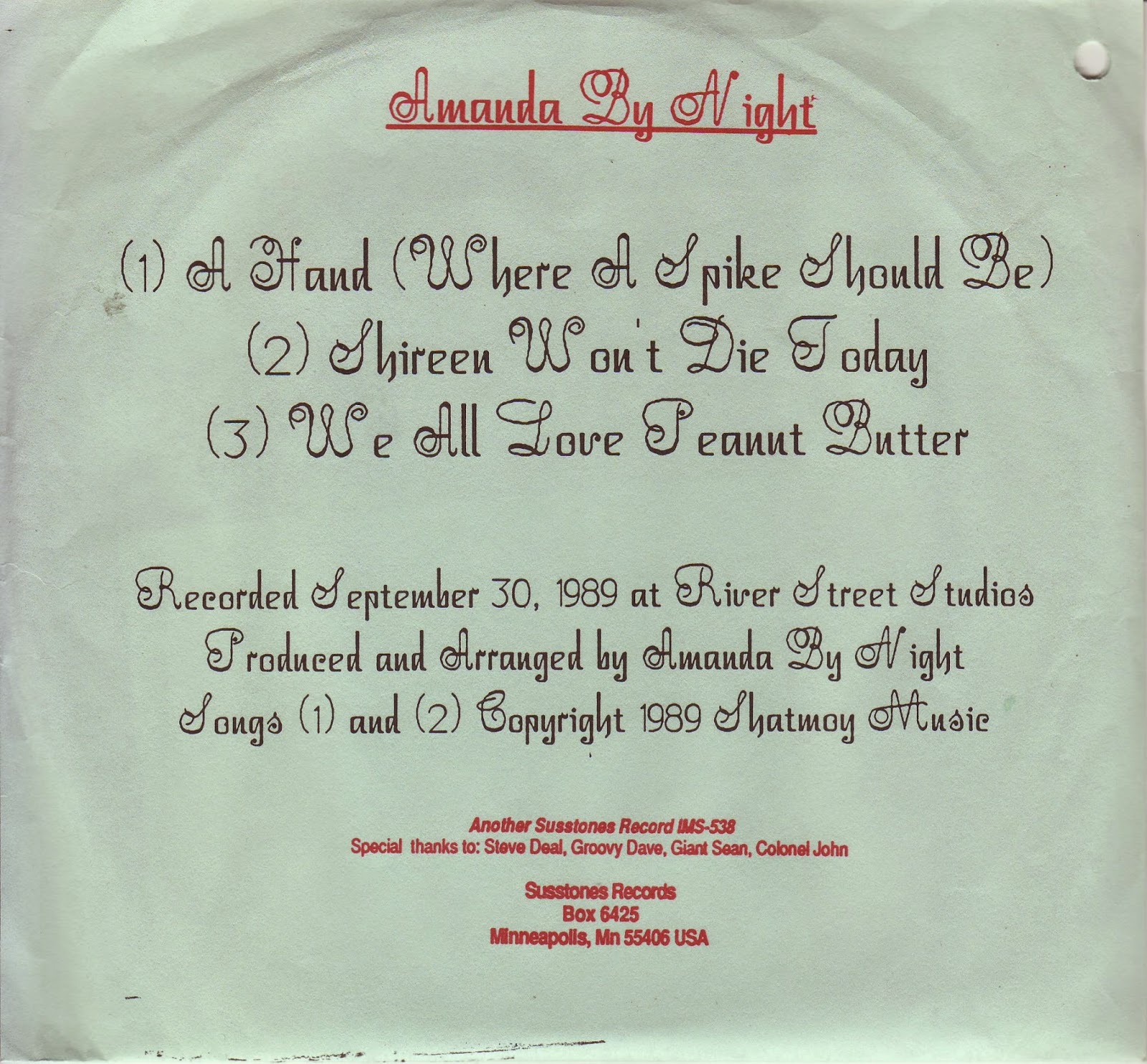 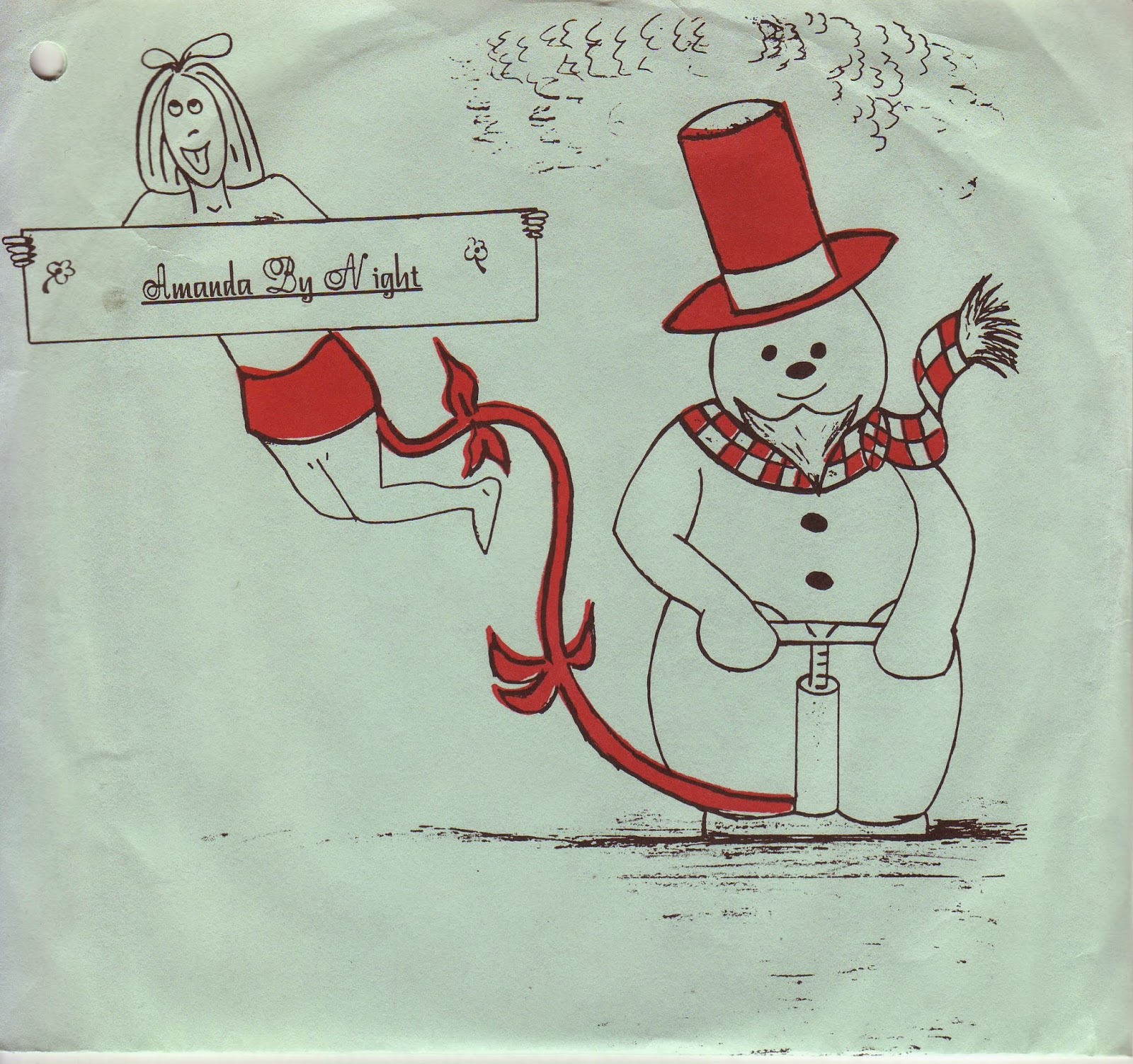 This early Susstones single is also a good candidate for worst graphics ever for a single. (though I'm pretty sure that it's difficult to get around the horrible that constitutes the entire Hypnolovewheel discography.) The thing is that the music within is not anything like you'd expect based on that shitty sleeve. It's kind of garage of varying amounts of competence and a cover of the One Way Streets "We All Love Peanut Butter" and a tender ballad in "Shireen Won't Die Today". The singer here is one of those garage singers who's not precisely one to be held back by bourgeois concepts like singing in key in order to convey what he needs to share. You'll laugh. You'll cry. You'll ignore this and see if you can watch the adult feature "Amanda by Night" instead. Everyone's a winner.

I had always assumed they were local up to this point since the label is local and there have always been copies hanging around, but Discogs says they were from Bridgeport Connecticut. I learned something new today.

Posted by Swinging Singles Club at 1:24 PM No comments:

Sometimes it's interesting to go back and google stuff that you haven't in a long while. I've had this lone single by Macs for some time. When last I had a particular hair up my butt to see if I could find any information about them there was nada. Maybe an entry in Discogs, but otherwise zip. 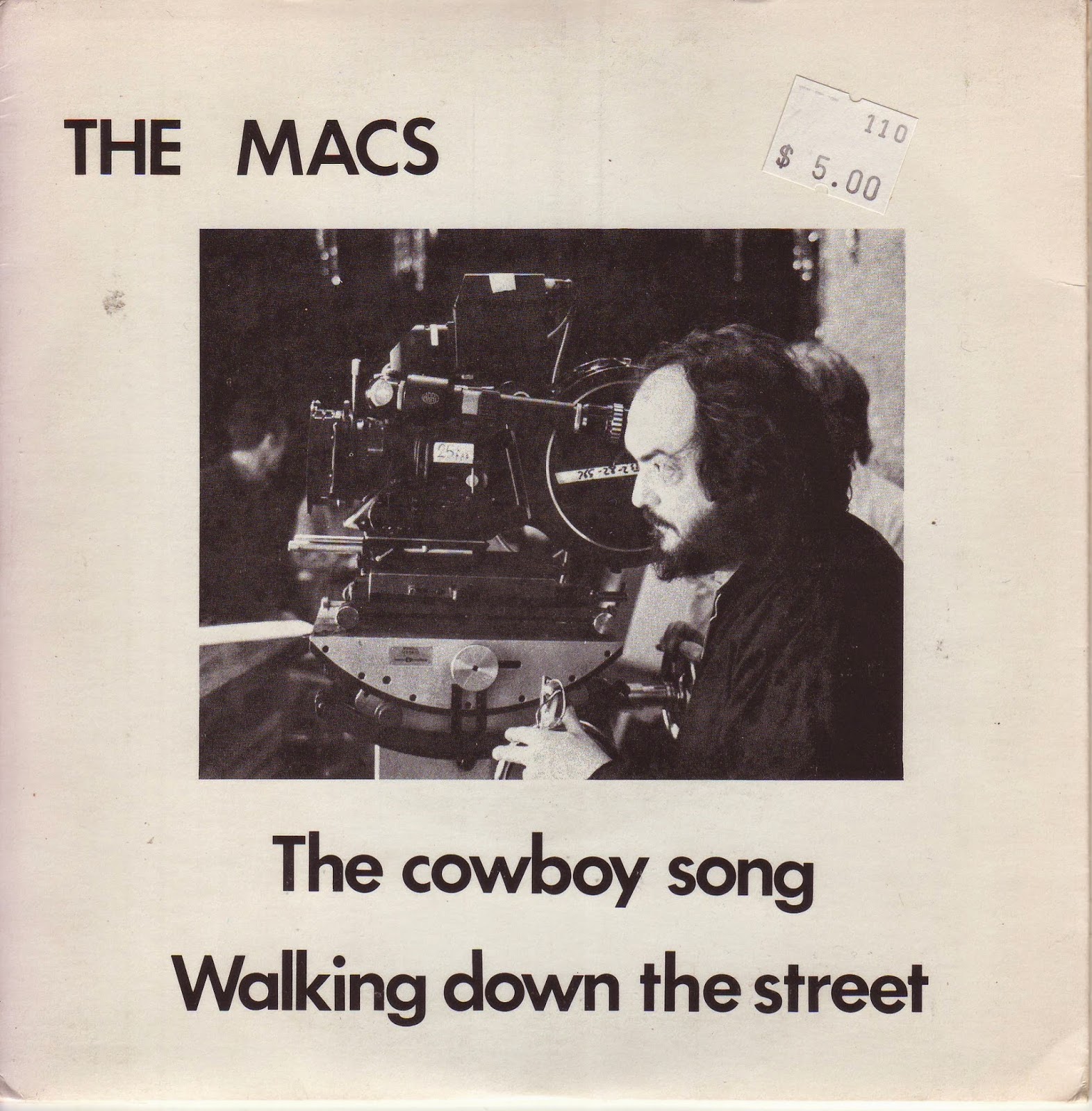 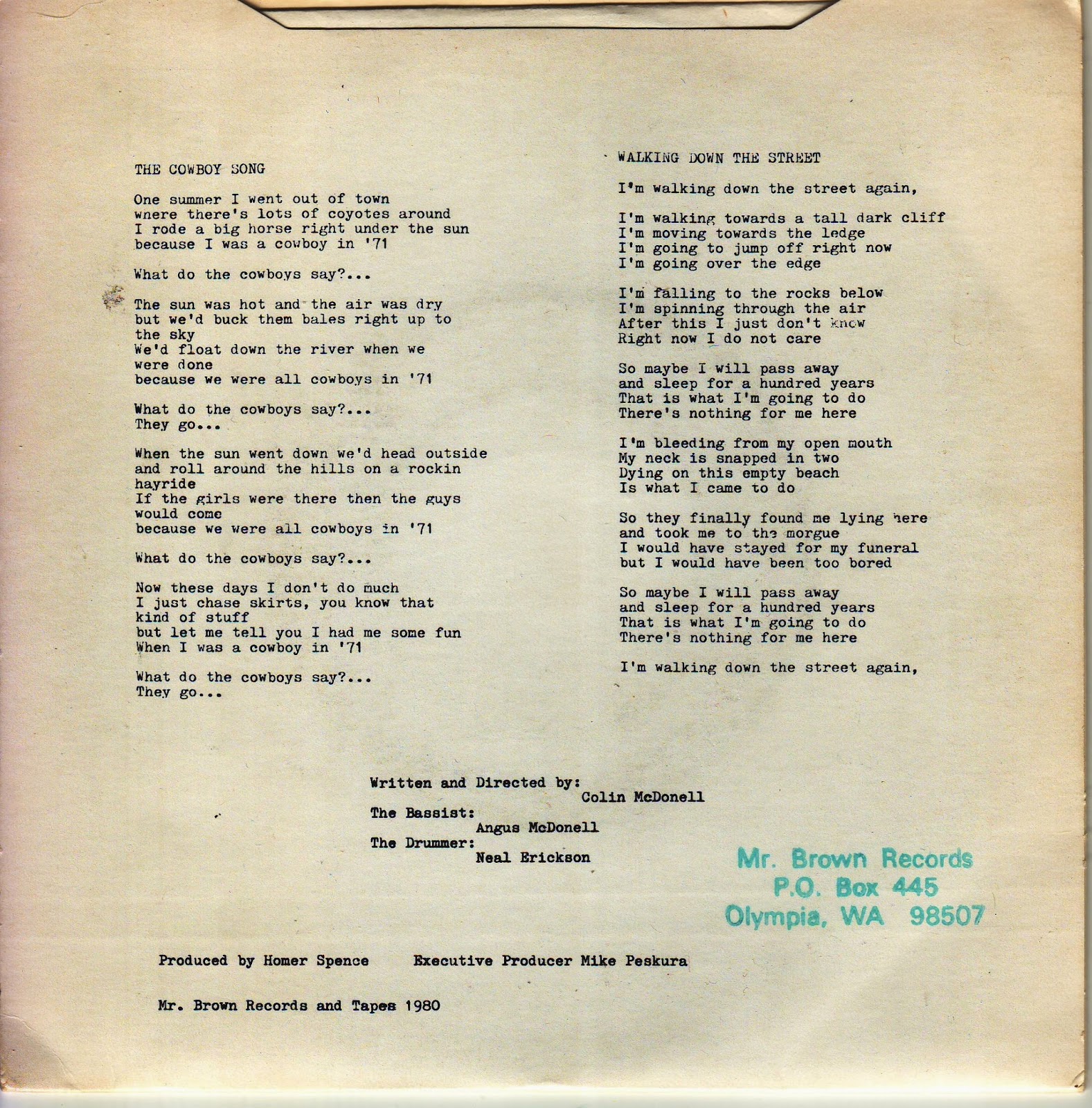 Now when I go to type this post what should I discover but a nice article entitled "Unraveling the Mystery of Forgotten Seattle Pre-Grunge Band The Macs". Now I don't have to type anything more. I like both sides of this. It's got a picture of Stanley Kubrick on the cover (probably filming "The Shining") What more do you want?

I just recently picked this one up. Last week. Played it for the first time when I digitized it. I know/knew nothing about the band, but the time period was right and the highlighted xerox cover spoke volumes. I think I paid twelve bucks for it. They were well spent. 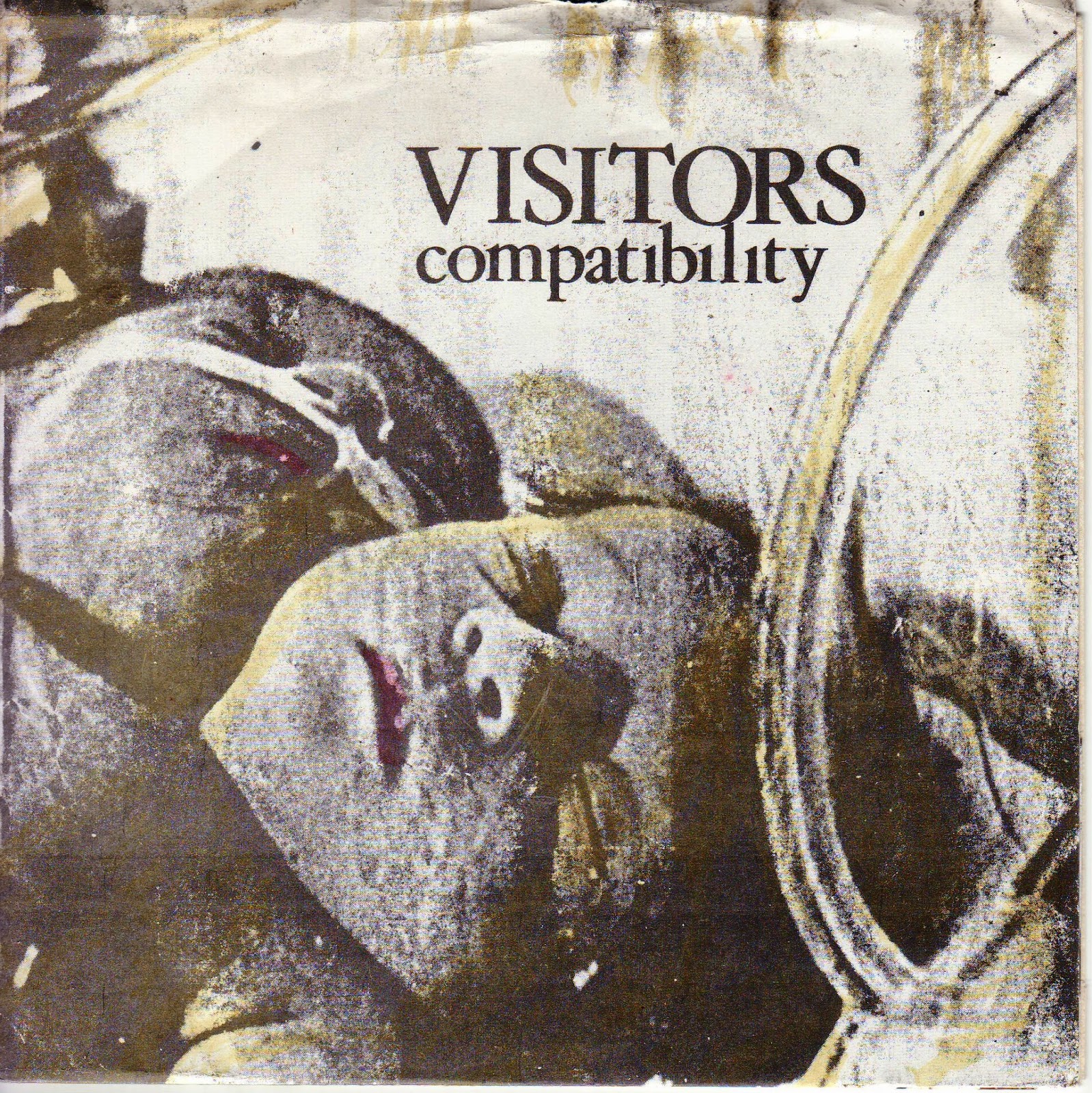 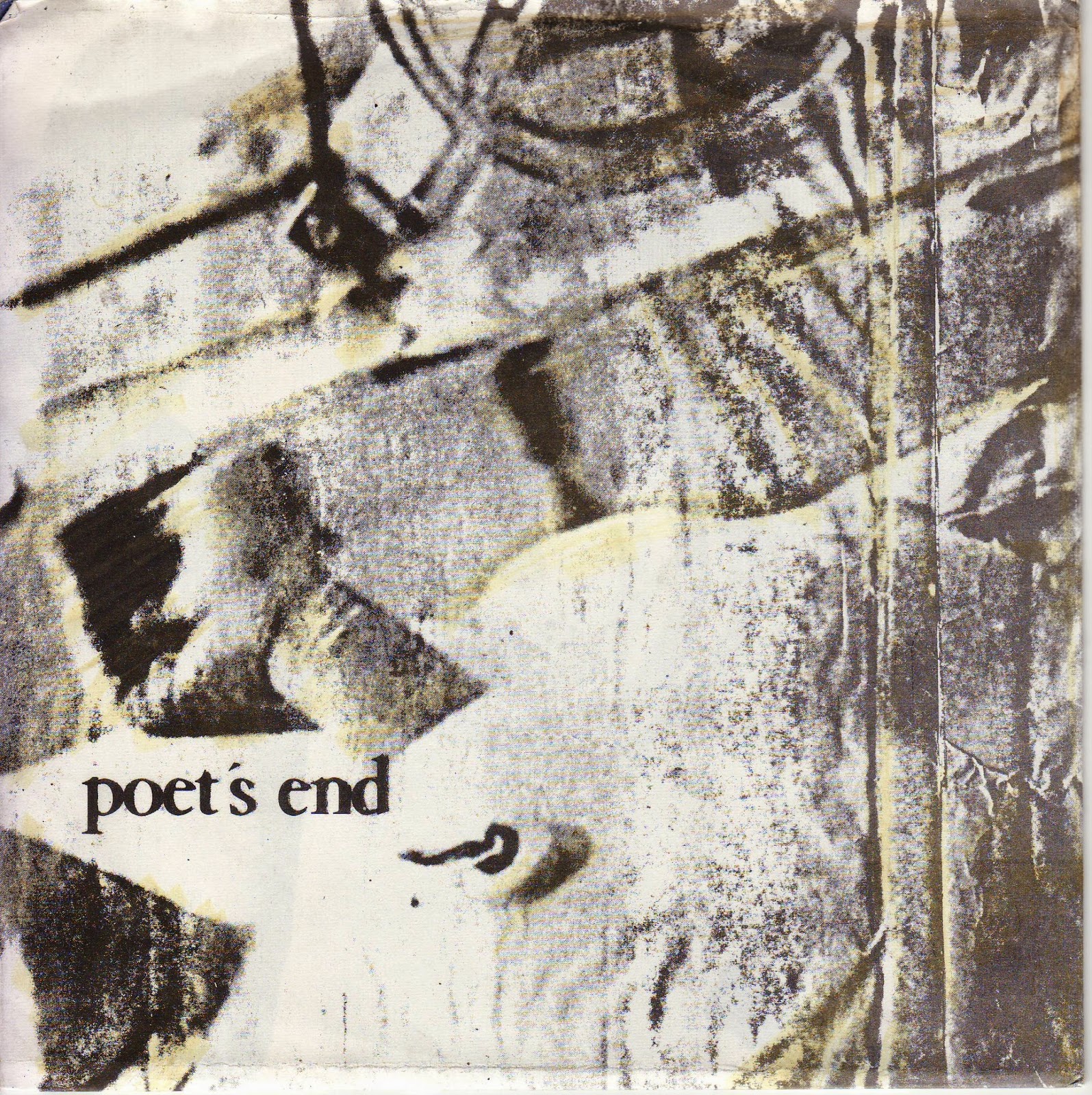 It's a fair bit of UK style DiY and what other people call Post-punk. Loud clanging guitars and a heavy back beat. It represents the third of three singles according to Discogs. I'm going to have to keep an eye out for the other two. It also seems that John Peel was a fan. They did three Peel Sessions and he purportedly financed their second single.

As I'm typing this, it's late August. This past week I went to Target Field and watched the Twins annihilate the Tigers 20-6. It was difficult to watch. So here's a couple singles by Detroit bands.


The Algebra Mothers (or A-Moms) were a rather short lived band that put out this one single in 1979. 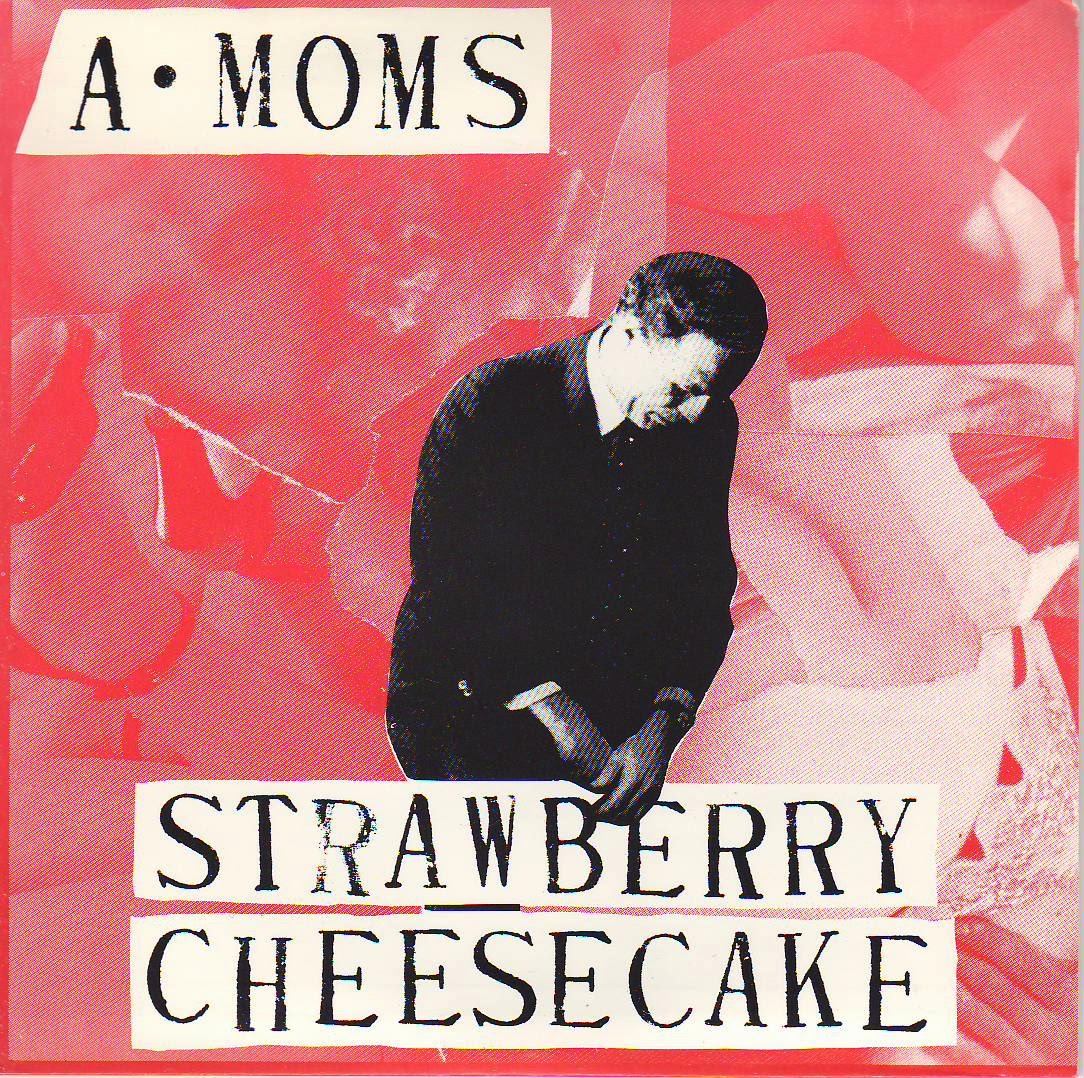 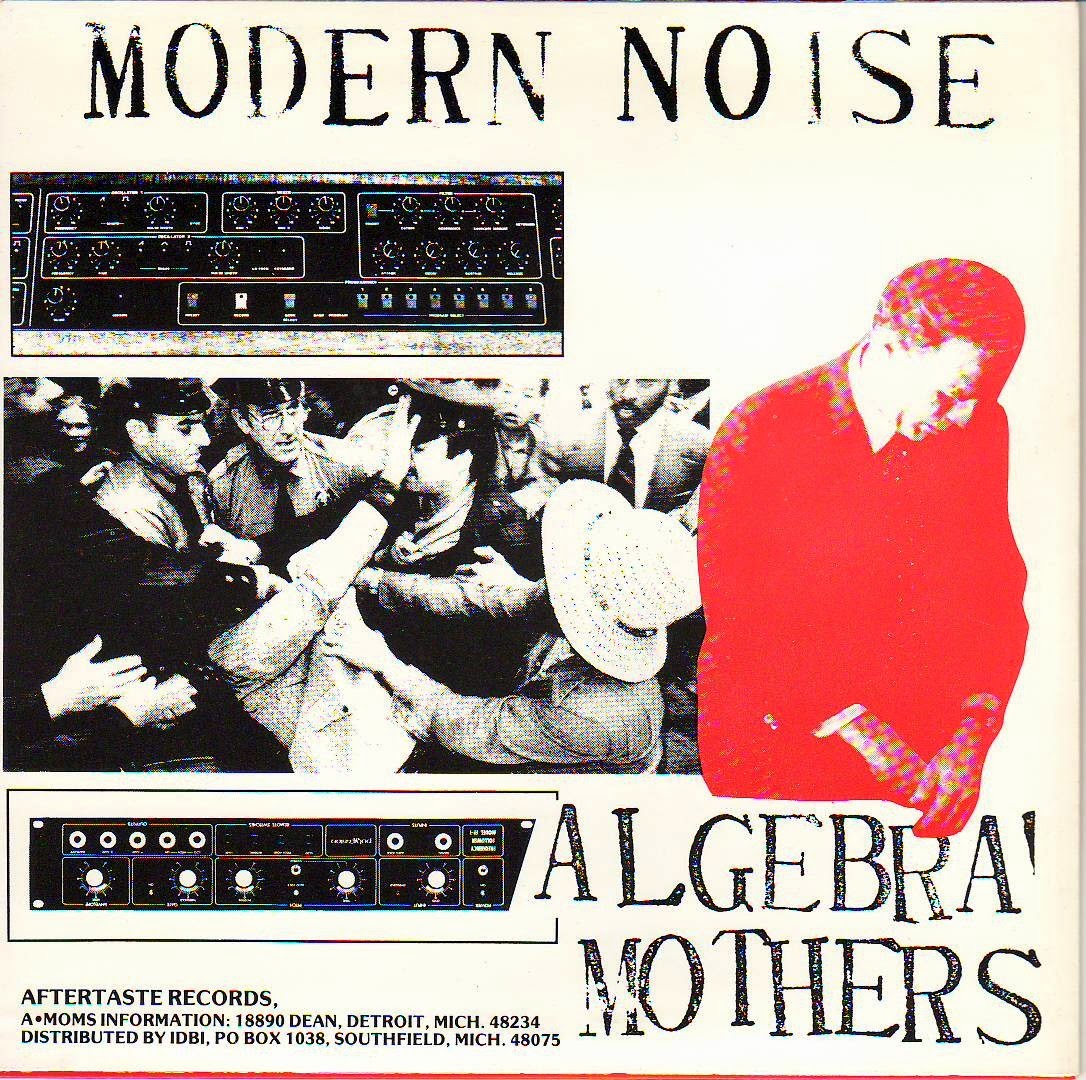 They were led by a black guitarist/vocalist by the name of  Gerald Collins. Given the amount of hype that's recently centered around the band Death, I'm surprised that nobody's dig deeper to unearth this monster. It's certainly to my ears more "punk" than Death who sound more like Thin Lizzy to me than anything else. Whatever. This is awesome sauce. Lap it up. It's the only thing they released.

I'm not sure how I came across this other single by All Systems Go. It may have just had a decent eBay ad and a low enough price tag to intrigue me. 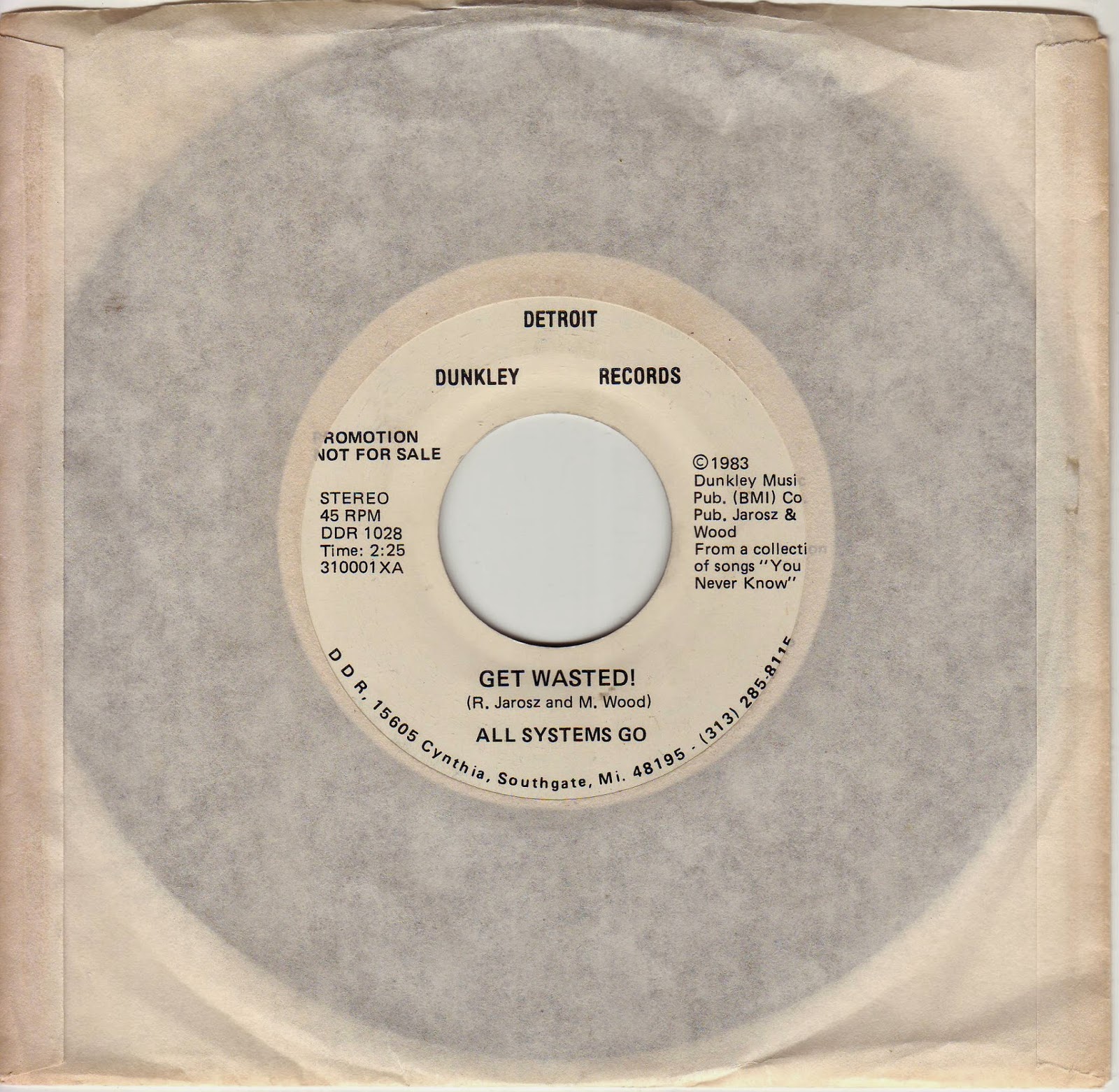 They appear to have been a blip on the recorded map (and not the same Michigan band currently using the name). There is also apparently a crappy picture sleeve to go with this, but I didn't get it. The song worth listening to is naturally the one called "Get Wasted". It's a snazzy little pop punk/new wave number extolling the virtues of imbibing alcoholic beverages for fun sung in a high voice befitting a cartoon character. The other side is however some kind of MOR crap that makes you wonder if it's even the same band. It's pretty miserable and included for the sake of completeness and to soothe my anal retentive tendencies. You can listen to it once and delete.


Your Funeral were from Denver, CO. They were three piece. The members were Jeri Rossi, Karen Sheridan and Cleo Tilde. They put out this really nice dark and somewhat gothic single in 1982 before disbanding. Jeri moved to Boston which is where I met her when we both worked at a sandwich shop in Kenmore Square for a while. I liked working with her. 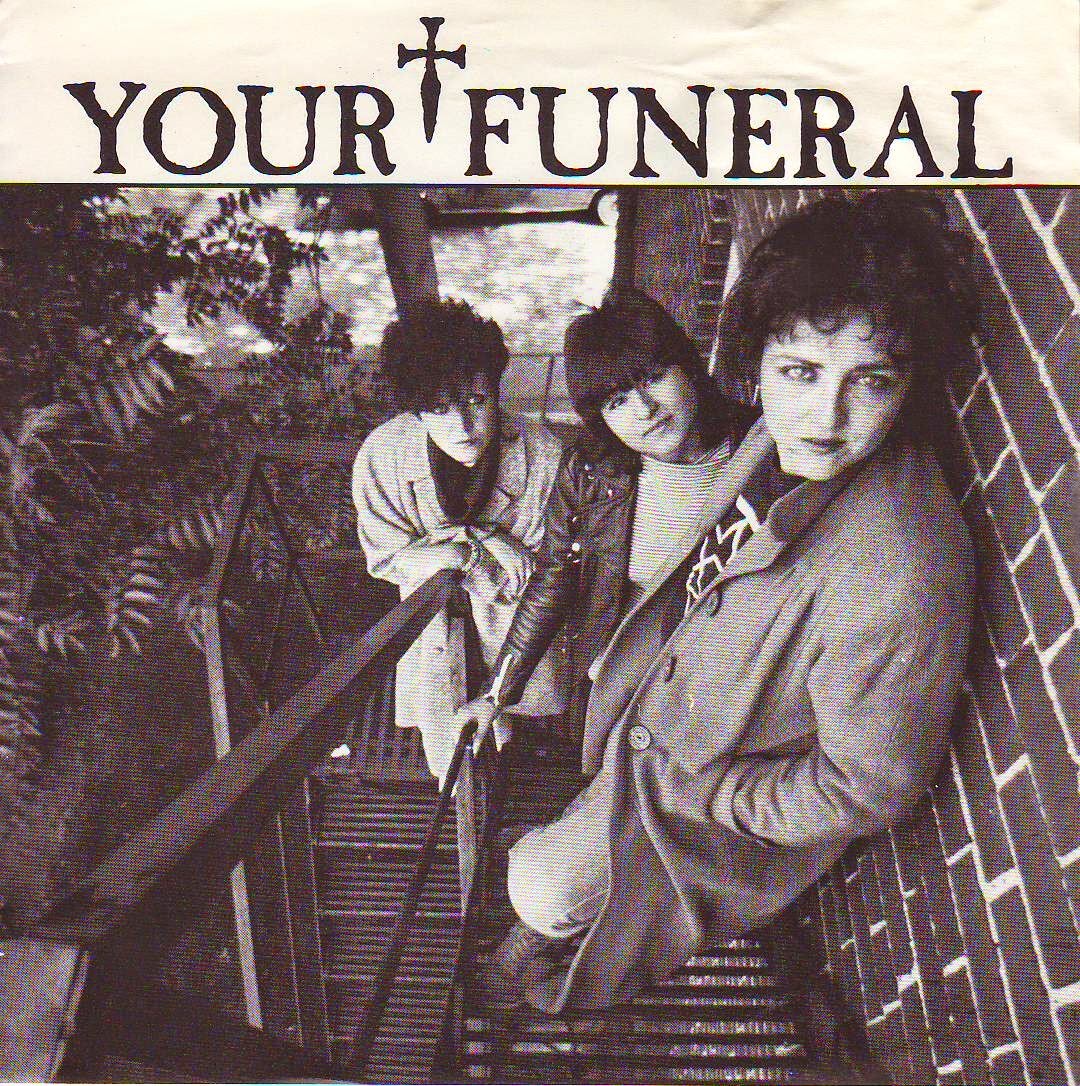 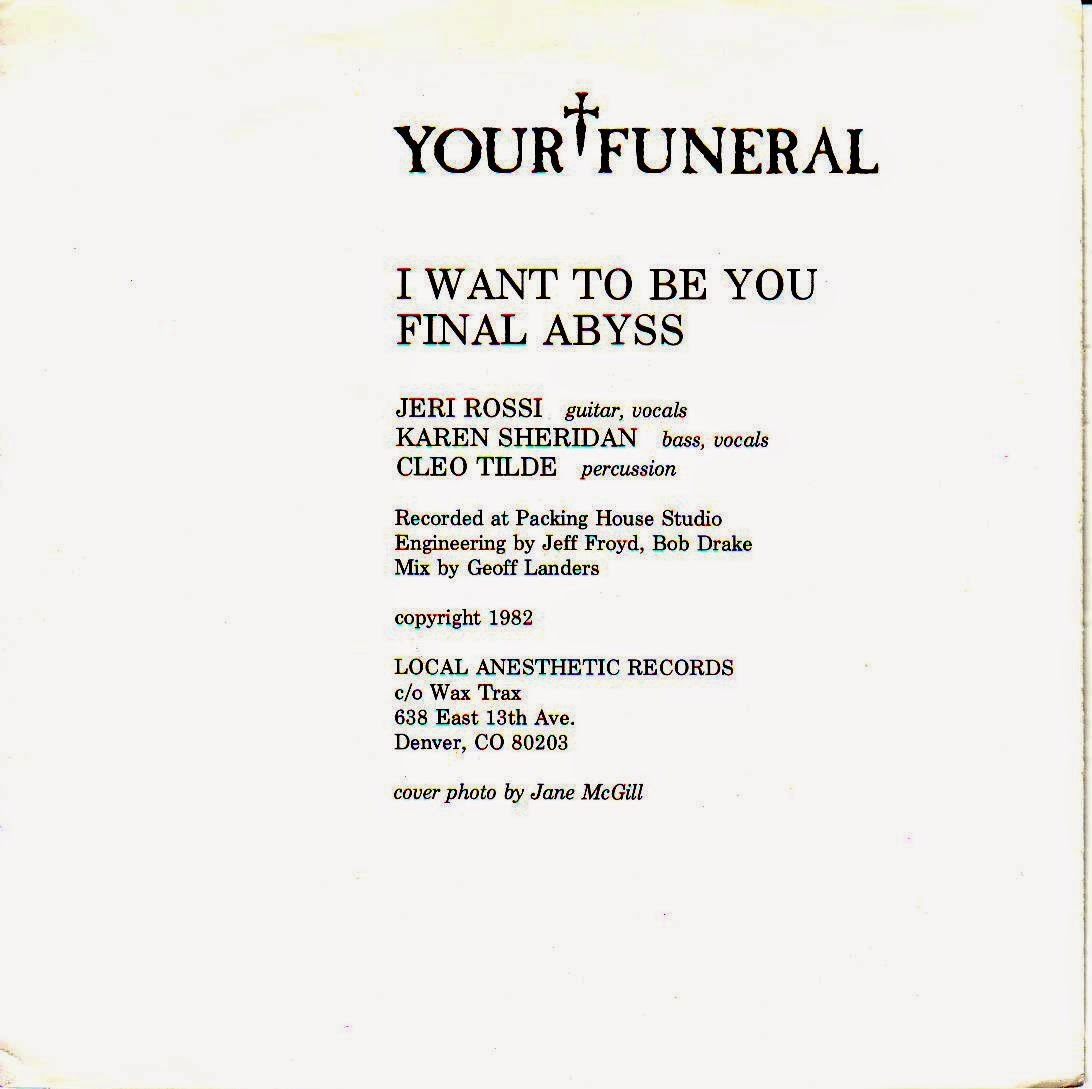 After moving to Boston she formed a really good band called Black Cat Bone. It is always a relief when somebody you're friendly with is in a good band so that you're not having to constantly make excuses why you don't go to their shows. Black Cat Bone unfortunately never got around to releasing any music, but they did make a video for their version of "I Want to be You" which is a lovely little time capsule of the mid-80's as experienced. Perfect Sound Forever did a long interview with Ms. Rossi a few years back. Read it.

There's probably not much to say about this single or this band. It's the first single. I love the A side. It's everything you could have loved about this band. The B side initially comes off as a total throwaway, but it's got a lot more going for it after a couple listens. Both sides got added to the reissue of the first lp. Buy that. 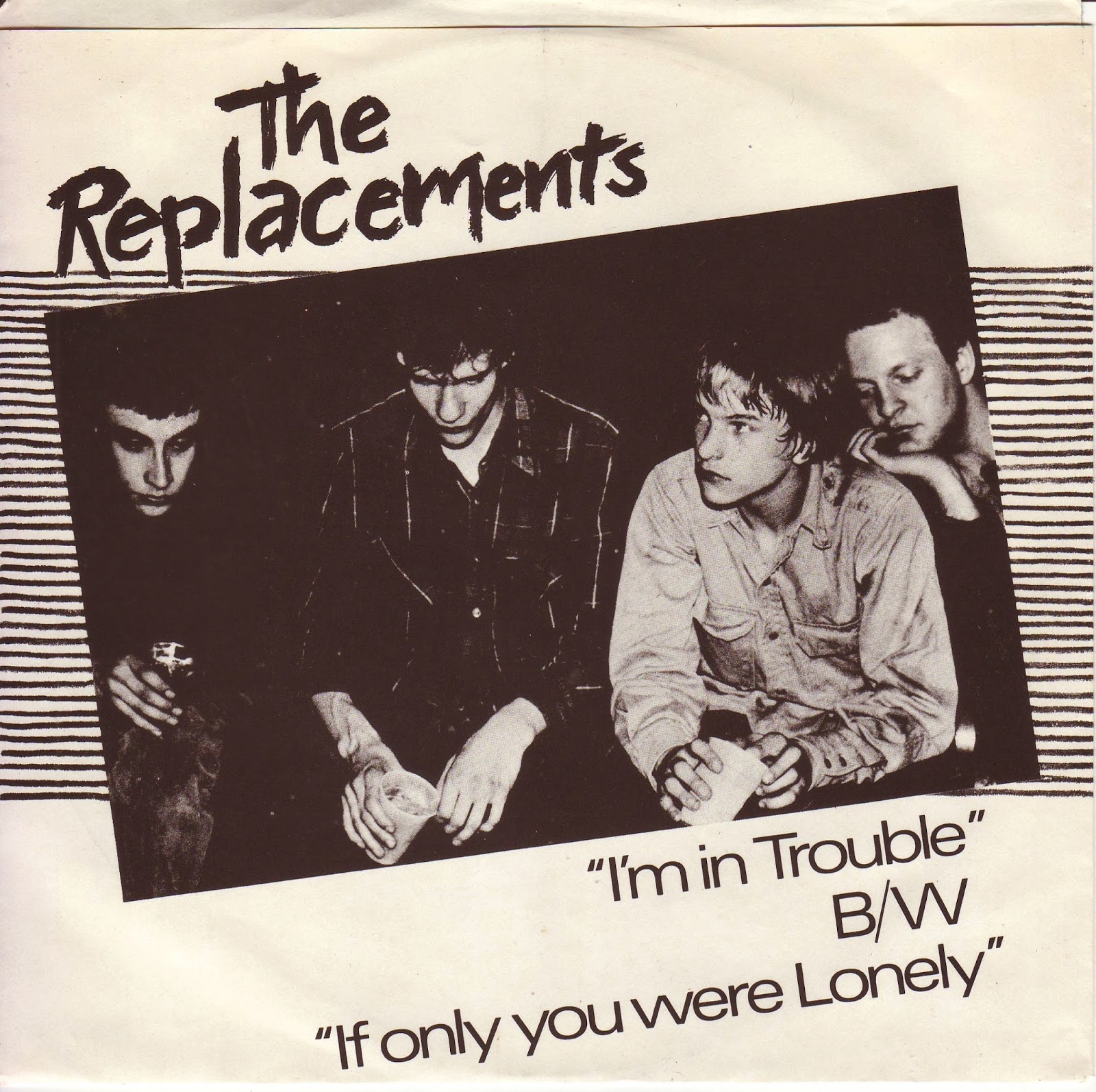 I'm not going to even type the band's name. (We'll see how long this lasts before some bot finds it and has me take it down.) I pulled it out because half the band has gotten back together to play a few shows, one of which is at the MN State Fair coming up (as I type this anyway in late August). It's not personally worth sixty bucks to me to see them now. I saw them twice in the 80's. One a smoking all ages show at the Channel where they were relatively sober and a second time after the major label debut where front man was so drunk he couldn't finish a song. The band kicked him off the stage and pulled up the lead singer for the opening band, Barrence Whitfield, to sing whatever songs they could figure out the both knew. It was an entertaining shambles of an evening.

(Today is a day I've set aside to get together a bunch of posts and set them up in the queue to start randomly appearing on whatever day I decide that something should show up. I'm doing a lot of posts right now in the beginning so there's something here and to give the few folks who come here (and the even fewer who partake) something to make it worth their while. (I think there's been around 40 odd page views and 4 dls of things posted.) I'm aware. I do it anyway.)

This first thing is about solo projects. And by solo projects, I'm talking projects by one person. One person with a personal and unique musical vision and no friends.

Amor Fati is latin for "Love of one's Fate" if wikipedia is to be trusted, which I do more or less. It's pretty straightforward. They've no reason to lie about something like that. It's also the name of the project by Amaury Perez that released this seven inch slab of vinyl in 1984. 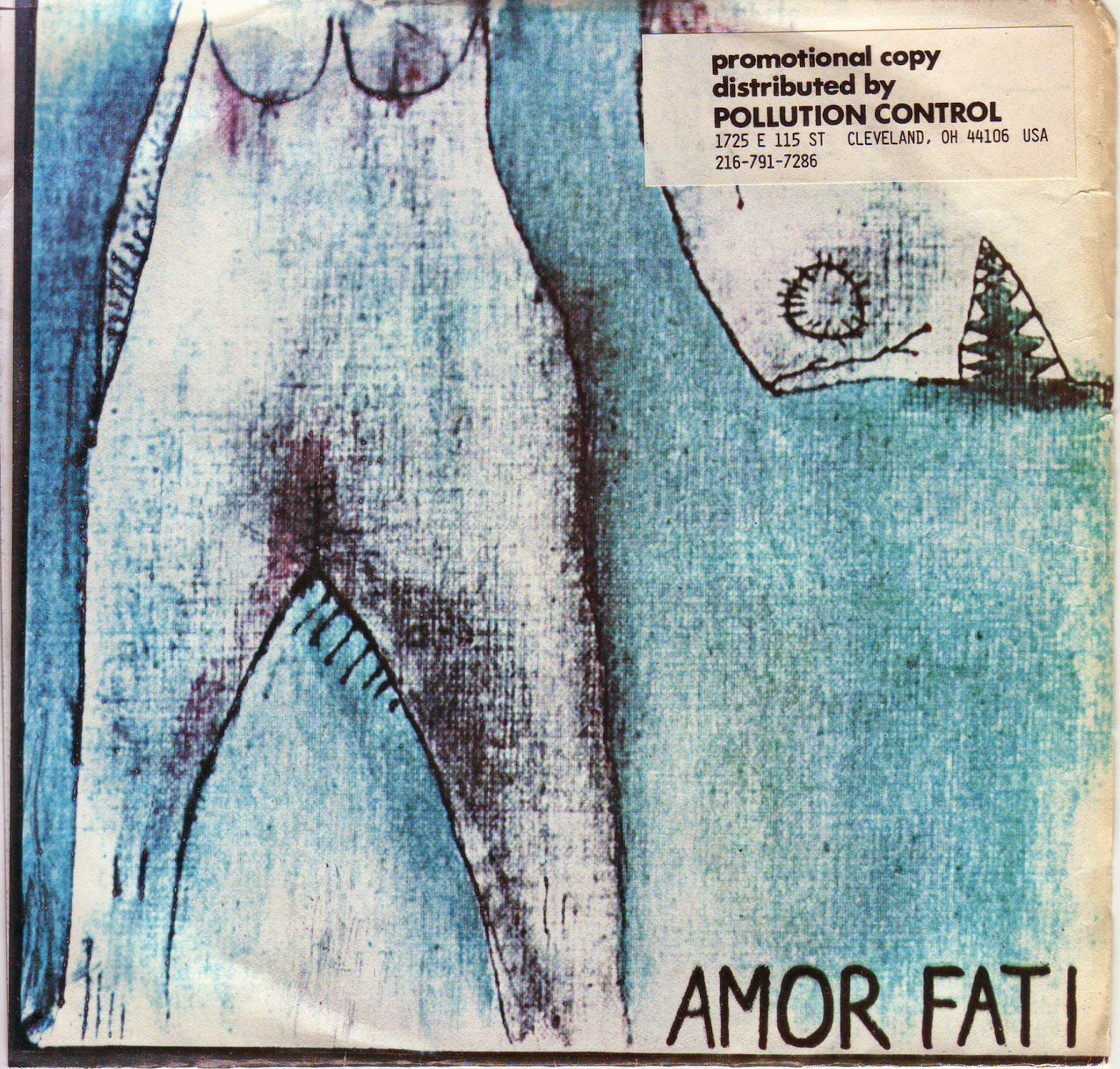 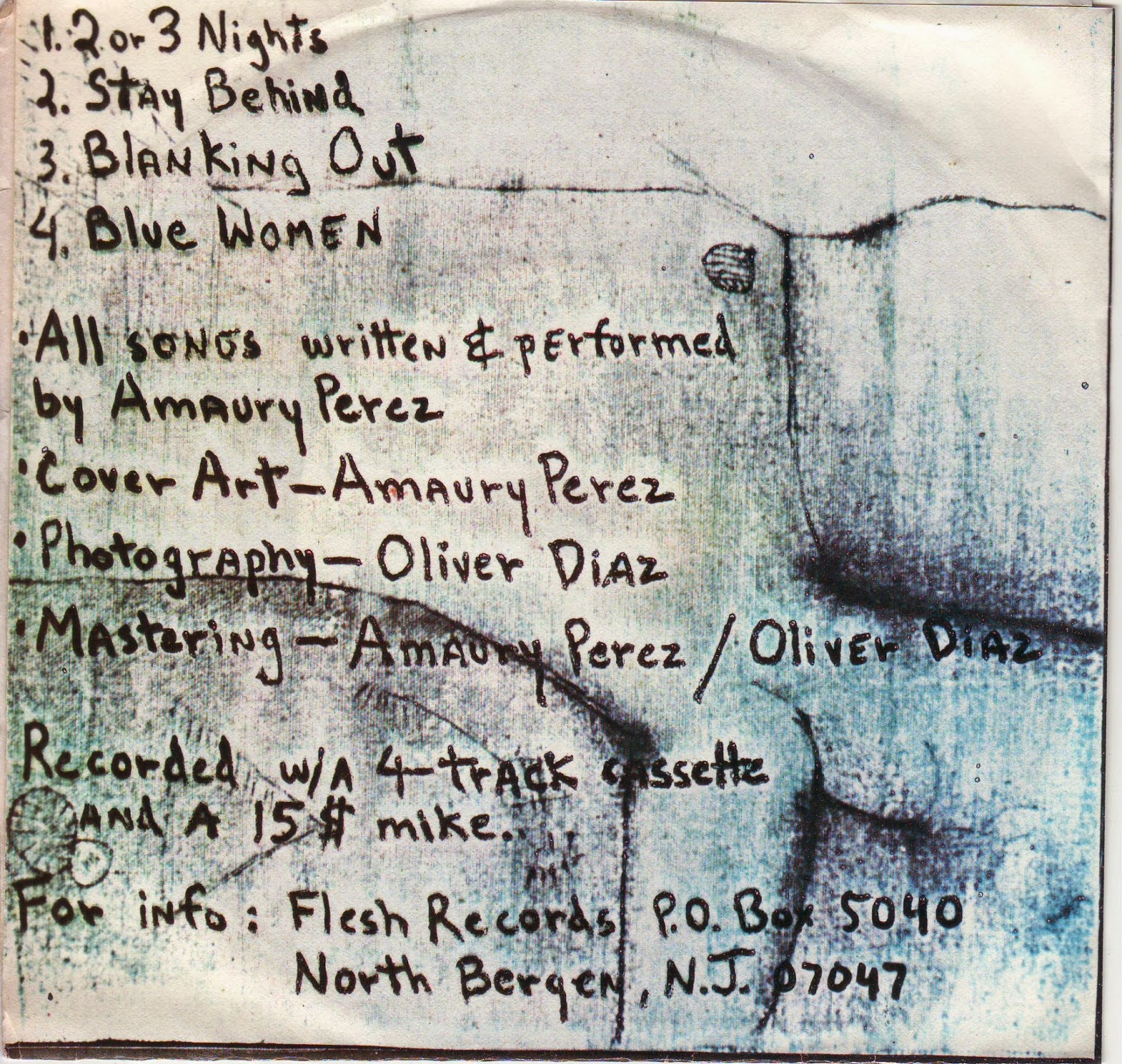 This is a one man band in the truest sense of the word. One dude and a what had to be a very early 4-track cassette machine. I'm betting it was expensive at the time. (They certainly still weren't cheap when I got my first one four years later.) And done with a $15 mic. It's what I imagine happens when you've got access to some instruments and a the first few PiL lps. (I'm willing to bet that he sprung for the full on Metal Box version of the Second lp.) More power to him. He even did the art work on the color xeroxed cover. Dude was a renaissance man.
"Blanking Out" is the standout track for me, this time through listening to it. It's got the most oomph to it. But over all I appreciated this much more than I think I did when I first got it many years ago.

If you like it, Amaury is apparently still making music. He's got an album up for cheap on Bandcamp. Go ahead and buy it.

Then we have Asbestos Rockpyle. They seem to have been the vision of a gentleman by the name of Paul R.W. Clarke. Despite the super punk rock looking cover, that's not what you get. 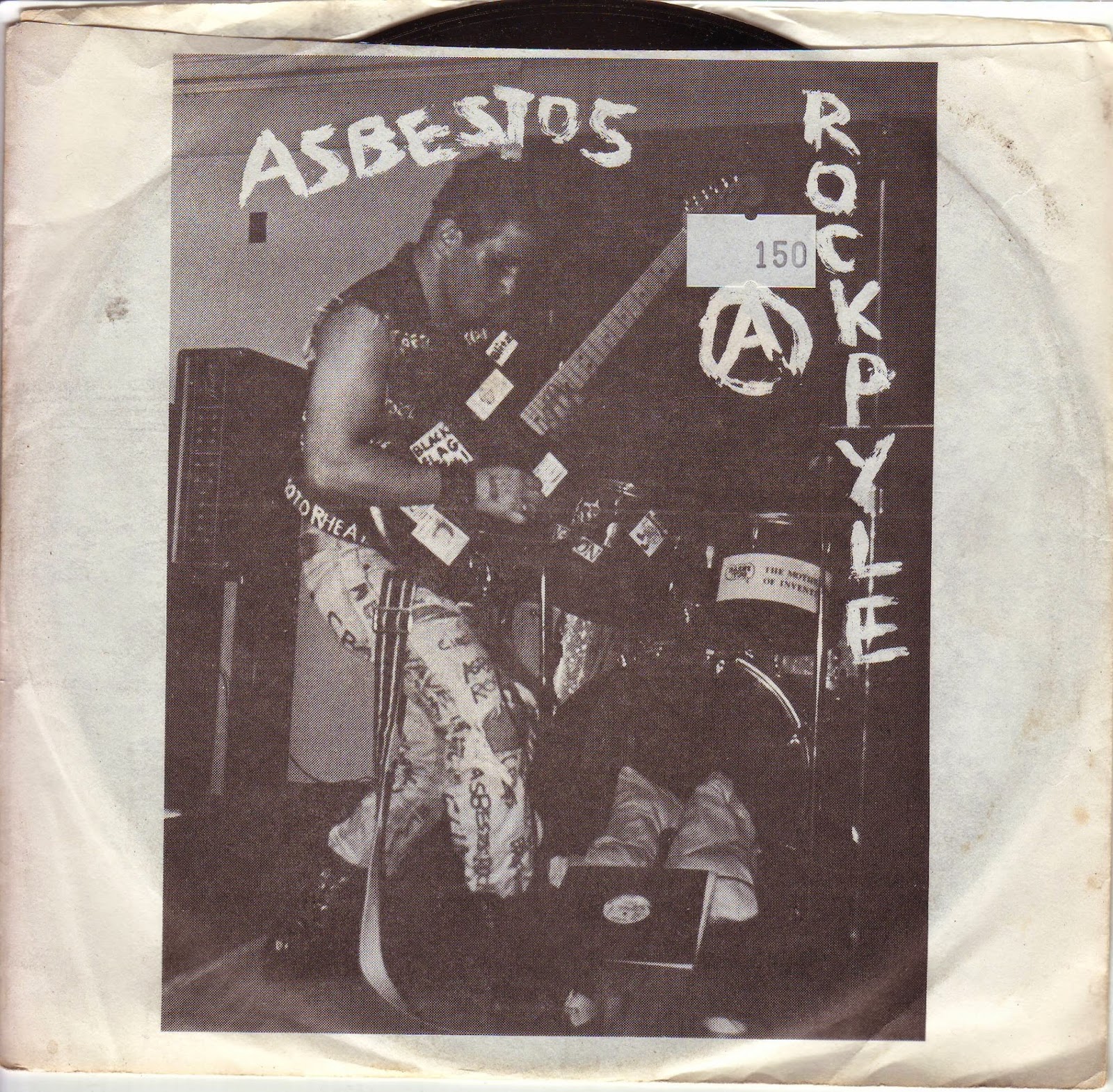 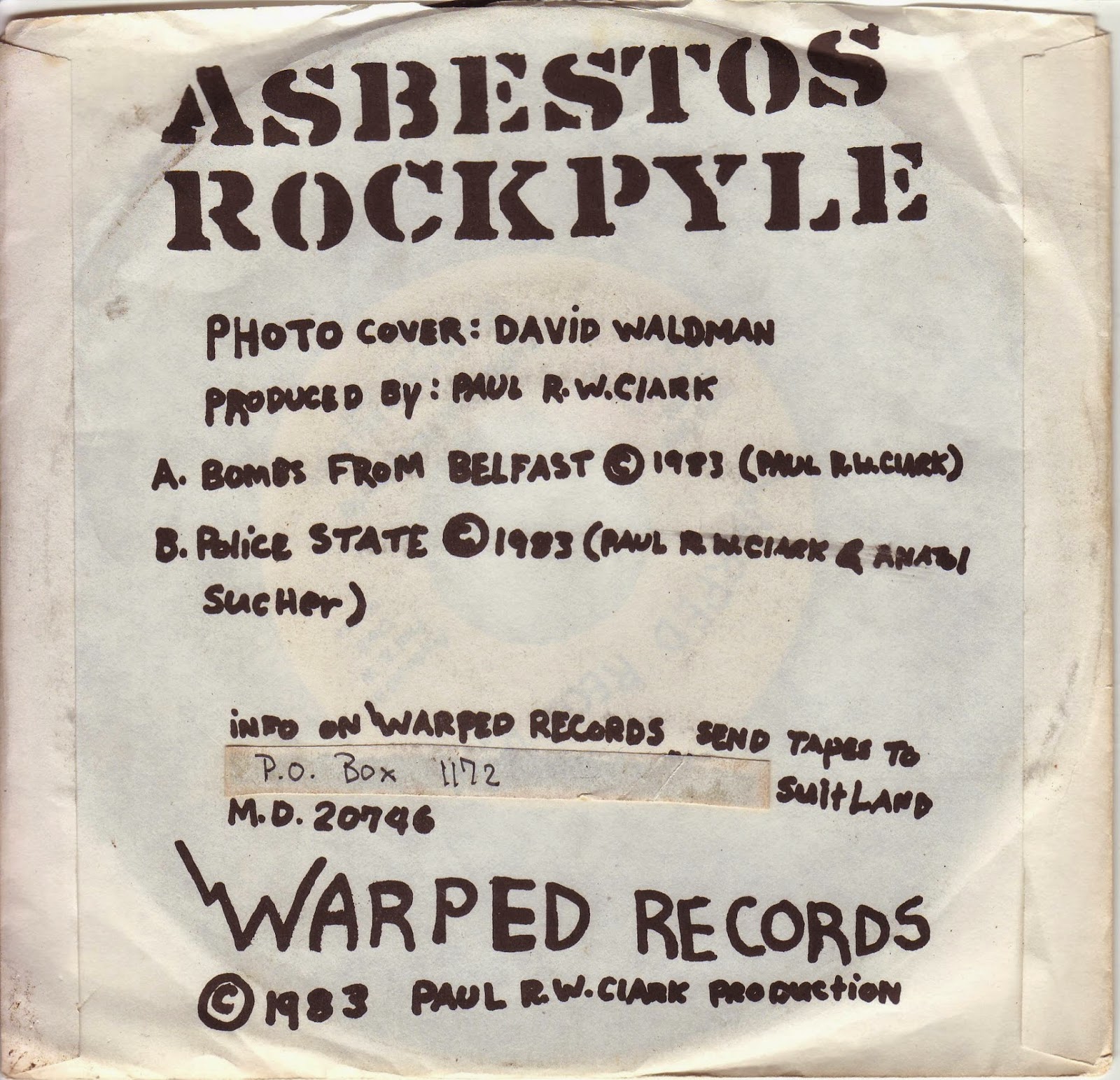 This is entertainingly bad. You have some distorted guitars and incompetent playing, a drum machine on the b-side and a faux English accent singing some protest songs. A hippy with a mohawk. But it's the painful earnestness of the guy as he tries to convey his message that makes it. It's car wreck that you can't quite bring yourself to turn away from. Your mileage will vary, but remember delete is always an option if you can't hang with the big kids.