So this is the year we get an extra day of February.
Hoo-fucking-ray.

But there is more. With this post I will have (if this thing hasn't been shut down by the Man at some point in between) queued up a new post over a full year ahead of time.
It's 3:49am on the 26th of February, 2019 as of this particular sentence.

So like some weary musical ghost ship on autopilot this meandering hulk of half assed bullshit can continue on without any fresh input from me for one entire journey around the sun. Four full seasons (more or less) will have come and gone before I need to add to the pile.

Hopefully I used that year constructively. (My hope is to use it to make my own terrible music and digitize and preserve the umpteen volumes of cassettes dating back to 1988 I've made which I'm not going to put up here. You're welcome.)

This day is also a year and a day (though for me currently still a couple of days off) since I had the opportunity to see the Chills for a second time since a truly memorable and top ten experience seeing them in 1990 in the 7th St Entry after "Submarine Bells" was released and the last show they were sharing on the tour with Blake Babies (who I vaguely knew back in Boston since I'd worked with their first bass player, Seth.)

Which leads me to this post.
I feel like I want to do something kind of special with it 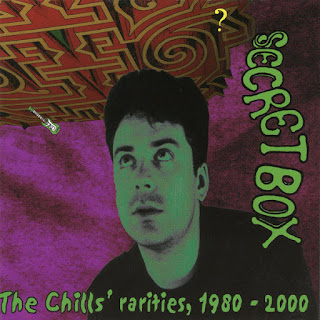 So today in honor of my upcoming (as of this typing) chance to see the Chills after a number of decades I'm posting the limited, had to buy it directly from Martin himself in 2001, three disc set of Chills rarities and live tracks with umpteen tracks that were never recorded in studio.

My physical copy is in the other room, but it's one of the initial signed numbered ones. I sent Martin a check for something like fifty US dollars and a while later it arrived in all its glory.

People are also asking absolutely ridiculous prices for it on Discogs right now.

If I were asked by Numero Group to spearhead some reissues this would likely be my second pick right after the Dolly Mixture "Everything and More" triple disc set that came and went in a heartbeat. (and I missed). That'd be huge.

But nobody asks me.

At that time in 1990 they also did a short in-store performance at Oarfolkjokeopus. It was a lovely low key affair. At one point Martin was at a loss as to what to play next. I offered "Green Eyed Owl", but that version of the band didn't know it. It's still my favorite Chills song....
Posted by Swinging Singles Club at 5:26 AM No comments:

I'm Not a Fan of February.


It's the shortest and the longest month. It's the point in the year where I'm generally just completely over being cold and it being Winter and it just keeps on snowing and snowing.
Made even worse this year since it's a Leap Year and there's a whole extra day of the scourge that is the second month.

This calls for happy pop music and a few moments of blissful forgetfulness that I may be called on to shovel a foot of wet miserable winter off the driveway at any moment.... 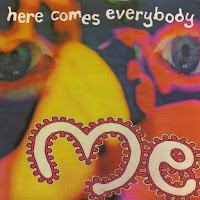 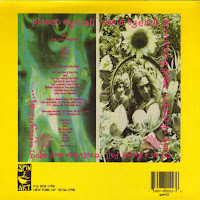 This is sweet harmonic pop music. Joyous and happy.
Very unlike my mood.
but it helps.

They put out three full lengths and a handful of singles in their existence and are almost entirely unknown.

Probably because they named themselves "Me" which doesn't make it any easier to look them up on the internet.

That and it's the very sort of harmony filled pop that would get entirely lost in the shuffle of everything else that was going on at the time competing for people's attention.

Let it wash over your weary soul. 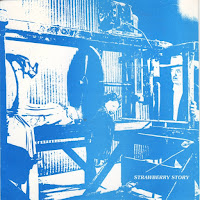 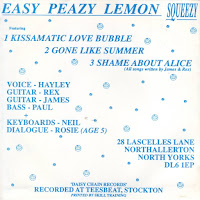 You have to appreciate a record that when it starts out you wonder if you've got it actually at the right speed. The first song on this ep by Strawberry Story is just that. Very fast, lo-fi and buzzy.

So with nothing else to stop us... One, Two Three, Four Strawberry's Let's Go!

Posted by Swinging Singles Club at 4:22 AM No comments:

Rock Along the Hudson

Probably not a place you think of very often unless you live in the area or need it for a crossword puzzle or something.

Here's fourteen inches of reason to think about it. 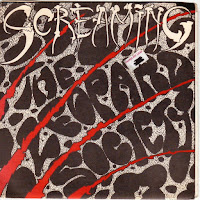 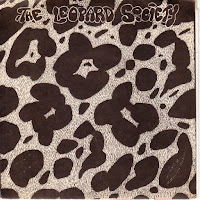 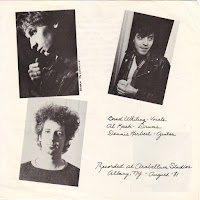 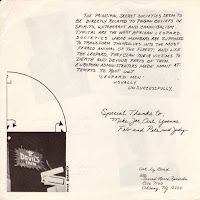 I included pictures of the insert.

One guitar, a drummer and vocals. Named after a cannibalistic death cult.
It doesn't get any more badass than that.

"Screaming" was covered by Sweden's favorite garage band the Nomads in 1999.

You can take that as about as fine a recommendation as any I could ever give you. 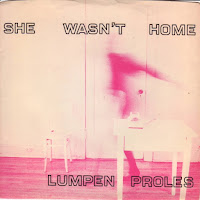 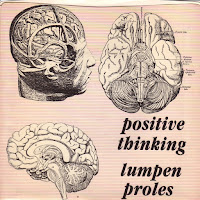 Probably sharing a stage at some point with Leopard Society were the Lumpen Proles.

They had a song on the "Live at 288" compilation from last August.

They're named after a Marxist concept of the unthinking underclass who are exploited by reactionary and counter-revolutionary forces. (In today's America they can be easily identified by their distinctive MAGA hats.)


Let that be your guide, comrade.

Posted by Swinging Singles Club at 3:18 AM No comments:

Stuck in the Middle


After a couple of Bi-Coastal posts we pause for a moment and wonder:

"What about the fly over country? What was going on there?"

I have an answer 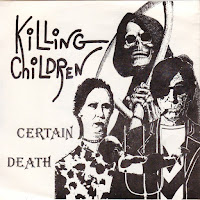 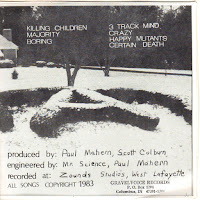 Killing Children were from Columbus, Indiana.
Accept no substitutes or alternate Columbuses.
This is the only one.

It's nice to add some straight up punk rock to this mix now and again.
Keeps life interesting

and speaking of interesting 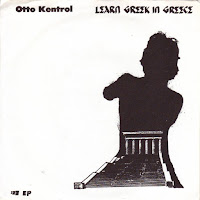 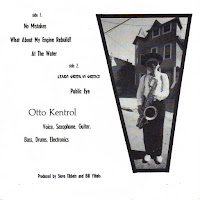 Otto Kentrol is the nom de saxophone of one Bill Ylitalo who went on to play with a shit load of other bands including Appliances SFB & God is my Co-Pilot who I've posted before. (I'm pretty sure I did anyway. You look and tell me...)

This is fractured weirdness that tickles my fancy like a fancy French tickler in my earholes.

Damn it. Now my ears are itchy.

Posted by Swinging Singles Club at 3:08 AM No comments:

Email ThisBlogThis!Share to TwitterShare to FacebookShare to Pinterest
Labels: 1980, 1983, Columbus, IN, Milwaukee, WI


It's the day before Valentine's Day. 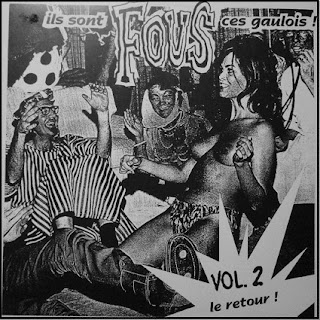 Here's the second volume as a companion to the previous volume I posted last month.
It's more of the same only there's even a band from the Belgian Congo.

Upend this record and let it flow over your beleaguered mind like so much absinthe over a sugar cube.

You'll hate yourself in the morning
But probably not much more than you already do.
Posted by Swinging Singles Club at 3:39 AM No comments:

For the Bi-Coastal Punk Rock Novelty Lover in Everyone 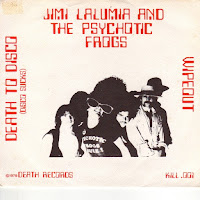 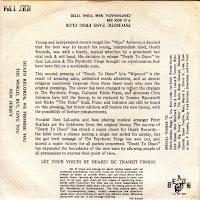 Jim Laumia & the Psychotic Frogs echo the sentiments of a lot of people and then proceed to back it up with a cover of "Wipe Out". From New York City.

There is nothing intrinsically wrong about any of that. 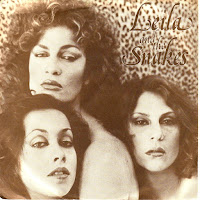 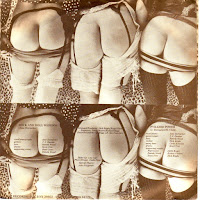 Leila & the Snakes were from San Francisco.

For kids today, the flipside may need a bit of explanation. In more innocent times of the 70's there were some hippie types who believed all kinds of ridiculous New Age bullshit like the power of the shape of a Pyramid to do magical stuff.

At the very least you can play the marvelous guessing game as to which ass on the sleeve belongs to which lady on the cover. Keep you busy for a little while at least.

Not ever knowing is half the fun
Posted by Swinging Singles Club at 2:33 AM 1 comment:

This post is of two bands with releases in 1981 from each coast of the continental United States. One based in New York, New York and one based in San Francisco, California.

It is not in any way related in any way shape or form to the 1980 record "Bi-Coastal" by the late Peter Allen which was the first album he released after divorcing his beard, Liza Minnelli and coming out of the closet. Which was great for him, but not much of a surprise to anybody (except maybe Liza.)

This record was a particular favorite of my mother who would play it quite a bit on the 8 track in her Pontiac.
I loathed it.

And still do.
It's dreadful stuff. 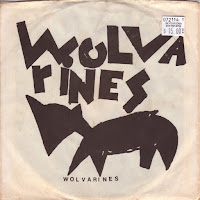 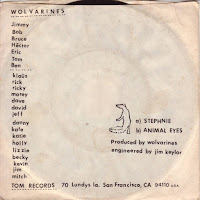 Wolvarines were from San Francisco.

They made a primitive pop noise and left almost no physical record of their existence beyond this sole seven inch vinyl record.

However a diligent five minutes of intense googling did unearth a short section of a live radio broadcast which can only add to the mystery. 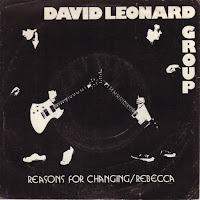 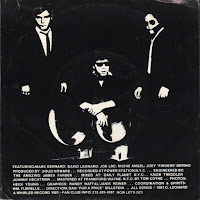 Meanwhile on the other side of the country and the other other coast...

David Leonard and his group were making a much more polished power pop sound in New York City.

There's a more recent picture of him in the gallery section where he's playing through a Supro Thunderbolt amplifier. I can't hate a dude who plays a Supro, even if it's one of the new revived ones rather than the old school ones I've owned and treasured through all those years gear snobs would sneer at them. Now they're cool and valuable and I've been vindicated. Suck it gear snobs.

Posted by Swinging Singles Club at 2:33 AM 2 comments:

Not All Maps Can Be Trusted


It seems that there is an odd and unfortunate trend in cartography of late where some maps leave the country of New Zealand off of them.

Which may or may not make you wonder if it really exists in the same way we established the existence of Ann Arbor in the previous post.

Cartography is a science after all, so perhaps New Zealand has been some kind of inside joke among cartographers for years. Like "Here be Dragons" or Finland. 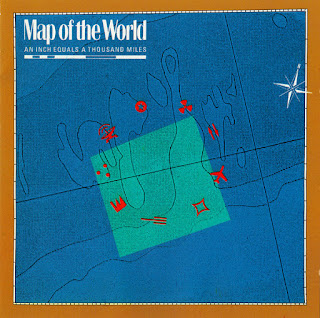 So at some point Map of the World, who we know from photographic and aural evidence did in fact exist, made the jump to Atlantic Records in the intervening years from the previous post and plopped out this Elongated Player to little or no success before being sucked into the void.

It's more of the same pop stuff as the previous records done with a larger budget and a bit more production.

Unfortunately this was around the same time Grunge happened to enter the popular consciousness.

They didn't stand a chance.

Take a moment and listen to what you missed.
And enjoy a nice studio version of "Stop Thinking Now" which is the song they did on the live compilation that first brought them to my attention.

Posted by Swinging Singles Club at 2:25 AM 2 comments: