The early 90's and some Cd's for a change

It's my contention that there is and has been some quality music that occurs/occurred in the Twin Cities even when nobody is paying the slightest bit of attention. Not even the people who actually live here.

So I moved out here. "Grunge" is the new big thing. I have a roommate who plays fucking "Bleach" three and four times a day.
Loudly.
Just kept flipping the thing over and over and his friend would come over and they'd play it a few more times.
I loathed that Lp.

My head was elsewhere.

The Hang Ups were the first local band that I gravitated towards. 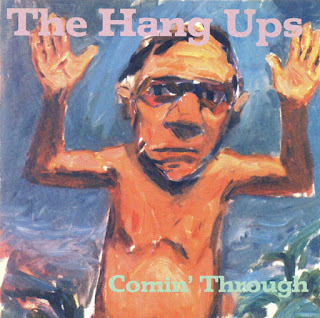 
I heard a song on the local college radio. They had a short demo cassette (which I should still have somewhere if I apply myself to looking). They ended up being friends of friends and I saw an early show in somebody's living room at a party. The songs were simple catchy wistful songs about girls with some really tasteful guitar filling going on.

It hit all the right buttons for me at the time.
Still does. 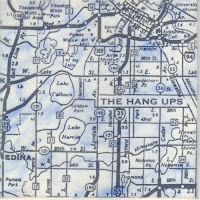 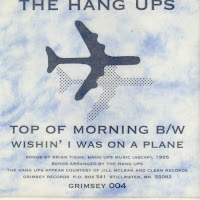 The A side here was on that demo and was one of the songs that first caught my ear.

When I was doing the digitizing and got up to the Hang-Ups I was intending to just put this one up and kind of leave it at that, but when I played it everything kind of flooded back and I remembered why I like this so much in the first place. It was at that point that I figured that I may as well just put up everything I had. It needs to be heard by more people.

So if catchy strummy pop songs with harmony vocals are your thing, then buckle in.
There's a few of these ahead of you.
Posted by Swinging Singles Club at 9:53 PM No comments: 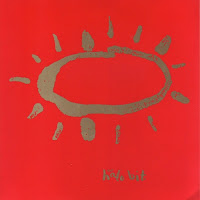 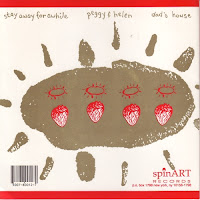 So this is the 2nd band formed by Alex Kemp following the demise of Small Factory a couple of years previous with a brief diversion into one called the Godrays (with Small Factory drummer Phoebe Summersquash which is either an alias or the result of bad hippie parenting.)

Like all the other bands, it's pretty earnest. That's not necessarily a bad thing. They wear their hearts on their sleeves. It's nice to listen to, but I'm not sure that I'd recommend dating them lest you find yourself immortalized in the inevitable break up song. 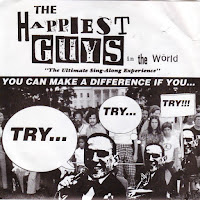 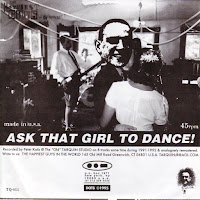 So many years ago I was thumbing through a dollar bin of cds and came across one by Philistines, jr. which had a completely non-ironic cover of "Moon River" on a console organ that tickles my fancy. (I really am a big Mancini fan. He wrote some great tunes)

The main force behind them seems to be Tarquin Katis who has a recording studio and a label and who makes happy music under various monikers with a rotating cast of characters. Including the Zambonis who play songs about hockey and who shared a single with a Harry Potter themed band for a crossover record of Harry Potter Hockey themed songs. You just can't make this stuff up.

He's also backed up comic artist James Kolchaka Superstar for a really fabulous cd with such classics as "Magic Finger". I never want to be so old and curmudgeonly that this song doesn't make me laugh.

So into this mix comes the Happiest Guys in the World with two sides of eternal optimism and encouragement. In these trying times, now more than ever this is what this country needs.

If you need visuals there's also this video for "Hey Hey, It's the Vegetable Man" that's not related to the unreleased 4th early Pink Floyd single "Vegetable Man".

Have you got it yet?

Posted by Swinging Singles Club at 8:47 PM No comments:

Part of a Tradition


The late 70's were certainly a different era... 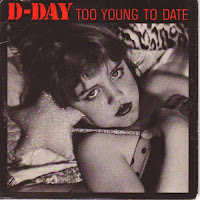 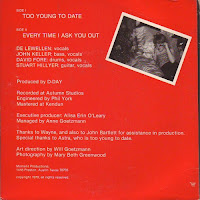 I don't know if there were people were just a lot more lax about or unaware of pedophilia back then or it was just a subject that those early punk types knew they could mine for outrage from regular folks for shits and giggles. But there certainly seems to be a lot of songs about jailbait in the Punk/New Wave canon. (ie. Better Off Dead by La Peste.*)

D-Day, who I'm sure are totally unrelated to the character D-Day in Animal House which had come out the previous year to this release, were from Austin, Texas. Must have been a total coincidence. 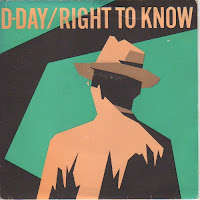 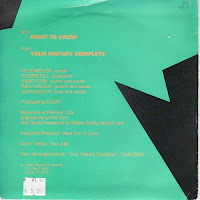 So by 1981 skinny ties were all the rage and sounds shifted towards a slightly New Wave bent and this came out. Apparently they also signed on for a single Lp on A&M. I can't imagine it sold very well. Even so there's nothing wrong with this one.
It's a perfect little time capsule. I'm sure that they shared the stage more than a few times with the Delinquents of a previous post or F-Systems.)

The mind boggles at the amount of Aquanet involved.

*Yes, I have it. And yes, I'll eventually post it.
Posted by Swinging Singles Club at 8:30 PM 1 comment:


Somewhere along the way despite my semi-meticulous organization, these future posts got slightly out of whack and things got out of order.

This particular post concludes the Half Japanese portion of our current program and sets the order of things and their accompanying post dates back to right.

We apologize for any inconvenience you perhaps might possibly have experienced if you'd actually been aware that anything had gone awry.

You didn't, but feel free to ball up a tiny impotent fist and shake it at the screen in anger anyway. 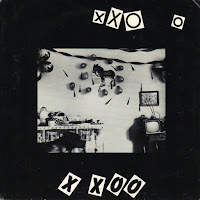 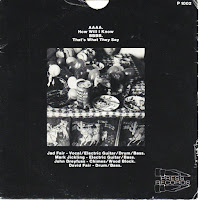 This single came out in 1982. All the people on it are in Half Japanese.
They sound just like Half Japanese. The label is one that released a number of Half Japanese records. There's covers of  both Buddy Holly and the Miracles

This band is XXOO. 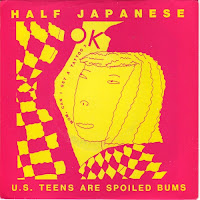 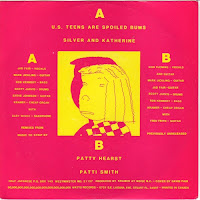 Can't argue with the sentiment.
Purchased directly from Jad himself at a show at the Uptown Bar and Grill in the late 90's. There was a break in the show when the other guitarist broke a string and he performed "Mr. Frankenstein" at my shouted request. It was a great.
Chatted briefly outside with him afterwards and thanked him for playing the song I wanted to hear. He seemed very nice.

Go to his Fun Store and buy stuff.
It's the right thing to do.
Posted by Swinging Singles Club at 7:42 PM No comments: 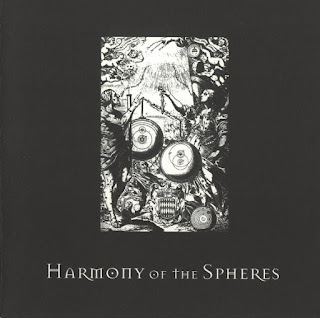 Three Lp box set on Drunken Fish with six artists doing side long tracks of spacey jams to fuel a long evening utilizing whatever substances along the way that a person who enjoys this sort of thing might otherwise utilize in situations where they are prone to spending long evenings listening to side long spacey jams.

For external use only.

Posted by Swinging Singles Club at 7:22 PM No comments:

This is a Test


I'm not sure what kind of test, but it seemed like if I typed that phrase up there as a title then in the time it took me to hit enter and start working on the body of this post I could in that half a second devise some kind of gimmick that would allow that particular title to make sense.

Perhaps that was the test.

I have failed my own test.

(But to be fair, in the midst of typing the above sentences my wife came in and asked me to smell something to tell her if I thought it was spoiled. Having potentially spoiled food thrust under ones nose with very little warning is a bit of a distraction from whatever might otherwise be occupying ones thoughts. Such trains of thought are easily derailed. Especially when accompanied by old food that smells slightly off. That has quite the opposite effect of focusing ones concentration on something completely unrelated to the unwelcome scents of questionable edibles. Of this much you can be assured.)

Now where was I? 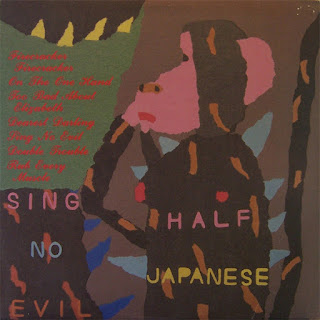 This was the last of the Lps I purchased by Half Japanese. My interests went elsewhere, but I kept these too.  I quite like them.

This one least of all because it has "Firecracker, Firecracker" on it.

The song with the immortal words:

"Boys got the muscles
Teachers got the brains
Girls got the sexy legs, they win the game
Muscles ain't strong
Brain's ain't smart
But oh, those legs, they won my heart"

Truer words have seldom been spoken.


Posted by Swinging Singles Club at 7:03 PM No comments:


I'm going to go and brush my teeth. They're feeling a bit hairy like they're wearing tiny angora sweaters or something. That's not the way for teeth to feel. That's for torsos. Who wants a mouth full of little torsos wearing furry sweaters? Not me. I'm not that person.

I'm just going to go ahead and brush my teeth right the fuck now, then. 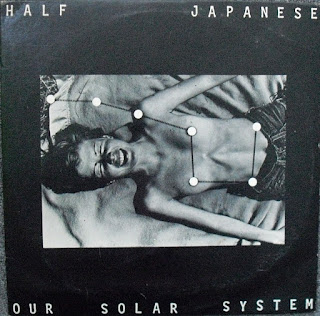 The same year that Jad Fair released the previous post Half Japanese unleashed this monster of an Lp to little or no acclaim. So many great tracks. "Danger Danger Rachel Lang", "Knocked Down on the Dance Floor", "Too Much Adrenaline" etc...

Half Japanese was really hitting a groove here.

Hard to believe that this actually existed at the same time that "Footloose" by Kenny "Dangerzone" Loggins and "Hello" by Lionel "The guy who's song is a meme" Ritchie  were Top 10 Hits.

But obviously I've run out of ideas here today. I'm recycling material and can't even be bothered to link the songs in the previous paragraph to their corresponding YouTube videos. It's probably a clear sign that I should stop for the day.
I'm obviously slacking.

The question is....Will I?
Posted by Swinging Singles Club at 6:53 PM No comments:


Where does the time go?

I suppose the universe works kind of like the final hole of a mini-golf course with time being the ball they don't want you take home and you're forever shooting it into the last cup where it is eternally sucked away forever to be recycled and the circle of life continues.

That would probably make more sense if one of us was high or something.

I'm certainly not, so I guess, it's up to you 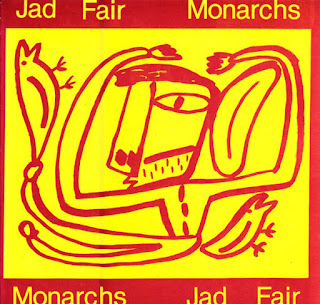 Another solo venture by Jad Fair.

If  you liked the previous one.
You'll like this one as well.
Be his friend on Facebook.
Buy some of his art.
Show the man some love.
It's all he wants for you.

Posted by Swinging Singles Club at 6:26 PM No comments: