Too Much To Choose From

At this point I've got an extra large folder of stuff to post but then lots of it is waiting for an odd or end to complete things before I make the actual post because such and such a band put out two and I've only got one of them and want to get the other first. etc..

It's not a terrible problem to have, I suppose.

It just means I have to scroll deeper into the folder to find something to post.

And here we are. 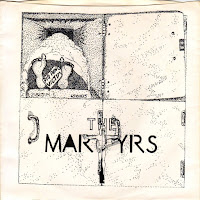 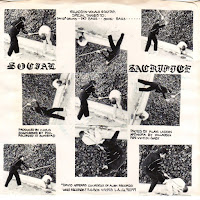 A spiffy little ditty courtesy What Records? by the Martyrs.
It's the tale of a farmer who falls into his sty and gets eaten alive by pigs.
The band includes then current member of the Germs and future Nirvana sideman Pat Smear.

B side just hits a little too close to home... 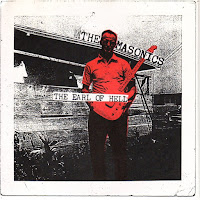 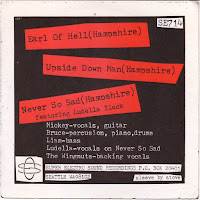 British R&B/Garage/Beat sounds from the Masonics.
Lots of crossover in sound and band members with multiple Billy Childish/Hangman Records groups.
If you like that, you'll like this.
I know I do.

A dollar well spent.
Posted by Swinging Singles Club at 3:38 AM No comments:


Another night. Another laborious task of clipping several dozen loud pops and clicks out of cheap Duke Ellington radio check bootlegs from the late 70's.

This may be a task that requires whiskey to steady the hands and quell the annoyance.

Meanwhile, you enjoy some sweet pop music set apart by a decade. 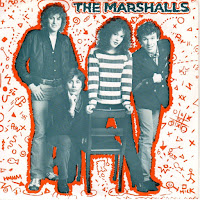 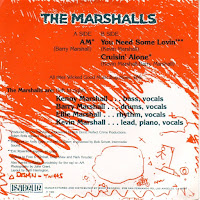 If Jonathan Richman made driving around listening to music on AM radio legit with "Roadrunner", then the Marshalls put in the final word with this bit of Bubblegum Power Pop.

It's every bit as wholesome sounding as the fresh faced youngsters gracing the sleeve.

Hold somebody's hand while you drive past the Stop n Shop. 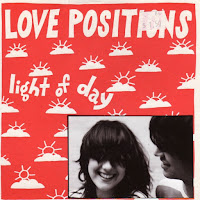 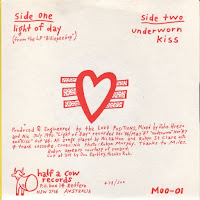 I still don't really understand why this kind of stuff isn't as valued as it deserves. It's light, and catchy and enjoyable home recordings. I mean, the most pretentious overblown depressed bullshit is the stuff that the hipsters drool over (and yes, I'm looking at you, Nick Cave), but the happy pop stuff is routinely dismissed as so much fluff when it's a lot fucking harder to write a really good catchy pop tune than your fiftieth song about stabbing a woman in the head. (still looking at you, Nick)

Love Positions were yet another home recording side project by one man Australian recording industry Nic Dalton. who while probably most famous as a former member of the Lemonheads, also helps run Half a Cow records.

This one is worth your time if for no other reason than the lovely low fidelity four track cassette styling of the Purple One's "Kiss" that is a lot more enjoyable and much less creepy than the middle aged Tom Jones collaboration with Art of Noise.

Find that hand and hold it again.
Posted by Swinging Singles Club at 1:26 AM No comments:

Son of the Return of Yet More 60s Shite

After spending way too much time clipping loud clicks and pops out of a full Lp side, I'm all out of patience, if I had much at all to begin with. 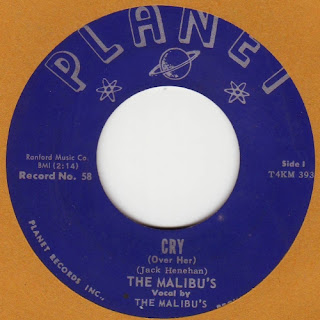 Here's a fabulous fucking big ticket item that I for some reason own and paid a pittance for many many years ago. (Super cheap because the record is actually cracked but still perfectly aligned so it doesn't make a lot of noise.)

It's by the Malibus from Cranston, Rhode Island and while the A side gets all the glory and compilation space, I do have a large soft spot for the Zombies...errr...inspired flip "Leave Me Alone" which bears absolutely no copyright infringing resemblance to the Zombies "Leave Me Be" They were just fans. 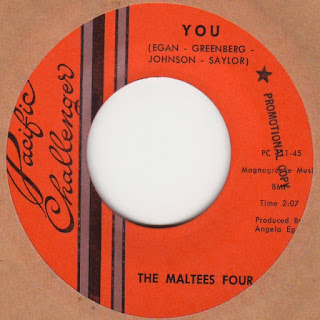 This one by the Maltees Four has been comped a few times. Here it is in its pure unfiltered form. It jangles along nicely. The only real solid thing I could find on the interwebs as to their origins is that they are alleged to hail from La Puente, California before being swallowed by the mists of obscurity.

I can only assume it's really fucking rare because it's never been sold on Discogs and Popsike doesn't even show a single listing for it. Which is really strange considering how much this kind of stuff tends to change hands among collector scum.
Who knows, I paid like seven bucks or something or it back in the 80s..

Posted by Swinging Singles Club at 4:44 AM No comments:

Return of Yet More 60s Shite

I'm digitizing some bootleg Duke Ellington air checks from 1949 while I type this.
Don't expect much on my end. 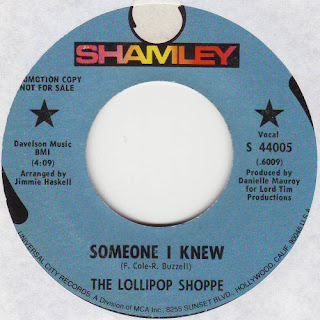 Swan song release by the Lollipop Shoppe who featured a very young Fred Cole who would be in a shit load of bands that a lot of people are quite taken with. His vocal stylings are certainly an acquired taste of which I never quite managed to get, but he touched enough people to merit a New York Times obituary, so there's that.
I'm unlikely to warrant one, so good on him. 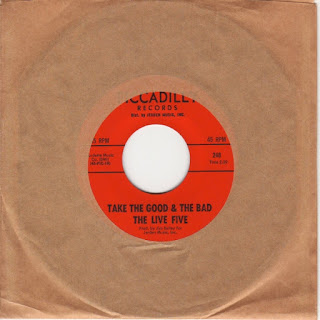 The Live Five were a fine group of young fellows who hailed from Salem, Oregon and wore some really fancy striped trousers. That's enough for me.

Posted by Swinging Singles Club at 4:10 AM No comments:

Email ThisBlogThis!Share to TwitterShare to FacebookShare to Pinterest
Labels: 1967, 1969, OR, Portland, Salem 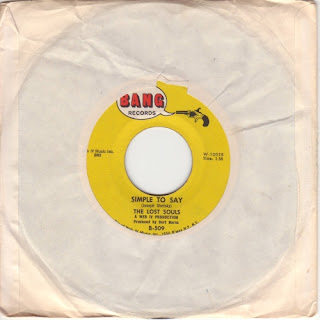 One of at least five different bands calling themselves the Lost Souls all at about the same time in different parts of the world.

Of special note is that this is NOT the Long Island band that foisted Billy Joel upon the world as a musician. This one is actually listenable.

This one was on Bang Records and as such like the Strangeloves probably didn't exist as anything but a studio creation of the producer looking to make a buck or two off unsuspecting teens. If either song had become a hit they'd have recruited some enterprising young men to impersonate the concept for a paying audience. It didn't so they didn't bother.

Too bad, the flip here "Simple to Say" is a nice garage number. 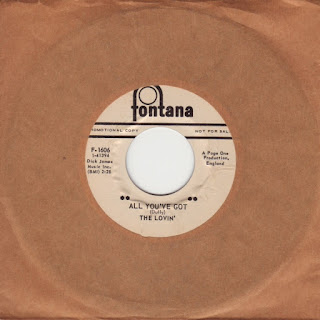 Here they're called the Lovin', but previous to that Children, after that the Nerve and finally Duffy Taylor Blues.

Here they make a nice Mod Pop racket for you and your Vespa.
Posted by Swinging Singles Club at 2:46 AM 1 comment:

I got distracted looking shit up that I lost my place. 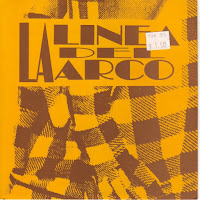 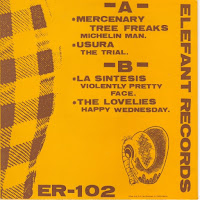 The seven inch on Elefant Records apparently accompanied the #3 edition of a fanzine of the same name. I didn't get that with my copy.
No matter. I got the important part

Two bands from England and two from Spain.
All good.

Mercenary Tree Freaks have a web presence and I found an interview too.

La Sintesis have a few things in spanish to look at and apparently had only one press photo.

The Lovelies existed and didn't leave much of a trail to follow. 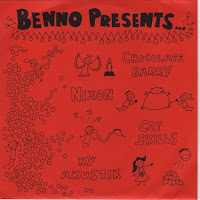 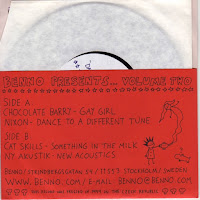 While each band and contribution has its merits and is lovely and wonderful in its own way, the reason I bought this was the brilliant cover of Jonathan King's cheesy 1970 wonder "Gay Girl"

A song so hilariously awful that it needed to be covered which Chocolate Barry does with abandon. (and spares me the duty to having to do it myself)

Yeah,  that's the stuff that gets me up in the morning ready to shuffle through crates of shitty records to find gems like this.

Posted by Swinging Singles Club at 1:56 AM No comments:


Made some nice tomato soup from scratch and have some chicken thighs stewing in the oven with thyme and all the vegetables I had on hand.

Meanwhile the chocolate marshmallow ice cream I made a few days ago is waiting and I'm planning on scooping up a nice fat, rich as fuck, pure cream, motherfucking globe of sexy coolness at some point in the near future. 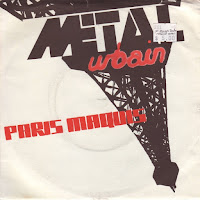 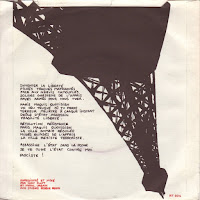 Drum machines, guitars and synthesizers mixing it up.

But I don't know, but I find the sound of angry Frenchmen kind of funny.
It just sounds sort of wrong in a punk rock context.

Is that just me?

It's probably just me.

Which isn't to say this is an unintentionally a funny record. I just have to take an extra second to appreciate it once the vocals start. (and as someone who can't speak any other languages, I really have no proper right to criticize anyone, but I did date a substitute French teacher for a while. I don't recommend it.)

It is early Rough Trade Records stuff, so you know it's essential listening.
Trust me. 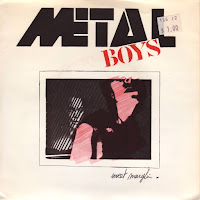 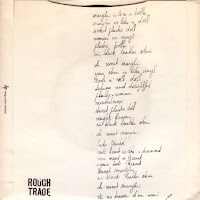 Some of the members of Metal Urbain made their own spin off band and they called themselves Metal Boys and sing in English and back it up with an instrumental track.

This too is good.
Posted by Swinging Singles Club at 1:25 AM 1 comment:


It's still early, but feels like it should be much much later.
I had a productive past few days as far as creative endeavors go so I have nothing much else up my sleeve for the evening.
So here we are... 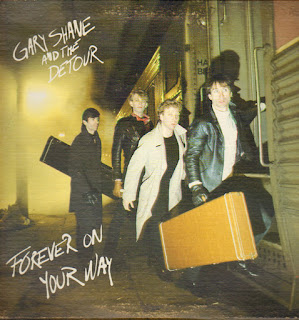 If I'd been on top of things I would have used this to follow up the Shane Champagne Band single posted some months back. I thought about it, but then promptly forgot.
I do have a rather curtailed attention span.

Here is Gary Shane and his band the Detour. He is the Shane from the aforementioned Shane Champagne Band.

This is the much more rock side of the then New Wave. It's one that on a different day could have probably secured them at least a one record deal with a larger label. They certainly got a pretty big push on local radio station WBCN at the time. But alas, nada but sweet nostalgic memories for everyone involved.

In 1982 they made it to the semi-finals of the WBCN sponsored Rock and Roll Rumble battle of the bands. Top honors would go that year to Limbo Race (on the docket) with the Hi Beams taking 2nd place.

There's even a video for the dad joke/pun for "Johnny's Coaltrain" (get it? John Coltrane and Johnny Cash's train from "Rock Island Line" which was carrying pig iron, but that's another story...)

Anyway, long story short, here is the sole Lp  release by this band.

It is what it is.

Posted by Swinging Singles Club at 10:42 PM No comments: 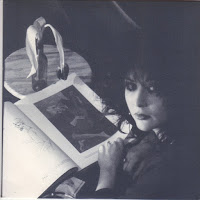 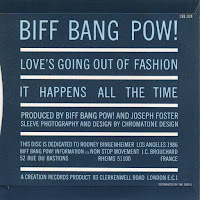 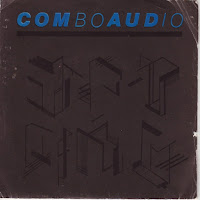 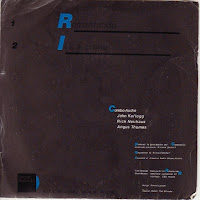 Posted by Swinging Singles Club at 12:40 AM No comments: