Hopefully this missive gets to you in time to save whatever lame New Year's Eve party you're going to tonight. 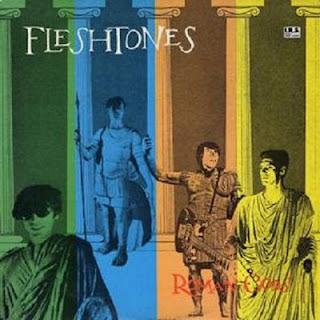 Seeing the Fleshtones lives was a guarantee that you would emerge at the end drenched in sweat from nonstop dancing and probably pretty happy and drunk at the same time. They never failed to deliver and it was always a good fucking time.

Really. There's a documentary to watch about them. It's inspiring.

Do yourself and others a favor and tear whatever lame bullshit is likely to be played and chuck this on.

Posted by Swinging Singles Club at 8:11 PM No comments:

Things Are Not What They Seem 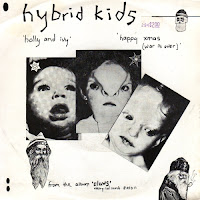 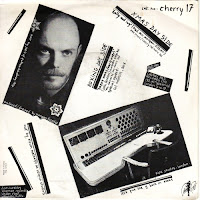 Here I got you a Christmas single by Hybrid Kids. Happy now?

So I guess, there should be a little bit of explanation about what these two are exactly.

Once upon a time there was a musician named Morgan Fisher who at one point in his career played with Mott the Hoople starting in around 1974 (here they are miming poorly in 1974. Morgan on the piano) until they called it quits in 1976.

Three years later on a cover record appears called "Hybrid Kids: A Collection of Classic Mutants" which appears to be a compilation of various strange bands doing covers of popular songs such as Punky and Porky covering the Sex Pistols in a humorous fashion.

It's all the work of Morgan Fisher.

That's him doing the vivisection of Rod Stewart here as well as a piss take on the Perry Como hit on the flip. (and it's already been established how I feel about that generic mayonnaise motherfucker of a singer.)

So there you go. We're done. Go back and spend some time with your family.


Posted by Swinging Singles Club at 7:47 PM No comments:

Email ThisBlogThis!Share to TwitterShare to FacebookShare to Pinterest
Labels: 1980, UK


I'm typing with on hand while I use the other to hold a slice of cold pizza. 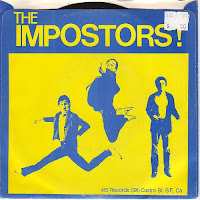 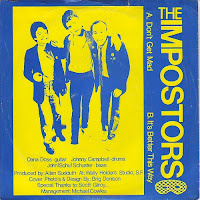 Power Pop from the Bay Area from 1980 by the Imposters.
It's good stuff. 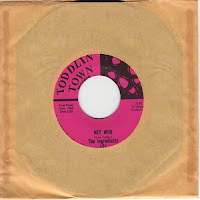 What would probably have been a Power Pop equivalent for the time by a band from the Chicago area called the Ingredients.

Also the good stuff.
Posted by Swinging Singles Club at 6:50 PM No comments:


This is the preface. It's a few sentences that's supposed to lead into the following post or at least establish my particular state of mind or just some dumb shit that I felt like typing out at the time that I was making this similarly dumb post.. It's not a reflection on you if you skim over it or even choose to ignore it entirely since it really serves no actual purpose beyond fitting a particular pattern I've previously set for the creation of posts on this silly blog and for the visual sense of helping to create a sort of frame for the artwork that follows this. 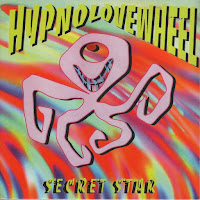 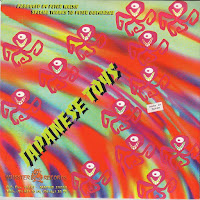 This would be the nail in the Hypnolovewheel coffin. Good songs. Terrible cover. 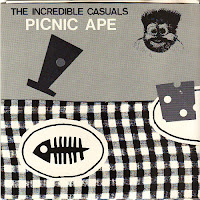 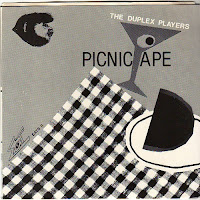 The Incredible Casuals from the vague whereabouts of Cape Cod in Massachusetts.

Now that's better graphics. No eye straining colors. A nice abstraction of a picnic with a picture of a gibbon of some sort for a song called "Picnic Ape" which itself is a short abstraction of a song.
A good balance and use of space and negative space.
I give it a B+

B-side is a dub version of the A-side which takes an abstraction and abstracts it further and uses some of the inhabitants of David Greenberger's Duplex Planet to recite the lyrics. It works on even deeper levels now.

The universe is whole again.
Posted by Swinging Singles Club at 6:10 PM No comments:

This should tide you over


I  have to go to grocery store so I have something to cook to bring for lunch at work for this week.
Content yourselves with this brief compilation until I get back. 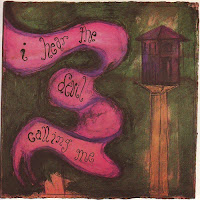 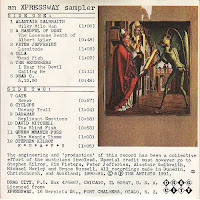 With this mere seven inches of black vinyl Drag City introduced a larger swath of the American listening audience to the lo-fi goodness that was the New Zealand label Xpressway.

Twelve songs by twelve artists. All around a minute in length.

This was a big fucking deal at the time. Still is as good a time capsule of that moment, that scene, as you're going to get at this juncture and from this distance. We ate it up. We used it as a guide to what we needed to listen to next. We followed things to their logical or sometimes not logical conclusion.

You do the same. It's good for you.


I need a snack or something. My blood sugar's getting low.

Buckle up this could be a crankier post than usual... 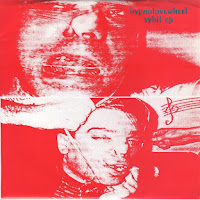 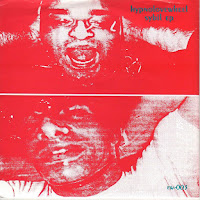 This time around they've thrown together a nice little double seven inch on 18 Wheeler which was a nice respectable little label out of somewhere in New Jersey. I've got a number of their releases.

For this release everybody in the band gets a side to themselves and does their own sort of lo-fi thing. It's actually an interesting concept and has some swell music. It's a little window into the process.

But alas, the bad decisions in terms of artwork continue....

Posted by Swinging Singles Club at 5:52 PM No comments:

The Perils of Terrible Art Direction


I don't know if today is precisely a day that will live in infamy, but it's a day.
I've got a post.
That's something at least. 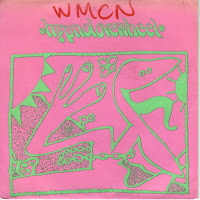 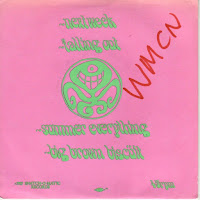 Today's lesson in graphic design is brought to you by Hypnolovewheel. A band whose bio is so nonspecific as to simply place their origin as "Long Island". They are usually described in terms of being some sort of hidden secret cult indie pop band. I read it on more than one page looking stuff up. But I also think that to a certain extent there's some snake eating its own tail to what little there is about them on the interwebs.

They released records for at the very least a half a dozen years including five full length Lps and a handful of singles on various labels including the Alias Records which was a pretty big deal for an indie label back in the day. But they never quite took off. I mean, I like them. They were a good enough band. What went wrong?

A quick glance at the eye bleeding cover for their first single here should be a clue.
Follow that up with a look at their next single... 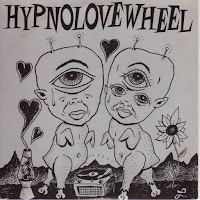 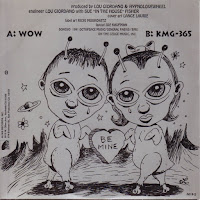 Wow, indeed. I mean, if you weren't a complete nutcase like me, would you even take a second glance at a record with that kind of terrible artwork?
It goes way beyond the terrible "My girlfriend is an artist and she drew a cover" kind of bad cover art that we've seen on here before and into the "somebody with a modicum of actual talent conceived and drew this stuff and the band and label looked at it and thought, "Yeah, this will really sell this record"  (the artist for this one is Lance Laurie and he does some really cool stuff and did do some other good record covers too. This one however...)

It's some good indie pop, but I'd be hard pressed to grab either of these out of the bin without having listened to it first. Unfortunately for them it's a trend that followed them throughout their brief existence...

There's even a video for this particular single that's kind of interesting.

Posted by Swinging Singles Club at 5:22 PM No comments:

Just Because and Quick About It


I got nothing.
I wanted to get this on the docket before I did actual, you know, constructive things with my sad wasted life. I've previously posted at various times I don't have the energy to look up the two singles by Grow-Up that preceded and followed this Lp. Now here's that Lp. It's fucking great and don't let anybody tell you different. They are liars and terrible human beings who should be ashamed of themselves.

Short, crafted and eccentric and very, very English diy indie pop songs with horns. This is the shit.

I found my copy recently at a record store in the outer burbs that I hadn't been to previously. It was sealed and at a decent price. I also kind of horrified the record clerk when he found out that I fully intended to go home and open a record that had remained sealed for 40 years like some kind of sacred tomb. But what's the point of buying a record if you can't listen to it?

I'm certainly pleased to have opened it and hopefully you'll share my enthusiasm.
This is a great fucking record and I wish I'd had a copy years ago so I could so I could have had more time to enjoy it over the space of years.

Posted by Swinging Singles Club at 9:00 AM No comments: