Because I can and it's my blog and I'll cry if I want to. 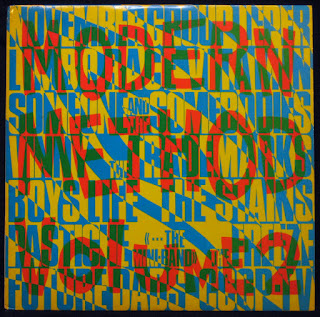 When last we convened we had the first venerable lp of a small percentage of Boston's alternative music scene to consider. It was followed up a while later with this second volume of more of the same. Somebody still thought Boy's Life and Someone and the Somebodies were worth recording but balanced it out with the Freeze and the first appearance of cold wave dance music by November Group. In some ways this one is both more and less successful than the previous volume, but I find less chaff overall. They didn't make another one.

Posted by Swinging Singles Club at 6:47 PM No comments:

After a marathon session slaving over a hot turntable and a pair of laptops I'm ready for a fresh round of homemade postings with oodles of sarcastic gravy. Loosen your belt, and strap on your feedbag.

Compilation Lps. Can't live with 'em. Can't do without 'em. Always a mixed bag. But the good ones balance out the duff tracks with stuff of such wonder you tend to forget that you wasted four minutes of your life on some terrible crap waiting for the good stuff to happen again. 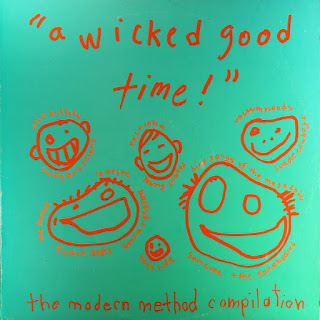 In the heady days before Newbury Comics was the beloved Boston institution that it has become it was a scrappy little hole in the wall on Newbury st that had a selection of otherwise hard to find punk and new wave records in the front and comic books in the back. Either of  which, if you'd been a more savvy consumer at the time could be worth a small fortune now. I wasn't, but I did buy records from a young Aimee Mann. I have that going for me.

So here Newbury Comics teamed up with WBCN (in those heady pre-Clear Channel days when radio stations could play stuff not chosen by middle managers) to put out a compilation of local alternative bands (from when "alternative" meant an actual alternative to mainstream AOR rather than a marketing term used by mainstream AOR to sell you other shitty music).

This was the result.

It's not perfect. It does have some chaff and an inexplicable double dose of Bound & Gagged, but I defy you  not to come away from a listen without humming "Psycho Blonde" at some point in your day.  Other highlights are the Outlets good and fast punk rocking, the Vacuumheads snarky "Preppie Girls" which my friend Jim and I thought was hilarious in high school. And the recorded debut of Young Snakes featuring the previously mentioned Aimee Mann being all angular and new wavey. (The actual ep they'd release a bit later is fucking genius). All in all a solid compilation of a small fraction of what was actually going on in town. Omissions galore but they were starting a record label an had an agenda. I'm ok with it.
Posted by Swinging Singles Club at 6:08 PM 2 comments:

A bit of an orphan

I was doing up a few 12" records and did this one. It's worth posting and is the last thing left in the pile to be posted. I've got a whole other pile of crap I'm working on finishing up and I've added a new hard drive to my old laptop which I'm going to see about making my dedicated music machine. With that in mind, I'm just going to throw this out there and let it fly.

Slip a tab under your tongue and let it wash over you. 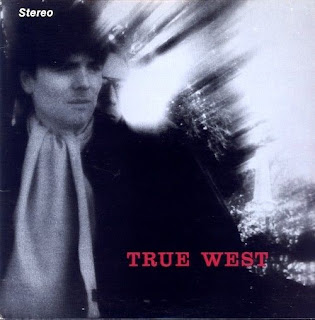 Posted by Swinging Singles Club at 6:36 PM No comments:

A couple from a misspent young adulthood in the Bay State. 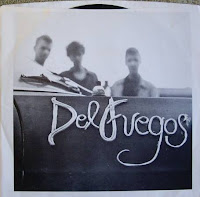 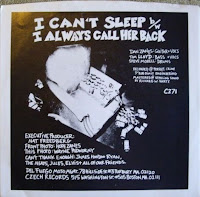 There was a point in the early part of the 80's when if you were in Boston and pulled up a random rock you might find the Del Fuegos playing under it. I didn't actually ever go out specifically to see them, but ended up seeing them quite frequently anyway playing with other bands I intended to see, They were doing well for a while too. Got signed to a major label, had a minor hit and managed to make it all the way to appearing in a beer commercial which I'm still not sure they've ever quite lived down.
This primitive slice is their debut single. You can almost smell the bathroom at the Rat in it. 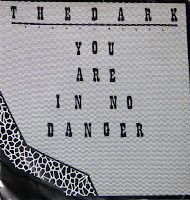 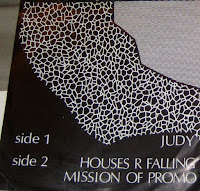 Side one of this features a song called "Judy" the song is about a stalker level obsession with Judy Grunwald who at the time was in a band called the Maps (whose single "I'm Talking to You" is referenced in the intro and which I'll get around to posting probably a couple years from now.) She was also formed the band Salem 66 after leaving the Maps (who continued on as Art Yard who recorded but didn't get to release what would have been a monumental single on Propeller Records)  "Judy" however was a minor local hit for the Dark in Boston and I listened to it a shit ton in high school without ever actually seeing the band play live.
The line "I'm really glad you dumped your boyfriend/He looks like an East German Border Guard" is alone enough to make it a classic for anybody except conceivably Judy's ex-boyfriend.
All that being said there are also two other songs on the seven inch. You can interpret that how you wish.

Posted by Swinging Singles Club at 5:59 PM No comments:

Because I can and it's my blog and I can cry if I want to. 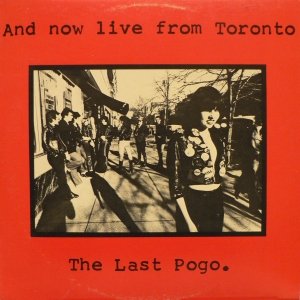 A live compilation of Toronto bands done as the last hurrah for the closing of the first "punk" club in town. Once again. Hits and misses, A reggae band and a mod band that apes the Jam. Your mileage will vary, but I quite like the Cardboard Brains.

Posted by Swinging Singles Club at 5:52 PM No comments:

The nail on this particular coffin, unless I get to digging and come up with more. Discogs lists a few things, but they're not burning a hole in my brain at the moment. 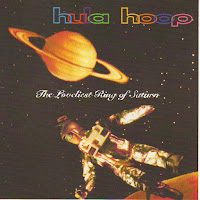 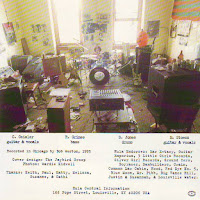 This was one of those pleasant surprises you occasionally got back in time long before sites like Discogs existed when you could occasionally be thumbing through a bin at a store and find something you didn't know existed. Such was it with this second full length. 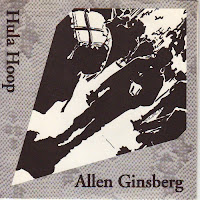 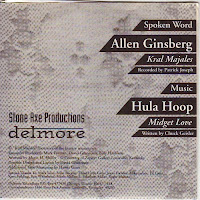 It's not every day you get to share recorded groove space with a Beat Poet
Posted by Swinging Singles Club at 10:33 AM 1 comment:

Haven't done a compilation lp in a while 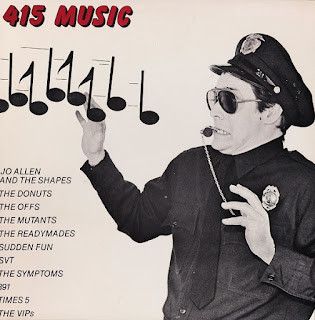 This one is is from San Francisco. It's 1980. It definitely leans more towards the pop side as opposed to the punk side of things. I'm generally Ok with that. It's a compilation so it has its good songs and a few clunkers which I'll leave up to you to personally decide is which. This used to be a very common record that cluttered up Compilation bins at record stores for many years. It's less common now since I assume that nobody ever bought it. I finally caved in not too long ago and I'm kind of glad I did.
This record solved a mystery I wasn't even aware was a mystery in need of solving. There's millions of little bits of music that are eternally stuck in my memory waiting to spring forth at inopportune moments which seem to come from nowhere such that I wonder sometimes if it actually exists in reality or only my sweaty back brain. Every once in a while somebody would mention the word "radioactive" and a tiny part of my brain would throb with a loop of a part of a long forgotten song I probably heard twice a long long time ago. "Is your radio active?..." would repeat a bit and then move on to something even less important. Playing this record solved that enigma. The song in question is by the Times 5. I feel better already.
Other reasons that this may be of interest to anybody besides myself are the appearance of Sudden Fun who otherwise released a rather sought after seven inch that I wish I had and the initial release of the Offs "Everyone's a Bigot" which was more popularly known and released on another compilation on Subterranean Records called "Let Them Eat Jellybeans" which was essential to every record collection's cool factor at the onset of the 80's. I also like the Mutants.

Posted by Swinging Singles Club at 5:10 PM No comments:

There's someplace I kind of ought to be. I'm not there. I'm here doing this. For better or worse. And today's post is more housekeeping than anything important. I've got one more Delta 5 single that needs to go up and I'm going to pair it with the first Com-Sat Angels seven inch because they seem like they go together well enough to make the post somewhat more coherent than I am. 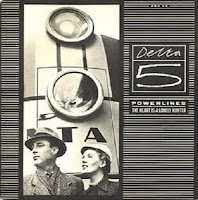 Probably and arguably not their finest effort, but listenable and the capper on their career and the extent of their recorded works that I currently own. I'm not actively seeking out more, but should I come across it at a reasonable price, I might pick it up if the urge strikes me. 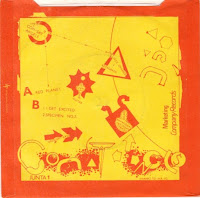 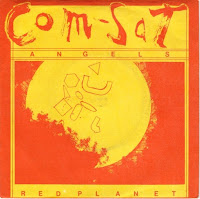 The first single by Sheffield's Com-Sat Angels (or CS Angels as they would eventually be known as). This single got them a three record major label deal to the mildest of successes and years of frustration. Such is the life. No matter. I rather like this about as much as I really don't like their later stabs at more commercial AOR music that they hoped would make them rich or at least allow them to lead comfortable middle class existences without having to hold down a regular job. I wonder what they're doing now? Well, not really. I've got this single to remember the glory days with. And that's enough for me.

Posted by Swinging Singles Club at 4:32 PM No comments: