I Relented and Reordered All my Shit


Because you really can't have enough singing saw and banjo in your life... 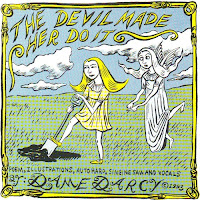 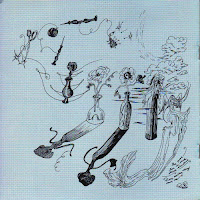 Yeah, 1994. Dame Darcy was the It Girl for the year that had all the record store clerks in a tizzy.

Here are the other two examples of her oeuvre in the realm of seven inch vinyl for this banner year. 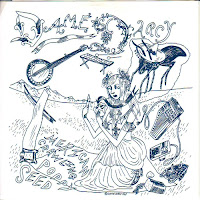 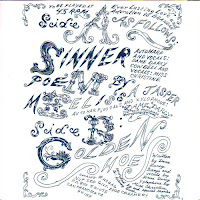 It made sense then and it makes maybe even less sense today.

Catch the zeitgeist of the early 90's and ride the wave of low fidelity into the heart of whatever trip this takes you on. Bring a friend though. I wouldn't recommend it on your own.
Posted by Swinging Singles Club at 3:29 AM No comments:

So here's another incidence where I thought I'd already posted some Coctails and the other two Dame Darcy singles I've got and was looking back so I could link to the previous posts and bring some closure to the world, only to discover I hadn't done anything of the sort. 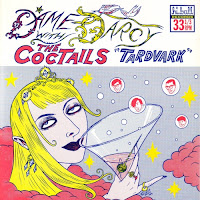 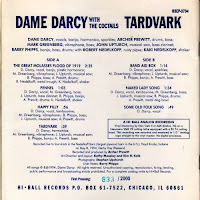 It's Dame Darcy. It's the Coctails

The songs were recorded in a barn or something in a single day. Your enjoyment may vary depending on your tolerance level for singing saws and weirdness. I'm Ok with it personally.

( Now I have to figure out if I really need to cram those other singles into the queue...)

Because the other thing I had for this was this 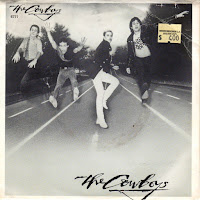 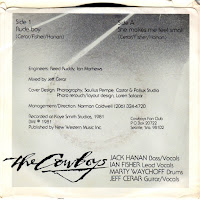 So "Rude Boy" is that faux ska that one might expect. But the flip "She Makes Me Feel Small" is the power pop song you should pay closer attention to. It's not going to change your world, but it's better than getting a pencil lead jammed into your forehead. Trust me.
Posted by Swinging Singles Club at 3:02 AM No comments:


So I remember seeing this a whole lot when I first moved out here. 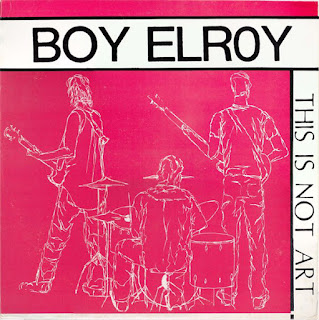 Let's face it the cover is terrible. The band name is pretty terrible too.

Consider the back cover too. I mean, that attempted mustache alone....

That's not Art Direction so much as self sabotage. 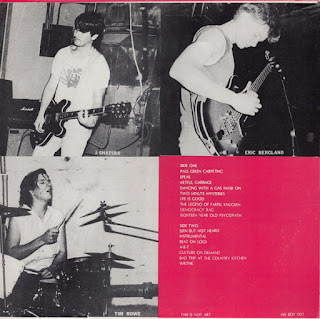 However the actual record itself is great. No really. It is.

I'm not even kidding.
Posted by Swinging Singles Club at 2:30 AM No comments:

See you on the Flipside 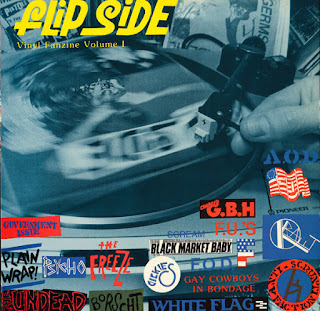 Email ThisBlogThis!Share to TwitterShare to FacebookShare to Pinterest
Labels: 1984, compilations

So now it's a number of months since the previous post.

All of which is meaningless to you, dear reader, because time doesn't exist for you in the same way on the intertubes. There are no gaps. There is only now and a continuous stream of the eternal Now-ness of this rambling piss stream of forgotten music.

Meanwhile, I'm beginning afresh with a newly minted stack of things penciled in to slide out uncontrollably like so many half squelched farts in a crowded elevator. They're currently set to silently but deadly the blogosphere until the end of next February.

Or at least will as soon as I type this shit out which will take for-fucking-ever if I keep babbling.

Let us begin in earnest: 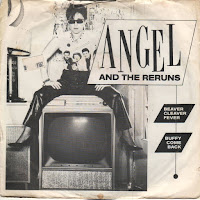 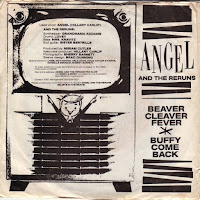 Yeah, a couple of Nu-Wave musical tributes to those ancient TV shows that played in endless syndication during one's formative years as a young child. (Well, for me perhaps. I'm old as fuck.)
Bring on the camp of Angel and the Reruns

One side about Leave It To Beaver about as white bread a sitcom as the 50's ever churned out and the other side a sad tribute to the late Anissa Jones former clean cut child star of the innocuous Family Affair sitcom. It was a sad tale.

But if you're Angel and the Reruns, you can certainly count yourself as a music biz success if you managed to get one of your songs onto the soundtrack of a Tom Hanks movie.

Even if it's the one where his costars are Tawny Kitaen, best known for writhing on a car hood in that Whitesnake video and Adrian Zmed, best known for his starring roles in TJ Hooker with William Shatner and his unforgettable turn in the internationally acclaimed "Grease 2".

It was still a fucking Tom Hanks movie, dammit. 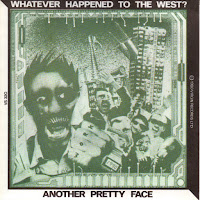 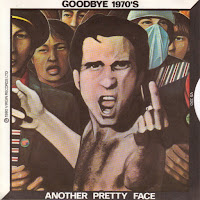 Another Pretty Face. Another fucking single. Here's the second one to go with the one I posted like two years ago. You're welcome.


Posted by Swinging Singles Club at 1:21 AM 2 comments:

I've been working on posts all fucking day.

I lost count. It's over a dozen anyway

I've been trying hard to finish up this batch of stuff so I can start digitizing new stuff because I kind of would rather be listening to music than typing about it.
But one drives the other and at this pace I'm rapidly closing in on a point where I'm queuing up posts a full year in advance of when they will appear.
That's kind of scary and daunting. 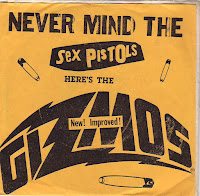 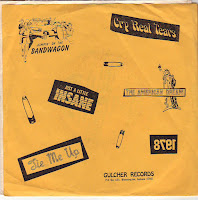 It's the Gizmos 2.0. from Bloomington, IN.
The Dale Lawrence version.
This is the revamped incarnation's first record on Gulcher.
I like it. 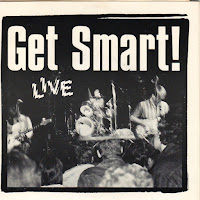 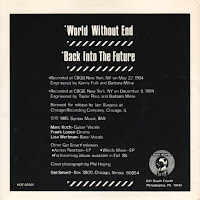 (You can check Kansas off your fifty states scorecard now)

This is Get Smart! live at CBGB's.

Email ThisBlogThis!Share to TwitterShare to FacebookShare to Pinterest
Labels: 1978, 1984, Bloomington, IN, KS, Lawrence 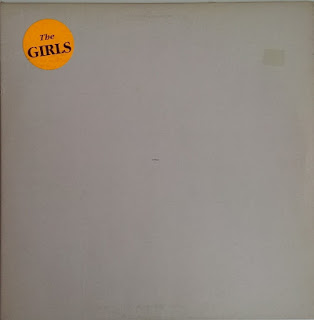 From Boston. They existed from 1976 to around 1980. By reports of a guy who knew them and I was in a band with in the mid-80's, by the end of their run they all hated one another and were wont to have frequent fights onstage. But that same mutual loathing fueled some really amazing live performances.

However in 1986 and for many years after this little compilation was all there was to go on besides the previously posted single. It was called "Reunion" and consists of a bunch of previously recorded numbers from when the band actually existed. They were like that.

As it stands. It's definitely damaged arty synth punk shit or whatever micro genre you want to pigeonhole it into. It's tough. It can take it.

Your mom will hate it.
Your college roommate would probably hate it. (unless he likes it, then you probably hate it.)
You might hate it too, but can't stop eating it like a big bowl of candy corn that's sitting in front of you.

Listen to it anyway.
While it's still legal to do so.