This is a continuation.
I'm halfway through ripping those cds I mentioned in the previous post.
I'm also still listening to the previous Lp and stalling before I switch to this one for while I type out this current post. It helps. 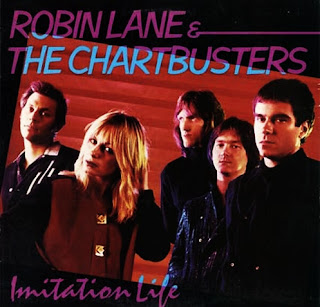 
Yeah, here is the follow up by Robin Lane & the Chartbusters.

It's called "Imitation Life"
Seems like Warner Brothers gave them one more chance.

It's another strong effort. Does not fall prey to the dreaded sophomore slump.

I'd be hard pressed to consider which track ought to have been the single. Warner Bros. went with "Solid Rock" though I might have gone with "Imitation Life" or even "Pretty Mala"  since it's a nice upbeat pop song on what's actually a slightly darker album overall. As I remember it, local radio station WBCN played "Send Me an Angel" a bunch at the time long before Clear Channel came along and ruined radio for everybody.

Another dollar record and this one without even a compact disc reissue.

They lasted on Warner Brothers for one more Live Ep (which I don't have. I used to have it in my Discogs wantlist, but I'd get inundated by so many copies in the daily email that I had to take it out)

Well, I like it and I'm enjoying listening to it.
You do the same.

Posted by Swinging Singles Club at 10:34 PM No comments:


I got a nice bundle of NOS compact discs from Sunday Records this afternoon that I'm ripping while I type this. It's going to be a good night. 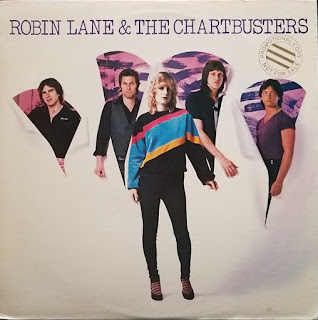 I won't pretend I understand the ins and outs of the music business. If I probably wouldn't be doing this stuff. I'd be off on my private island banging supermodels before wandering into my state of the art home studio and shitting out another mega-hit. Or at the very least I wouldn't have to work a regular job.

So here we have the debut record on major label by Robin Lane & the Chartbusters. It's a really fucking great pop record. It has "When Things Go Wrong" on it and that song is one of those that I usually have to play a few extra times whenever it comes on.

It should have been a huge fucking hit.

I dare to you to google up the top 100 hits of 1980 and tell me that Rupert Holmes and Christoper Cross made better records than this. I mean, Olivia Newton John had the #3 song. I call bullshit.

Plus half of the Chartbusters were in the mid-70s incarnation of Jonathan Richman & the Modern Lovers. That's a pedigree.

So needless to say, but said anyway, I really really like this record. I couldn't explain to you why, but I do. It actually saddens me a bit that you can find copies for a dollar. (Though for some reason, people are asking crazy money for a 2002 reissue on compact disc). It's consistently good all the way through.

I think you should too.
Posted by Swinging Singles Club at 10:07 PM 1 comment:

Middle of the Road


I don't know.
But here it is anyway. 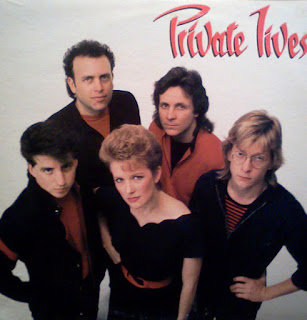 AOR New Wave from Texas by a band with really nice hair.

(Except for maybe that guy in the back with the receding hairline, but he writes the songs, so suck it)

"When the World Comes Crashing Through" really ought to/could have been a radio hit.

(That said, I certainly enjoy this more than some of their contemporary peers like the Motels or Missing Persons.)

But there you go.

Fate is fickle.
Posted by Swinging Singles Club at 11:32 PM No comments:

Email ThisBlogThis!Share to TwitterShare to FacebookShare to Pinterest
Labels: 1983, Round Rock, TX

Some Things Exist as Themselves


I really need to eat something, but I'm digging listening to these two first. 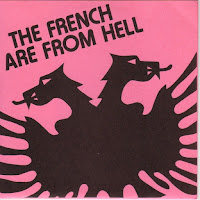 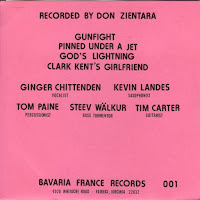 Very little is to be found on the interwebs about this band. I had a link at one time that can't be bothered to find right now. In the end it doesn't really matter.

What does matter is how fucking good this seven inch is.

I mean, every once in a while I buy something blind. Simply based on random factors like date or one familiar name on an otherwise obscure sleeve. This was recorded by Don Zientara who recorded basically everything in and around Washington DC worth listening to.

The music nerds might say this is some sort of post-punk nonsense with saxophone or something silly like that.

I just say this one is Gold.

"Pinned Under a Jet" is arguably the hit, but damn, I wish there was an lp hiding somewhere or a few stray compilation tracks, but sadly no...

I just want some more. 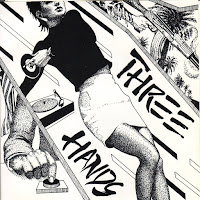 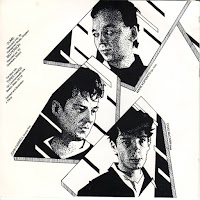 Chorus pedal abusing New Wave trio from Boston with at least one member being an Irish expat which explains why some further releases by the band were on an Irish label.

It's still the good stuff.

At least for me, I guess. It has a certain nostalgic appeal that brings back a time and a place and sense memories of the parking lot of the Channel right on Boston harbor where I'm pretty sure I probably saw them at least once for some all ages show. I should have kept a show diary...

Yet Another Vintage Regional Compilation 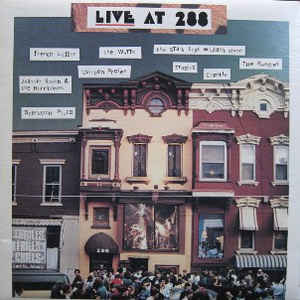 Nine tracks by nine bands recorded live at a place called the 288 Club in Albany, NY.

This one is another keeper. Only a few of these bands released anything else in their lifetimes and it covers a nice gamut of New Wave to Pop to Synths and Punk with a stray Rockabilly track thrown in for good measure. All of whom would have disappeared without a trace but for records like this one. (Certainly the Tragics and Capitle should have been comped on some punk rock exploitation record a long ass time ago, but they haven't to the best of my knowledge.)

And really all are pretty damn good and I would certainly have enjoyed this as much then as I do now and even now it's hard for me to pick a highlight.

Plus no ska or faux Jam mod bands.

Posted by Swinging Singles Club at 10:17 PM No comments:


I have a nice warm cat purring contentedly in my lap.
Feels good, man... 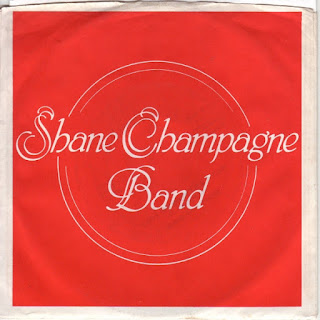 Shane Champagne Band. The A-side is a nice power pop number of the sort that the world was knee deep in at the time. Really ought to have been comped multiple times over, but there you go.

B-side "Love my Baby Like a Car" is a step or two closer to what might be termed "punk" but in the way that Television and Blondie get lumped into the popular thought process as "punk" as opposed to Black Flag. Still very pop, but different.

I like both sides. You make it famous and valuable. 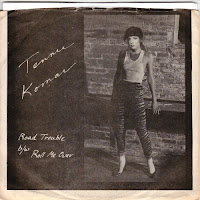 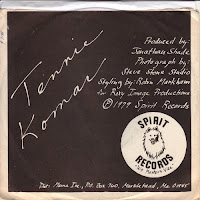 At the same time that Gary Shane and David Champagne were tearing it up with the above Ms. Tennie Komar put out this single. I have a love/hate thing with it.

First off, it's terrible.
Secondly though, it's terrible in a very hilarious way. (Well, at least the B-side is) Both being songs penned by one Jon Goldman.

It gets labelled on Discogs as"New Wave/Punk" which I personally find as a bit of stretch based more than likely on the sleeve than the music. Certainly tight tiger print pants and heels might seem pretty Nu Wave, but the music is pretty suburban rock. Don't be fooled.

I'm back in town to show you something new
Been in the city for a year or two
I'd like to make up for the time we lost
C'mon Sugar, be the Boss

Roll Me Over x2
Roll me over, lay me down and do it again...

You'll have to excuse me.

It's just kind of dusty in here...

Posted by Swinging Singles Club at 9:46 PM No comments:

Another that has been sitting around


So this one's been sitting in the "to post" folder only a day less than the previous one.
We're back from Costco and a couple hundred dollars lighter, but won't have to leave the house for a while now. We're restocked and good to go. 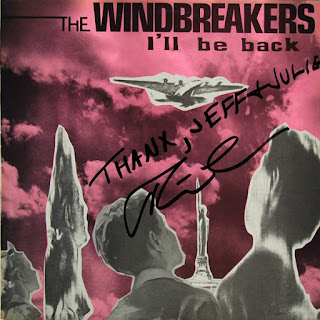 
Mississippi. Cross it off your list. Here's the Windbreakers.

The electric sitar in the first track seals the deal for me. The Daily Collegian out of Penn State still has a contemporary review that quite enjoyed them too.

Perhaps you will as well.

I have their first single too. It's like half a dozen or so singles boxes away from seeing the light of day. If I live long enough and I continue with this nonsense, I'll post it.

Posted by Swinging Singles Club at 9:56 PM No comments:

Getting Ready for a Costco Run


So it's a day off and I actually got up early so that I'd be awake during normal business hours and could run some errands. It's one of the things you have to do when you work nights. You either stay up late or get up early to do normal people shit.
Thank (insert deity of choice) for stores open 24 hours and living in the city. 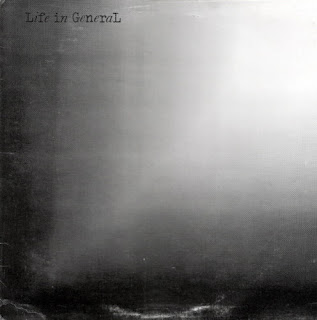 A quick google comes up with a few interesting things about this otherwise obscure 12".

The band started off as one called X-15 who had a song called "Vaporized" on the local compilation "Seattle Syndrome" in 1981. At some point they changed the name to Life in General.


It's been sitting in the SSC to post folder since December 21, 2017 mostly because I was kind of thinking I'd get to L in the alphabet a lot faster than that. But today seems like as good a day as any since we're long past even vaguely trying to keep up with alphabets and such and that folder is rapidly getting larger and larger so I should do something to clear it out a bit.


I probably haven't even listened to it completely since then either
I like it.


I'm also pretty sure that in the meantime from "Vaporized" until this was recorded they likely had heard a couple of Bauhaus records which is most obvious in "Respite Lost" where the singer tries his best to channel him some Peter Murphy.

That's not a value judgement. Merely an observation.

Posted by Swinging Singles Club at 5:48 PM No comments: