I have mixed feelings about the Caroline Know.
I kind of  like them some days.  Less so others.
Today is more or less one of the former. 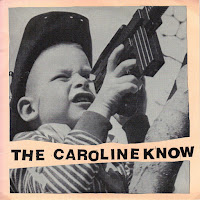 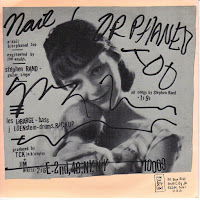 Both of these seven inches were on the Bus Stop Label which generally catered pretty well to my aesthetics for most of the 90's. So I picked up the first one and sort of liked it and snagged the other later on for the sake of keeping up with the Bus Stop discography. About all I know is that they're from Western Massachusetts.

You can google more if you're really curious. 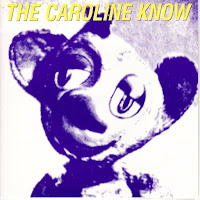 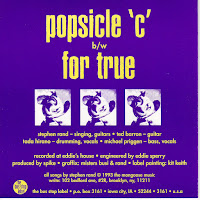 Since I'm going to digitize all the Bus Stop singles I have eventually, I may as well just share them as I do  them. Like I said. I have mixed feelings about these two but a deep sense of a need for completeness.

It's indie pop. You know the drill. Sometimes it takes time for things to grow on you. Sometimes longer than others.

Posted by Swinging Singles Club at 8:20 PM No comments:

I'm slowly catching up today with stuff that's been sitting around in a folder for a while waiting for a chance to be posted. 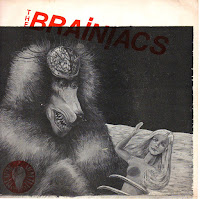 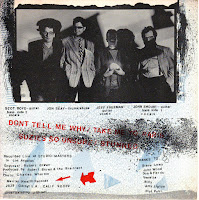 The label for this LA band is based in Gilroy California. The garlic capital of the world and home to the famous Gilroy Garlic Festival. You already missed it for this year. I think that "Don't Tell Me Why" was comped somewhere on one of those silly and bottomless punk rock compilations. Certainly deserving. The rest of the ep seems to follow more or less the law of diminishing returns, but it's nothing that's going to keep me from listening to the whole thing. Is the world clamoring for a reunion and deluxe reissues? No. But don't let that you stop you from giving it a spin in the old digital entertainment device. 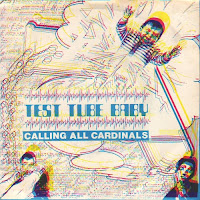 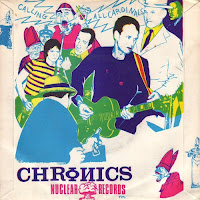 1978 and In Vitro fertilization was new and exciting. So were the Chronics. This is their sole contribution to recorded music that has been available. I like both sides.
There must have been something the water in Ohio.


Posted by Swinging Singles Club at 8:03 PM No comments: 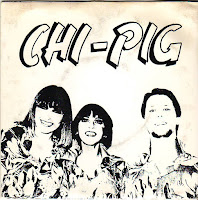 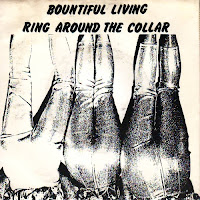 Chi-Pig were from Akron, Ohio. Akron had a really great and very strange music scene in the late 70's that's never really gotten the credit it deserves. Pere Ubu and Devo get the hipster namechecks but there was a lot of really good and really strange shit bubbling under the surface that nobody knew about at the time. If this had been released in NYC or London, somebody'd be waxing rhapsodic about it. It wasn't. They don't. I like it a lot. It's got that something about it. It's got that certain joy in making music for the sake of having fun vibe about it. They seem like very nice folks too.

If you're really ambitious and want to spend money Soul Jazz put out decent compilation of Akron stuff recently that's as good an introduction as you're likely to find until I get around to digitizing all the Clone Records that I've got. (Including a pile NOS things I dug up in Chicago last month.) Buy that first and salivate a bit to build up your appetite. 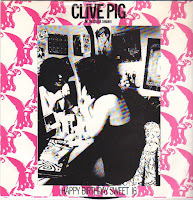 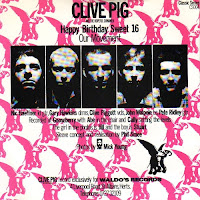 Clive Pig is apparently a children's entertainer now. Good for him.

The A-side of this is a fucking brilliant ode to the various trials, tribulations and awkward frustrations being a teenager without any of the sentimental bullshit. Because they may end up being the best years of your life, but that generally just goes to show how fucking dismal the rest of your existence gets.

It's got a toe tapping beat too.
Posted by Swinging Singles Club at 11:12 AM No comments:

It's Been a Month 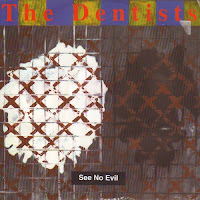 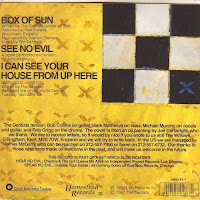 I got kind of a bum copy of this one so the little "See No Evil" poem didn't play. It was cheap and I'll upgrade at some point. Until then enjoy what you get. It's not like you shelled out any cash for it. It's on Homestead. 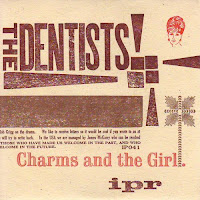 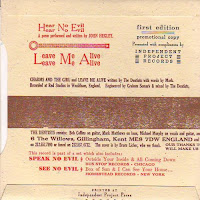 Another Independent Projects Record in a fine hand letter pressed sleeve. It sure is pretty special. Also  "Charms and the Girl" is likely my favorite song from this later period of Dentistry. 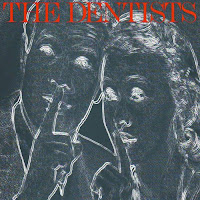 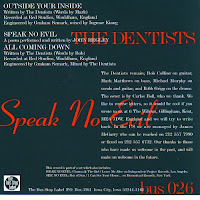 This one's on Bus Stop. "Outside Your Inside" is a bit of an earworm. You've been warned.

Posted by Swinging Singles Club at 10:46 AM No comments:

Not the Cat's Pajamas, the other thing.

Here's the other two singles I have.

There are two more and a number of split 7 inches to yet find, but I'm not really actively looking right now. I guess, I'm just not feeling wistful enough. Perhaps as Fall wends its way into Winter.... 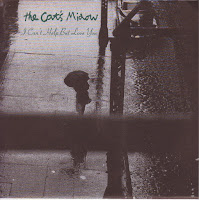 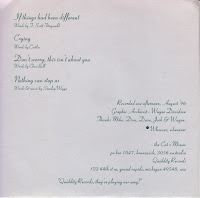 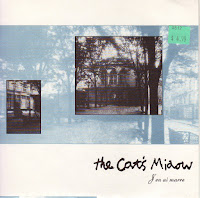 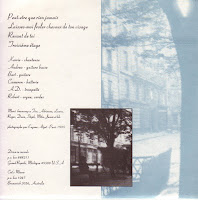 This second one is sung entirely in French. I don't know French, so for all I know all the songs could be about saucy hand puppets and pledging their undying love to anthropomorphic bricks of moldy cheese they've named Jamie. I may never know. I might actually like it even more if it were.


Posted by Swinging Singles Club at 10:34 AM No comments:

Email ThisBlogThis!Share to TwitterShare to FacebookShare to Pinterest
Labels: 1996, 1997, Australia

I was such a sucker for this back in the day. 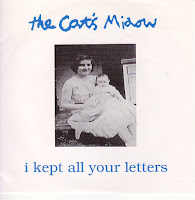 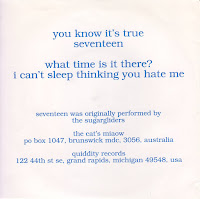 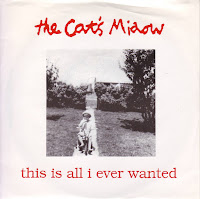 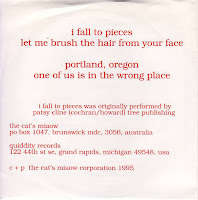 They have a website. It's really awful and doesn't appear to have been touched since the turn of the century. But it's got a discography. So that's nice.


Posted by Swinging Singles Club at 10:21 AM No comments:

Email ThisBlogThis!Share to TwitterShare to FacebookShare to Pinterest
Labels: 1995, Australia

I may need to step this up

I  don't know. I go on jags where I do up a shit ton of records. Get them all set and then spend a month or so not even looking at the turntable. Then there are times where I've got insane amount of postable crap and I set it the queue for months in advance at a not overly tight schedule of at least once a week.

There sometimes just doesn't seem to be enough time to post all the junk I feel like posting. I get so far ahead of myself, I'm already setting up shit for next year. I may have to  start posting stuff at a faster rate to fit it all in a timely fashion to where my head is at.


Not that any of this matters to you. You just want new things at a constant rate. 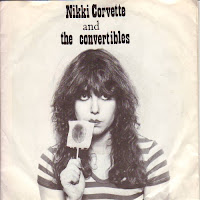 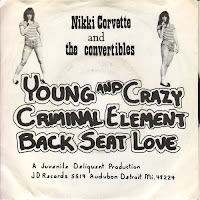 From Detroit. Kind of what you expect it to sound like. I'm not saying it's a bad thing. 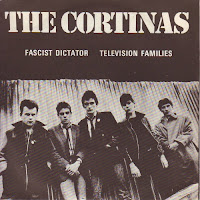 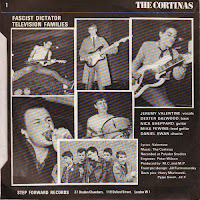 From the label that gave us the early singles by the Fall. Looks like some high school age shenanigans. Sounds about right. One of the kids plays guitar in an overcoat and tie. Make of that what you will. It looks like it could be uncomfortable to me. But fashion has its price...

Posted by Swinging Singles Club at 11:58 PM No comments: