Let's Top Off the Month


Quickly. I got shit to do. 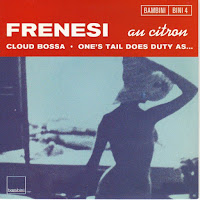 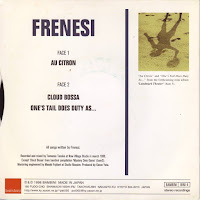 Here it is the very thing you never actually knew your life had been missing for so long.

It's like something straight out of the Katamari video game soundtrack. (Which is pretty fucking awesome in itself. I seriously bought a four disc version of that soundtrack and I'm the person who normally mutes the music as the first thing I do when setting up to play a new game...) 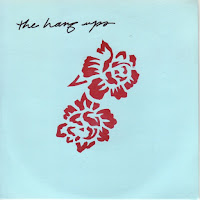 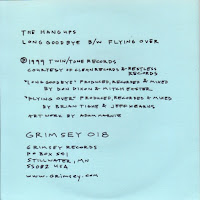 Here's the final single by the Hang-Ups since I got it and I needed something else to post today and I've already posted everything else I had by them last year sometime. (Do a search. I'm not your Google.) It's more of the same and will have to tide us all over until they record new material.

Which may actually happen. For an anniversary deal last year they played an in-store at the Electric Fetus with more new songs than I wanted to hear at the time. So perhaps they will reappear in another form in the near future.
Posted by Swinging Singles Club at 7:15 PM No comments:


More from the batch of extra cheap batch of indiepop seven inches I picked up last year.
I bought them blind. Having no idea what or who they were, but they were ridiculously cheap and based on the rest of what the seller had on offer seemed to be of a piece. So I plunked down my hard earned and waited to discover what I had gotten myself into... 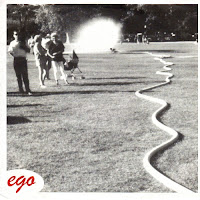 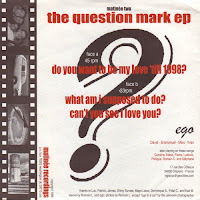 Ego is a pretty terrible name for such a sweet twee little indiepop band. It sounds more like the name of a loud boring alt-rock outfit that might play one of the outlying stages of a large outdoor festival to thirty people while a further thousand mill about paying too much for bottles of water.

Not really a good way to stand out from the crowd.

I chose it because it was on Matinée Recording. I have some other stuff on the label, so I  kind of had an idea of what I was in for already, but without that I don't think I'd have paused on this release flipping through a bin at a record store. But such is the power of offering me records for ninety nine cents... 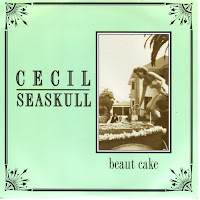 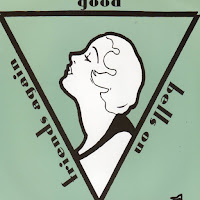 Now there's a name. Going to forever be the only one of those on Discogs. It's catchy and the sort of name that makes me wonder what that sounds like.


The insert uploaded above gives the particulars of this release. I don't feel like rehashing anything that's already right in front of your lazy eyes already, so go head and click on that and squint a bit.
I'm hungry and we're supposed to go out for some hamburgers tonight.

Cecil Seaskull/Nerdy Girl also released a full length the following year which I don't have.
Yet, anyway. 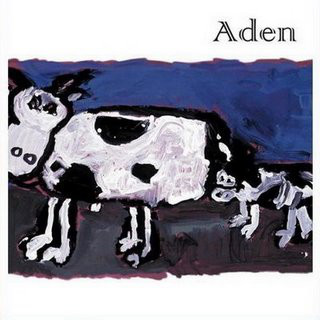 Those guys in the previous post who had formed a band and called it Dingle and then changed the name to Aden recorded and entire compact disc of material and set it loose on the world with a cover painting of two cows.

Who doesn't love cows? Or at least a good hamburger. Or cold glass of milk.

And really it was only an almost complete compact disc of material. There are a handful of songs that were on the previous two releases. Only this time in glorious digital fidelity.

Mid-90s vinyl can be pretty noisy and cheap sometimes.

This full length release brought them to the attention of Teen-Beat records which would go on to release a further three full length compact discs of Aden that I don't have, so this story doesn't really have much of an ending. Only a soundtrack. And a nice melancholy indiepop one at that. So....


Posted by Swinging Singles Club at 6:26 PM No comments:

Time flies even when you're not even having any fun.

Remember that and think of it sometime when you're about to fall asleep. 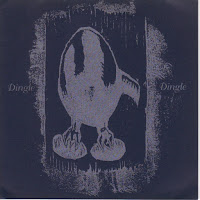 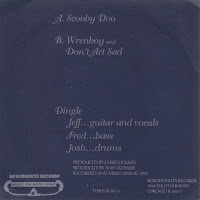 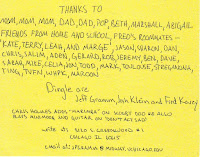 
So once upon a time there were three college kids in Chicago, Illinois who formed a band. They called this band Dingle.

Dingle was a good band. They played live and after a little while they went and recorded a little seven inch ep and named it after themselves. It had three little songs simply recorded and released it into the world for everyone to see. And nobody paid that much attention. 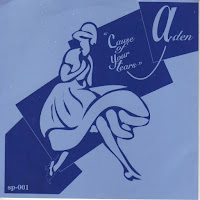 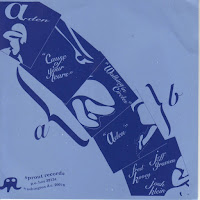 So our three stalwart and steady heroes made a bold decision. They changed the name of their band to Aden. That they decided was a much better name and one that was bound to grab them more attention and put them at the very front of the alphabet where people might see them. And then they waited.

And while they sat behind the hedge waiting they recorded another seven inch with three more songs on it this time. One of the songs on it was named "Aden" which they liked enough to name themselves after. It was a good bit of vinyl and they knew it.

And then they waited some more for people to notice.

A Dearth of Vowels 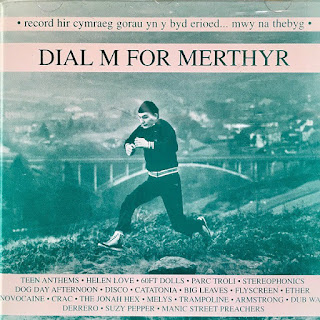 It's a double Lp compilation of Welsh bands from 1997.
I feel like that should speak for itself.

Posted by Swinging Singles Club at 3:21 AM No comments:


It's hard to come up with words to describe music while listening to other music.
I'm not so good at that kind of multitasking shit.

It gets even harder when you have to get up every five or so minutes to flip over the single that you're digitizing on the other laptop and you're listening to the record and typing.

As young Sarah Lynn was wont to say:

That's too much, man! 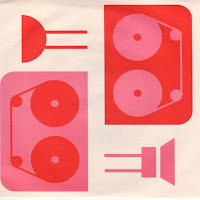 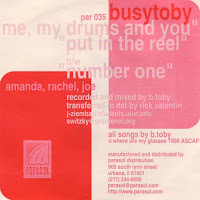 
According to something else I read, Busytoby is an side band featuring members of Champaign, IL's own Wolfie which may or may not make it more enticing a listen to some.

I'm not swung either way. I listen to this entirely on its own merits. 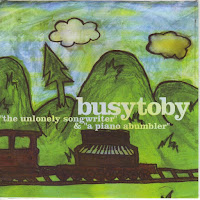 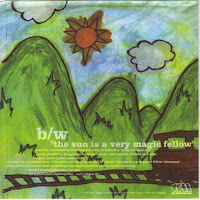 
The other one on 100 Guitar Mania Records has a cover of Donovan's "The Sun is a Very Magic Fellow" on the b-side.

They had me at a Donovan cover.
Posted by Swinging Singles Club at 2:41 AM 2 comments:

I'm having another record night with some of the things I picked up on a recent jaunt to Seattle, WA. To be honest I spent way more money on records than I really planned or wanted to, but we were only there for a few days, so it was buy it or regret it.

I can mostly afford the records, but I don't have time for the regret.
Middle age is like that.

One fun thing was flipping through the $1 cd bins downtown. Cds are apparently very out of favor these days and some things just don't sell anymore, if they ever did in any capacity to begin with. 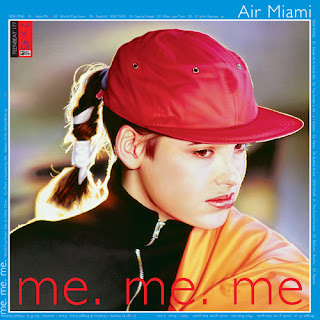 So yeah, I picked this OOP gem by Air Miami up for a single US dollar. I count this as a complete win. I may be wrong, but know I'm not, that the Washington DC band Unrest deserve another look and posthumous critical reappraisal for their recorded output. They covered a lot of ground in their brief existence leading into Mark Robinson's record label Teenbeat. (which also needs to be looked at again in hindsight)

From the ashes of Unrest, Robinson and Bridget Cross formed the even briefer existing outfit Air Miami which picked up where Unrest left off and a bit further.
It's lovely.

The tl:dr of which is that this their third and final full length is fucking wonderful.

There I said it.

I can't be bothered to look up and link them, but I know there are a couple of singles also posted sometime last year.

Posted by Swinging Singles Club at 1:57 AM 2 comments:

It's Been a Little While


Pop. It's presumably Spring here in the Northern Hemisphere when this pops out of the queue and onto your screen. A time of rebirth and green and warm breezes.
That usually calls for pop music in my world. 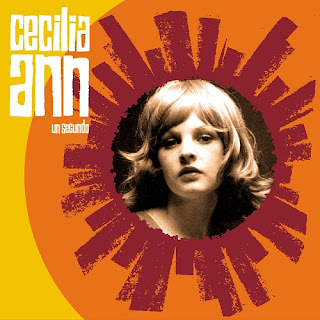 Not long ago, as of this typing anyway, I bought a bunch of 90's pop stuff off of Discogs for really really cheap. Like $0.25 for a record cheap. I got a lot of stuff from this guy in two different orders of indie pop stuff from the end of the last century.

This is one of the things I took a gamble on. I couldn't really lose, you know. If I liked it, I win because it was ridiculously cheap. If it sucked. I spent next to nil on it.

Cecilia Ann are/were (?) a Spanish band on Elefant Records who presumably named themselves after the Pixies cover of a song originally by the Surftones. (I make this assumption this based on the fact that Cecilia Ann's sound owes a lot more to the Pixies than to American Surf music.)

It doesn't matter anyway. "Tengo Sueño" is a good tune. They sing in Spanish. And I like this record.


Posted by Swinging Singles Club at 7:37 PM No comments: