1996. An odd year. I know where I was living and presumably which crappy job I was working and a few other vague things that may or may not have occurred then, if not in the year or two after that. All in all, not a particularly memorable year in and of itself. I existed. I hated my job and life and it was I think, before I started mistakenly dating somebody I should have otherwise avoided like a neurotic plague. Hindsight.

At least it's sunny and mid-summer when I imagine that year and my old cat is still alive and sleeping on the end of my futon on the floor. Perhaps on an old t-shirt I took off before a shower.

Meanwhile, Boyracer continued to pump out vinyl at a steady Mark E. Smith like pace. 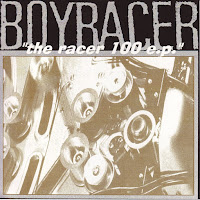 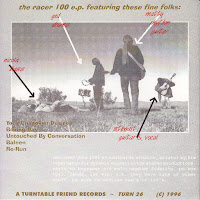 The Racer 100 ep was released to celebrate the 100th Boyracer song. An occasion so momentous that it required its release twice in both a seven inch (Turntable Friend) and twelve inch (Blackbean and Placenta) format on two different labels.

It also doesn't hurt that it's probably one of my all time favorite singles in existence. Countless tapes for women included "Yr Unspoken Desires." and to this day  the tiny presumably accidental feedback squeal just before the guitar break gets me. It's one of those perfect little musical moments that make listening exciting.

I've also never been able to decide which format sounds better or which version I like better. There's more songs on the 12", but the 7" is more nicely pressed and packaged. The B&P version is a stamped construction paper sleeve on really thin single sided vinyl. But.... 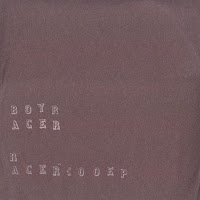 The extended version has few more songs on it to enjoy. It was originally pressed in an edition of 600. One thing to note is the song "Bee to Honey" is a cover of a Tall Dwarfs tune that appeared on their "3 ep's" feature length. It's a pretty good version.

If you're a really good person and not some sponging parasitic bottom feeder you would take the time and click on over to Jen & Stew's site and buy their digital version. It no doubt will sound better than my straight from  vinyl versions, but also includes the "Live at Stache's" lp that I won't be bothered to upload for god knows how long. Weeks? Years? It's only five bucks. Skip a lunch. 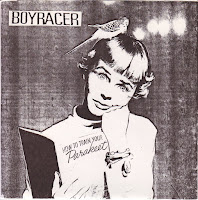 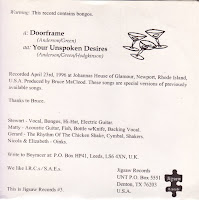 The final bit of Boyracer '96 is this oddity released on Jigsaw apparently recorded in Rhode Island on tour. They're acoustic versions of songs recorded elsewhere that seem to have been recorded under the influence of some combination of alcohol, sleep deprivation and giddy glee that comes from the two former while on tour. Not perhaps the most essential versions but moderately amusing. I mean, "Your Unspoken Desires" would be plenty all right and quite lovely if it weren't for the inclusion of somebody making pig noises rhythmically along with the song at various points. Kind of really pulls you out of the moment.

Also the bongo warning is not a lie. Apply with caution.
Posted by Swinging Singles Club at 9:56 PM No comments:


1996 was rather a busy year for our Boyracer heroes. Lots of things on a number of labels. Here's a few more with very little talking. 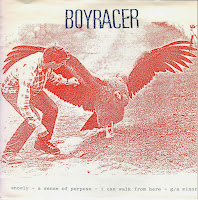 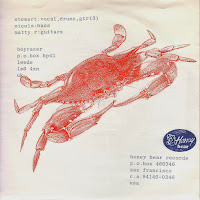 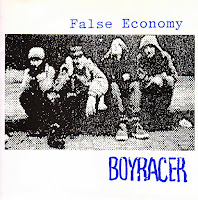 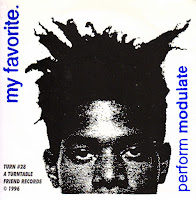 (for the record. My Favorite weren't) 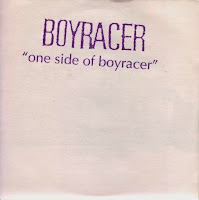 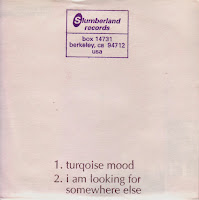 The sleeve is a recycled Ropers sleeve folded inside out with a hand stamp. Good way to keep costs down. As is one assumes not having to pay somebody to master two sides of a seven inch, though that seems more like an under utilization of available resources.

Posted by Swinging Singles Club at 12:29 AM No comments:


While I'm thinking about it I'll slip this in. There's a couple of Boyracer tracks here that appeared nowhere else as well as a whole fucking shit load off great indie pop songs that you should have a listen to. 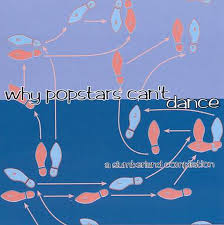 I ended up kind of using this as a guide for a lot of contemporary purchases and it was an introduction to a bunch of bands that I ended up listening to a lot at the time and a jumping off place to the genre in general. A whole bunch of which is likely to find there way here as I continue on with this silly waste of time and energy. But everybody needs a pointless hobby to while away the time and keep them too busy to realize they are inevitably and inexorably slipping ever closer to the grave with every passing second. It's something to do.

Posted by Swinging Singles Club at 10:59 PM No comments:

Enough already with the Boyracer shit. 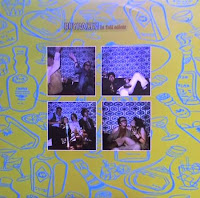 Third full length. Released during a brief stint on an MCA subsidiary called Zero Hour. This was likely my second exposure to Boyracer after a couple of tracks on the Slumberland "Why Popstars Can't Dance" compilation. (Which I realize I'm going to have to add to this mess since neither of those tracks appeared elsewhere. Plus it's a pretty ace compilation overall.)
I seem to remember picking this up super cheap on a whim because I recognized the name. It was a good buy.
Posted by Swinging Singles Club at 11:54 PM No comments:

I'm hungry. I still fear eating, though. (it's still the same flood the queue night as the previous month) I don't feel like saying clever things anymore due to low blood sugar. But I did pop some more ibuprofen and take a nice hot shower so that helps. 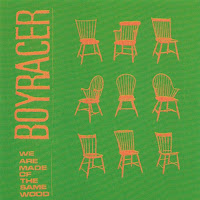 
The rip here is from the Cd version that I think I picked up cheap a long time ago but if you were a savvy consumer back in 1995 you might have purchased the 10" colored vinyl version from Turntable Friend so that you could also have the  bonus flexi featuring their rendition of "Electricity" by Orchestral Manoevures in the Dark which as I recall the story was originally intended for the record but left off when it was discovered how much OMD's publishing wanted for the privilege. A work around was found when it was subsequently learned that this fee could be bypassed if the recording was a "Promo". So for the vinyl version a bonus Promo flexi was included with "Electricity". It's also included here because I'm like that.
Posted by Swinging Singles Club at 11:36 PM 1 comment:

Given the horrible toothache I'm currently having as I load up the post queue here a month or two in advance by banging out a bunch of posts all at once so I can let things fester along without me while I tend to other pressing matters like more whiskey and typing out really long under punctuated run-on sentences and because I've already done up half a dozen Boyracer posts and already had this stuff on the back burner for after since my brain had moved on in the meantime and it seems kind of apropos and it's really good and what I've actually been listening to a lot in the last month anyway and just seems more or less kind of kismet I'm going to break up the current Boyracer deluge by tossing a good overview of the discography of the Dentists into the mix. It's late into Spring and as good a time as any for some jangly Pop.

Where it all began: 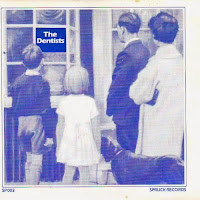 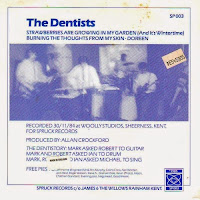 Strawberries are Growing in my Garden (and it's Wintertime) (1984)

This is one of those fabulous debuts that are part of the reason I really like singles so much. The A-side s as damn near a perfect bit of jangly paisley infused pop as has ever been committed to vinyl. It's like sonic Pez. All sugary goodness you want to crunch between your teeth. Have to listen to it again. Want more. The flip is more of the same with the song "Doreen" existing nowhere else in the Dentists discography. Rinse repeat and  rinse again. 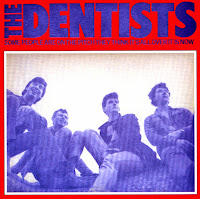 So here's the deal. Be Me. It's 1985. Be in Nuggets Used Records in Kenmore Square in Boston. See this lp. It's, I think $7.99 for an import. The young lads on the cover look like people I'd consider hanging out with. The title is unnecessarily long and there's a song on it with the word "psychedelic" in the title. Know absolutely nothing about them or have the slightest clue what it might sound like. Feeling adventurous with my limited disposable income. Just go ahead and buy the fucker. Get home. Put it on. Made the right choice.

I'm not really sure why nobody seemed to pick up on this when it came out. In hindsight it should have been big or at least be one of those "obscure" records that people reference in their influences that "people in the know" will get. But it wasn't. It isn't. And outside of various readers of the BOB magazine nobody really noticed it in the year that Wham! and Madonna battled it out at the top of the charts. Dark times indeed.

The good news for you is that you can have your very own brand new copies to do with as you please that will probably sound better than these slapdash mp3's I make for my own amusement. The good and tasteful folks at Trouble In Mind records have reissued both of these for the discerning to have and to hold and admire. I suggest that you ought to be one of them. It's always good to have a hard copy back up of such tremendous wonderful.

Posted by Swinging Singles Club at 8:52 PM No comments: