So, the main hard drive where I had stored my digital files shit the bed.

But on the bright side, since I believe strongly in redundancy the back up was fine and only a couple of months out of date. But since I had all my recent files elsewhere it ended up being not so painful a process as you might expect. Recent rips were on my phone and all the vinyl .wavs are on a different drive. So it ended up being a matter of re-ripping four records that I didn't have otherwise somewhere else and retagging a previous rip of a Cd I got in the last couple of weeks.

So let this be a timely reminder.

Back your shit up, motherfucker!
The files you save may be your own.... 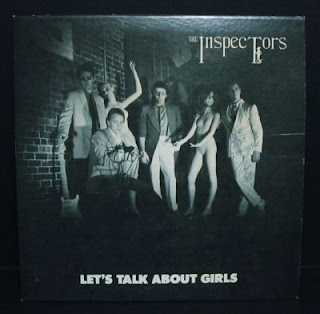 1.) The Title made me wonder if they were doing a cover of the Grodes song made more famous by the Chocolate Watchband. (It's not, but I didn't know that until after I bought it.) It's actually an original song.

I'll admit that #3 was really what sealed the deal.  How could I resist?


They were apparently from Sioux Falls, South Dakota. Not much info on the internet. Not much needed. It's some pleasant AOR New Wave with some nice old school synth action that probably got them laid now and again so long as the women didn't pay close attention to that song about a serial killing rapist...

According to Popsike.com some poor schmuck shelled out $200 for a copy in 2011. But in 2016 someone else got a bargain at $20. The copies on Discogs currently start at $60 but the median sold price is $35 so who knows what this may or may not be worth. I paid considerably less than any of that so I win, I guess.

You get to hear it for nothing. So in the end we're all better off.

Posted by Swinging Singles Club at 3:29 AM No comments:

Endless Summer in the Middle of Non-stop Winter

(Hold on a sec. I clicked stop on this single too soon. Have to do the whole side over again. Mult-tasking is harder than they make it seem on TV) 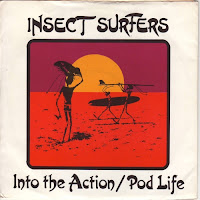 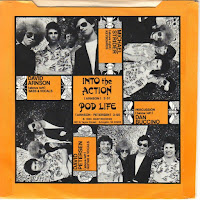 Back again with the Insect Surfers.
All you goofy feet wax up your boards and put on a skinny tie because it's time to get totally tubular.
Two groovy sides.

Nothing but blue skies and cool water. 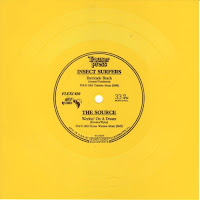 A few years later there must have been some kind of feature in Trouser Press because there appeared this little flexi split with label mates on the Insect Surfers label Wasp Records and fellow DC band, the Source.

The Insect Surfers looked like this when they played their song:

Presumably the Source looked different but who can be sure anymore?
It was a very long time ago..

Posted by Swinging Singles Club at 12:13 AM No comments:


The cat has had her dinner. The wife is sleeping or at least trying to. It's late at night and I got a large package of new things in the mail today very cheaply and while I type up these posts I'm simultaneously digitizing some of them on the other computer.

I'm also restocked on beer and made chicken adobo for the first time yesterday.

It should be a good night. 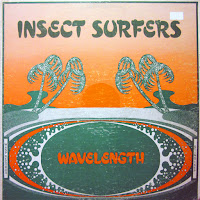 When I was a lad, I used to spend many a summer vacation hanging out at my grandparent's house in Washington DC. At some point in and around my middle teens I must have heard this on the local college radio play some tracks from this Insect Surfers ep.. "I'm in Gear" is an earworm of deceitful type proportions. And in those heady long lost days I purchased a copy of my very own.

Somewhere in the intervening years I sold it. I began regretting that decision. But there we are. I regret quite a few records I sold. But as luck would have it, I did eventually find another cheap copy to call my very own. It's this one.

It answers the burning question of what happens if you cross an American New Wave band with a Surf band. The results more or less speak for themselves. Quite positively.
As an added "bonus" there's a very odd stab at Wire's "Ex-Lion Tamer" to round out the process.
It is by no means the highlight of this set.
Posted by Swinging Singles Club at 12:04 AM No comments:

The Exclamation Point is Important

If you're interested in the history of the exclamation point read this. 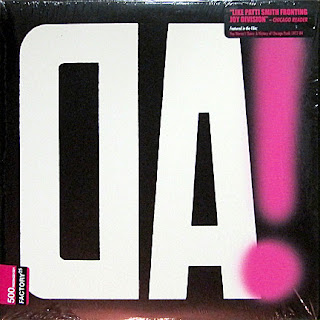 
A limited Record Store Day dealio of unreleased and live and various tracks from the band Chicago band DA! as previously posted and even discussed in the last post. (See that for relevant links and shit.)

Lorna Donley died in 2011 of a ruptured aorta, but not before they had a brief reunion in 2010. Here's a contemporary interview from then.

David Thomas, the guitarist not the Wendy's founder, has a Soundcloud page up with some more unreleased stuff and rehearsal tapes that you can enjoy. There's a live version of the Byrds "Why" from the 7th St Entry in 1983 that is quite good.

Posted by Swinging Singles Club at 4:59 PM No comments:


It's early in the morning hours.
Download this at a volume that won't disturb others. 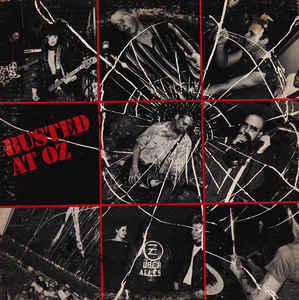 
Another quality compilation of Chicago heavy hitters from 1981 on Autumn Records. The Silver Abuse tracks are my particular favorites because they are unremittingly dumb and funny and all the more punk rock for it. This is also recommended for the live DA! track who didn't really fit in with the whole punk rock at Oz scene, but they were already on Autumn Records with a single and an Ep (Which you may remember got posted a few years back)  so they made the cut.

AV Club has an article about a reissue done a number of years back.

Posted by Swinging Singles Club at 7:09 AM No comments:

The Real New Wave is Real


I have leftover Indian food, but I'm unfortunately out of beer.

It's always the little things.

Life is a constant struggle. 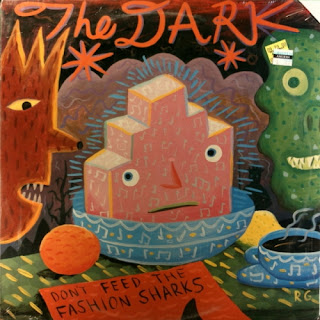 Here we are. It's 1983 and the Dark have made the big jump to the major label subsidiary Relativity Records for what would ultimately be their swansong. It's another groovalicious New Wave joint full of the same blend of goofiness and danceability that defined the previous record.

That being said. It's not my favorite. It's very mired in the sounds and production of 1983 and sounds almost quaint and a bit thin for my liking some 35 years later. I don't actively dislike it, but it's not something that I'm going to seek out on a regular basis.

Your mileage will vary. I'm probably just going to play "Judy" from the first single again.

Posted by Swinging Singles Club at 8:21 PM No comments:


The Winter Solstice was on December 21, so in theory it's starting to get light again in the world, but I work nights so all I see is darkness. I live in a half light and under lamps and overheads and florescents. It's just how it is. 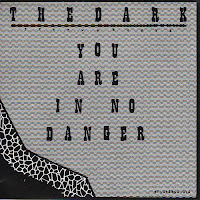 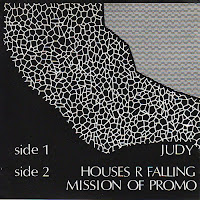 
This post involves the Boston area band popularly known as the Dark.

There is at least one thing we need to get out of the way right off the top.

This song by the Maps. The Maps were led by one Judy Grunwald who would eventually go onto Salem 66. This is important because this is the Judy of the song that kicks off this seven inch ep and this is the song that gets referenced in the intro.

Well mostly. Even before I was aware of any of that stuff I was still mildly obsessed with the song as a teenager for quite a while. It's a corker. I mean, the lines "I'm really glad you dumped your boyfriend/He looks like an East German Border guard" are just fucking brill.

The other two songs don't quite rise up to the level of "Judy" but they don't need to.
They just need to fill out the other side.
Which they do that quite adequately. 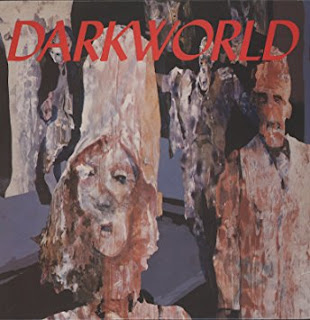 The Dark expand on their New Wave Dance groove for a six song, not quite Lp. It's all very early 80's in sound and feel and depending on how you feel about that your mileage will vary as to your enjoyment. I'm a bit on the fence myself. There's a lot to enjoy and a lot that is very dated and doesn't translate as well into the 21st Century as other contemporary things. But "We Can Be Children" is a nice tune and there's a follow up to the previous single with "Judy II" which leaves one wondering if Ms. Grunwald ever sought a restraining order.
Posted by Swinging Singles Club at 7:49 PM No comments:

Yeah, hopefully you had a good time last night. You may in fact be a tad hungover today.
Perhaps it's all a blur.

Or maybe you went to bed early and today is just another fucking day.

Any way you slice it this post is for you.

Start 2019 off with something good for a change. 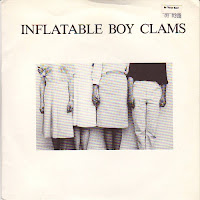 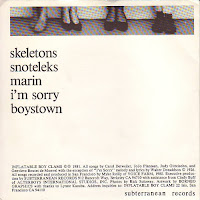 
Here it is, kids. their sole release ever. A double seven inch so good they didn't need to record anything ever again.

Dangerous Minds has a little history for those who want it.

I don't. I have my own history with this masterpiece and its mystery that any additional knowledge could only taint. It is as it exists to me. I intend to keep it that way. (except that two members had previously been in the band Pink Section whom I also quite enjoy but in a different way.)

Posted by Swinging Singles Club at 8:32 PM No comments: