It's Christmas. I hate Christmas music. I'm not even particularly a fan of the holiday. I'm probably working it again this year. I don't celebrate and I like Holiday pay. Everybody wins.

That said, this is what I'm going to do for you this day. I'm going to make not one, but two punches in your Fifty States of music with a pair of singles from the magical state of Hawaii.

Hawaii, you say. But that's that tropical place filled with fat guys playing Judy Garland songs on ukuleles and lots and lots of fucking lame reggae. I won't argue that point with you. My wife is from Hawaii. I have a number of ukuleles as well. It's pretty mellow, brah.

It like everywhere else had its own weird music scene which produced these two little wonders.

No ukuleles in either. 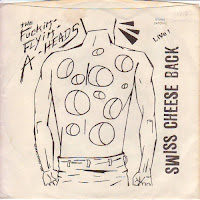 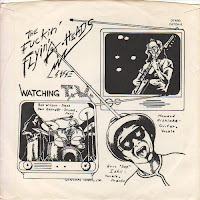 I really don't know what to make of this one. It's loud. There's a metric ton of fuzz and distortion and noise. But at the same time there's a manic glee to it that suggests that they weren't really trying to be "punk" rock as much as mocking it but by the same token making something much more actually punk rock than they intended. Howard Nishioka is the guitar player here. He's also known for making an lp of psychedelic weirdness in 1979 called "Street Songs" that is somewhere on the radar of shit that people are going to start namechecking at some point. There's more than a little bit of psychedelic noodling that occurs in this but it's buried under so much distortion that you really can't tell what the fuck is going on except that it's fucking brilliant. 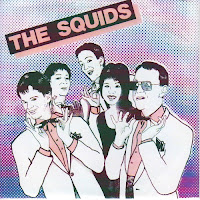 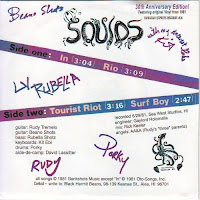 This is NOS vinyl in a new sleeve. Apparently one of the band members had a number of leftover records after the initial run (with silk screened sleeves). They made new sleeves for them and a "30th Anniversary" edition was born. I don't care. I got it cheap. I  also probably would have bought a reissue copy. It's New Wave to the fucking max. My wife also informs me that squid is also a slang term in Hawaii for a nerd which makes the cover make even more sense.

The money shot is on the second side with "Tourist Riot". It's a snazzy little toe tapper about tourists burning the city when their vacations go south. It makes my day every time I listen to it.
Let it make yours too.
Posted by Swinging Singles Club at 3:01 AM 2 comments:

Email ThisBlogThis!Share to TwitterShare to FacebookShare to Pinterest
Labels: 1980, 1981, HI

There are some things that you come across that nobody seems to know shit about and nobody else seems to remember in the first place. Here are a couple 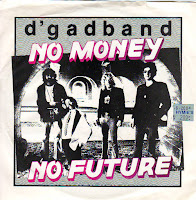 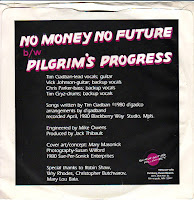 Never heard anybody say the name of this band ever. There is a seven inch previous to this one that I hope to find at some point. But Minnesota's a strange place. They have a fucking boatload of state pride that rivals Texas in ridiculousness, but they only really give a shit about that as it is reflected by the rest of the world. This translates into not really giving a monkey's ass about anything anybody does locally until the world outside notices it and then they'll loudly crow about it being Minnesotan until you want to punch them.
I mean, when the local news has some cause to refer to  Robert Zimmerman in any way it is always prefixed with "Minnesota Native". I'm pretty sure almost everybody knows who Bob Dylan is. Bob Dylan is sufficient in most circumstances to identify the guy. It's not like they're narrowing it down from the whole host of other Bob Dylans out there that may otherwise lead to confusion as to which one they're referring to. (Oh, it's the one from Minnesota...)

Nobody ever noticed this band. They remain in obscurity. 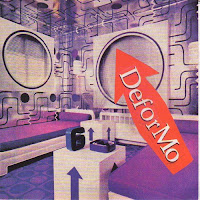 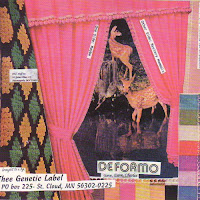 I actually saw this band. Maybe even more than once. I saw them. Liked them. Forgot their name. Forgot they existed. Later on I remembered they existed. Didn't remember their name. And so it went for quite a few years until I saw this and it all came together for me. You see kids, sometimes stories do have a happy ending just like "Ol' Yeller".

In 1998 the local rag even mentioned them as Best Local Band. (along with other recordings I still need to locate.) If they did move to NYC, they apparently didn't become super popular.


Posted by Swinging Singles Club at 8:55 AM No comments:

Winter: Sounds for the Season 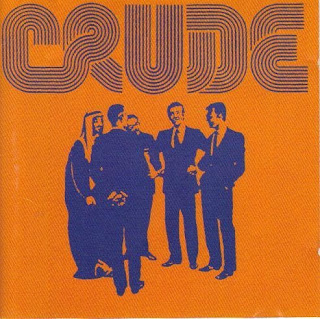 I live in Minnesota. It's cold here. Winters can suck. And by that, they can suck in ways that you'd have to be from Canada to truly understand. (We get most of our winter weather second hand from our neighbors up north) As the days continue to shorten and as somebody who primarily works nights I do not see much by way of daylight for quite a long ass fucking time. When I do experience daylight it's mostly as an annoyance separating me from my beauty rest or shining cheerlessly on snow and traffic on my way home from work.

It's times like these that call for sounds that match ones mood. That's where Crude's Inner City Guitar Perspectives comes in. It's a bit more easier on the ears than some of Matt Middleton's other Crude recordings, but then it's on Flying Nun and they have a business to run and overhead and shit like that. But it does fill that bleak void in the skull as you putter around in a world of eternal darkness.
Posted by Swinging Singles Club at 8:14 AM No comments:

These are the folks who split several releases with Boyracer which you may or may not remember from the endless stream of Boyracer posts way back when. 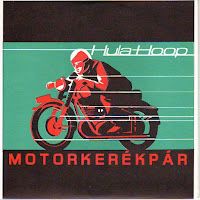 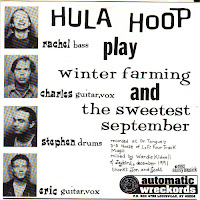 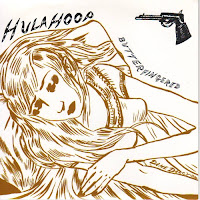 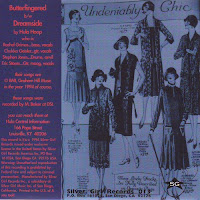 Best thing since sliced bread? Maybe not, but I quite like this band. Some time more than others, but I do find myself coming back to them every once in a while for a spin or two. They're kind of like a musical version of fish sticks. Not something you could have every day and probably not the best thing in the world, but every once in a while you get a notion and for a short while it's the most soul satisfying thing you can consume.

That said, "Butterfingered" is a great pop song.
Posted by Swinging Singles Club at 10:10 AM No comments:

Here's the last of the last batch of things I digitized literally months ago and have sat in a folder on mediafire just waiting for me to get my lazy ass shit together.

It's more Comped to Death shit. 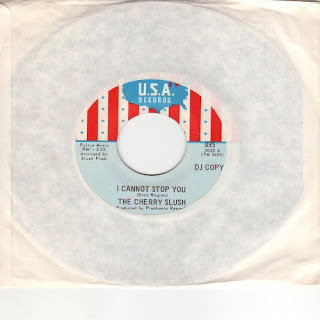 A snazzy little garage number from this Saginaw, Michigan band that even the presence of a horn section cannot quite diminish. It was a decent regional hit back when those could happen because one company didn't own all the radio stations in the country and decide what the country was going to consider a "hit". I don't listen to radios.

Yeah, it's been comped a million times. You may have already. But this is my copy and I fucking love this song. I'm a little less enthused by the b-side, but I fucking love "It's Cold Outside".

The band were from Cleveland, OH and would eventually reconjigger to become the Raspberries best known for a AM hit about trying to convince a girl to bang you. (Kind of like a slightly less graphic "Paradise by the Dashboard Light") Eric Carmen who sang for the Raspberries would go on to a successful solo career making dreary light rock songs for the rest of the 70's. I don't recommend them.
Posted by Swinging Singles Club at 9:52 AM No comments:

Kind of orphan singles that don't pair up neatly with other things that I've digitized recently. 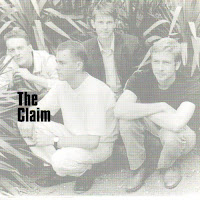 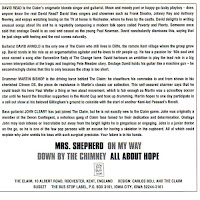 This was, based on Discogs, the swan song release for the Claim. It's on Bus Stop. They formed in 1980. They were English and played with the Dentists. Now we're up to speed. 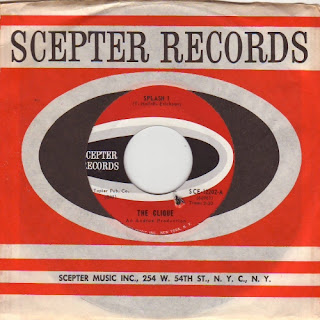 If the Clique are remembered for anything it's got to be that REM covered one of their songs for a minor hit long ago when wooly mammoths roamed the fruited plains and everyone smoked in elevators. Speaking of elevators. (note the clever transition) Here they do a cover themselves of fellow Texans 13th Floor Elevators track "Splash 1" which seems much less implausible in retrospect than it did to my naive self back when I got it. They don't fuck it up, but do manage to sand a few of the edges off it. If I were a noted rock critic who treated people's records like high school essays on literary symbolism in SE Hinton's "The Outsiders" I'd give it a solid B.
Posted by Swinging Singles Club at 9:33 AM No comments: