Eating Things. Listening to Other Things


I really should have a few more things here, but I'm not sure where it's at. 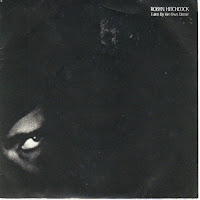 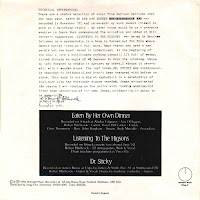 I was pretty obsessed with Robyn Hitchcock for a long while. I had everything I could find and somewhere along the way decided I didn't need it anymore. I'd kind of internalized it to the point I didn't need to physically listen to it again.

That was kind of stupid of me.

I'm also pretty sure that I have a few more items somewhere, but I don't know where. Perhaps misfiled.

But I did keep this. It's a personal favorite. 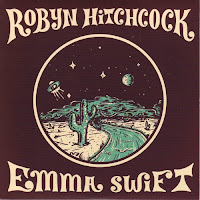 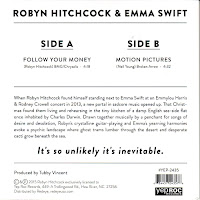 I think I've probably seen Robyn perform well over thirty times since 1986. He's always entertaining and worth seeing live. We've also chatted briefly on many occasions over the years since then. He, naturally has no memory of it since I'm generally just some random fan among many, but we've had some sort of weird conversational relationship going back some thirty odd years that he's completely unaware of. I think it's kind of funny.

This is a well spent single dollar for a Record Store Day release of a duet with Emma Swift who is Australian but lives in Nashville which is coincidentally where Robyn Hitchcock currently resides. Funny how that works. 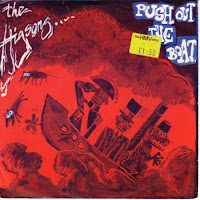 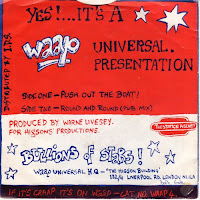 As an added bonus I'm throwing in a single by the Higsons so you too can join with Robyn and be "Listening to the Higsons" as on the above (which is the reason I bought it. I'm a curious sort and wondered what that involved).  Since this was released a year after the aforementioned song one can be fairly certain that neither of these songs were being listened to, but it should provide a taste of what one might expect.

You can listen to it now or if you're much more literal minded set it aside for your early November evening listening pleasure.

I don't care what you do in the privacy of your own home. That's your business. I've already heard it.

Posted by Swinging Singles Club at 10:46 PM No comments:

Email ThisBlogThis!Share to TwitterShare to FacebookShare to Pinterest
Labels: 1982, 1983, 2015, UK 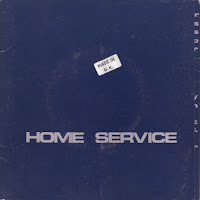 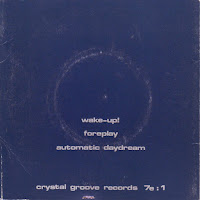 In keeping with the minimalism of the sleeves we'll keep this short.
Home Service. 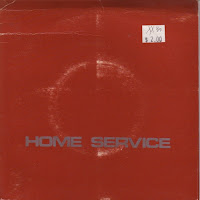 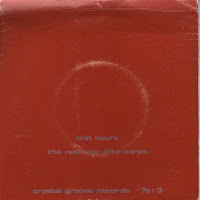 Second of three. I don't have the third.
Too bad. I like this.
This one especially.
Posted by Swinging Singles Club at 10:37 PM 1 comment:

I'm Going to Turn the Coffee Back On


I could use another cup to get through the next few hours. 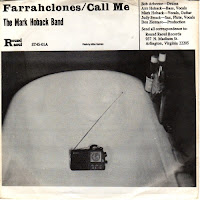 One gets the feeling that Mark Hoback and his band probably didn't get laid much.

First off he's a bit bitter about the number of vapid blondes with the feathered flip hairstyle who just don't have the kind of emotional depth that a complicated man like him requires. He's a real man who knows how to treat a full grown woman. But these easy ladies are just not for him.

Flip the record over and we're into the friendzone and our gentlesir just can't quite seem to take a hint.
He's "left her with his number a number of times" and he's "left her with a number of dimes"* and she still won't call him back and give him a chance to treat her like a real woman deserves to be treated.
It's so sad. Women are so shallow.

*For our younger viewers, before telephones became cameras you could put in your pocket and use to send text messages so you don't actually have to listen to other people talk, there used to exist in public places a thing known colloquially as a "Payphone" which accepted money in order for one to talk to somebody for a period of minutes before rudely cutting you off or extorting another quantity of small change to continue the conversation. In the 70's this price was 10 cents. 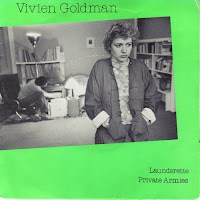 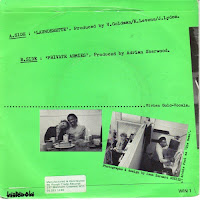 You  can decide if this is in your wheel house.

At least she's not some kind of Farrah clone.

Posted by Swinging Singles Club at 9:10 PM No comments:

I have business to take care of.

It will be short. 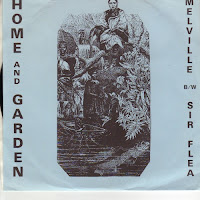 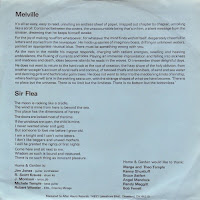 "By 1982, Pere Ubu, a band that had blazed a trail of influence (if not outright commercial success) through the punk/new wave scene, had broken up. Scott Krauss, Ubu's founding drummer, who had left a year before the band's dissolution, was already exploring new musical avenues when he was joined by Ubu bass player Tony Maimone. Together they entered the recording studio as Home and Garden"

That should be enough to start you off. The last update from their site is from 2012. So there you go. 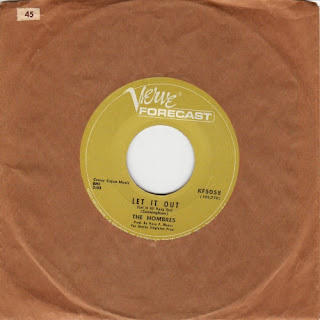 The Hombres. Garage. The A-side is a classic. B-Side is a lost classic. Let it all hang out, baby.


Have a night off.

Don't have a whole lot to say.
I worked an extra shift so I could spend stupid money on a batch of records that have been lingering on my wantlist a while and I got the itch to finally pull the trigger on. 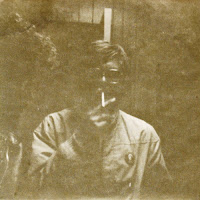 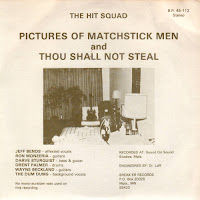 From our good friends at Break'er Records came this actually pretty credible cover of the Status Quo hit "Pictures of Matchstick Men" from before they grew their hair out really long and made a long series of more or less mediocre rock records through the 70's. (And I may be being kind of overly harsh, but I'm cranky this evening)

The B-side is a bit odder. It's a cover of "Thou Shall Not Steal" by the Wailing Souls turned from the original reggae version into something more akin to to Doo Wop.

You can decide for yourself if either side is an improvement. 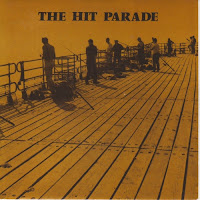 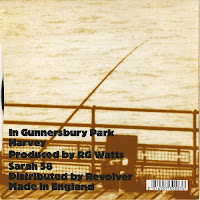 So this is the Hit Parade. It's on Sarah records. It's some earnest heartfelt acoustic songs.

You know the drill.

The band itself had apparently existed for quite a while. Their first single being released in 1984 chock full of chorus pedals and happy girls. I can imagine them sharing a bill or two with Haircut 100 to great effect.
Posted by Swinging Singles Club at 8:22 PM No comments:

It's the thirteenth. Time for another installment. 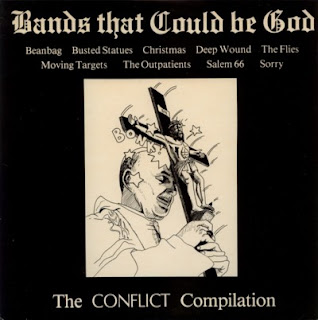 The word on the street is that when now Matador records honcho Gerard Cosloy was putting this record together back in his ill spent youth he made a typo. The intent was to title the record "Bands that Could be Good" but missed an 'O' and went with it. I can't exactly speak to the veracity of that since the memory is vague and old and dates from around the time of this release, but let's just go with it.

I can't find a decent tracklist to copy and paste and certainly don't feel the desire to do any more typing than absolutely necessary at the moment so here's a link to appropriate the Discogs page. It will give you an idea. State of the art of Boston circa 1983.

Posted by Swinging Singles Club at 6:43 PM No comments:


I don't know much about this stuff. I don't feel the need. These singles just are. 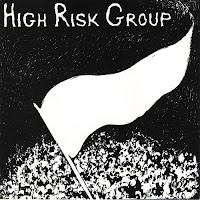 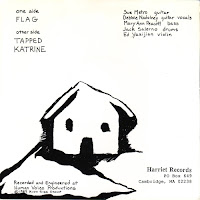 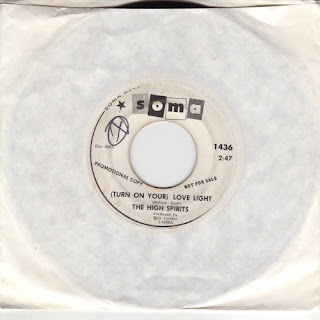 Also first of three singles by Minneapolis' long forgotten High Spirits.
Discogs says they played some reunion shows in 1984, 1998 and 1999.
That's about it really.
Enjoy?
Posted by Swinging Singles Club at 6:32 PM No comments:

Getting this Party Startled 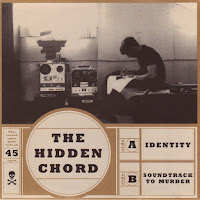 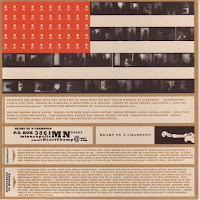 I've probably said it before, but the Twin Cities had a pretty good but largely ignored music scene around the turn of the century. Even I had a band. (We played for literal dozens of people). But alas, not even the people in and around here paid much attention. So much lost potential.

One of those bands was the Hidden Chord.

Here is one of their singles. Listen to it and decide for yourself. 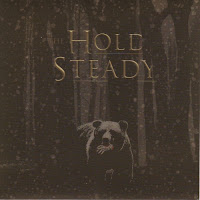 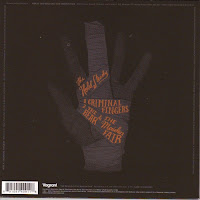 Yeah, Lifter Puller existed all through the 90's and nobody paid attention until half of that band moved to Brooklyn in 2000 and started doing a different version of the same thing. Then the hipsters had a big nerdgasm. Personally, the Hold Steady don't quite do it for me in the same way though. They're like the Springsteen Big Anthem version of Lifter Puller. But to each his own.

This was some kind of Record Store Day release by them bought a few years after the fact as sealed old stock. I think I got my two dollar's worth.
Posted by Swinging Singles Club at 6:21 PM No comments:


You may or may not be hungover.

I probably worked. I'm not. 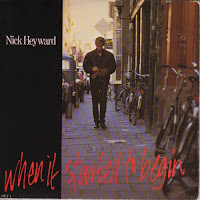 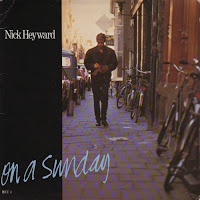 Yeah, so to gently ease your throbbing temples into the spit warm waters of the great chasm of 2018 I give you the mild sweet pop confection of Nick Heyward from my well loved personal copy of the lead off double seven inch of his solo career.

If you know Nick Heyward at all it's likely to be from his days as a young attractive cardigan model fronting Haircut 100 for their brief foray into the public consciousness before sinking quickly into obscurity to await the middle age of its teenage fans whence the nostalgic reunion tours could begin.

(I mean, that band really had some kind of weird sweater fetish. Look at the official video for "Love Plus One" and tell me different...)

Anyway, following the success of the first Lp, as frequently happens the lead singer goes solo and here we are. Two tracks from the Lp "North of a Miracle" (one song of which would end up in "Sixteen Candles" soundtrack)

So let yourself sink into the treacly goodness and float away into a fresh start before the shit starts anew.
Posted by Swinging Singles Club at 8:58 PM No comments: