Not Exactly What Masters & Johnson had in Mind


I'm posting a lot of Lps lately it seems. A lot of good ones just came up as I wander haphazardly down the alphabet. So it goes and does and is.

This is one that kind of stuck in my teenage brain for many many listens when I picked it up not long after its release. 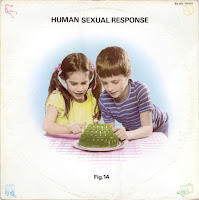 So what happens when you take a spunky little (for the lack of a better term) New Wave band and front it with a quintet of singers ala the Supremes. You get Human Sexual Response and this actually rather campy classic Lp. I played it a lot.

Between a song about wanting to be Jackie Onassis and the very important question embodied by "What Does Sex Mean to Me?" there was a lot to absorb and ponder as a teenager in those questioning years of adolescence.

Then there was their appearance on the Saturday afternoon (!) public access show "Boston Live" which may or may not have gotten them in trouble for this number called "Butt Fuck" or their version of the Capitols "Cool Jerk" in drag as nurses.

Those were surely different times. But I still have a special place in my heart for this one.
Posted by Swinging Singles Club at 12:45 AM No comments: 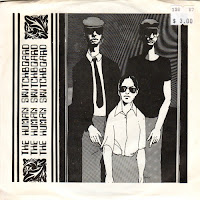 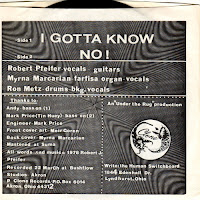 As previously noted a few posts back (10/10/18 to be precise) this is the original recording of "I Gotta Know" as done by the Human Switchboard. It's on Clone Records as well. It's also a farfisa driven garage rocker. That shouldn't come as a surprise. Listen to both and decide which recording you prefer. 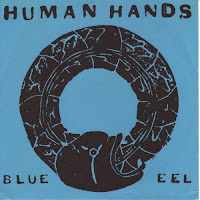 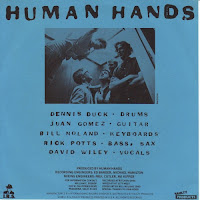 So at the same time that Bob Pfeiffer from the above band was revisiting the A side of that single with his new band, the Housekeepers, Human Hands got their shit together and put out this wonderful little single.
Everything you may want to know about this band is on their website. But it should also be noted that there's some strong connections to the LA Free Music Society and other assorted wonderful art damaged nonsense in their collective discographies.

To Suffer is to be Human

Freshly showered, beef stew warming up and 16 inches of surprise April Blizzard shoveled off the driveway. (If you haven't been following along. I'm typing this six months ago.)
It's kind of sucked ass today. 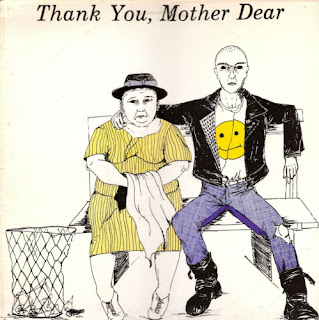 For starters that cover is pretty insufferable. But it's also pretty appropriate for this second and final release from Columbus, Ohio's own Human Sufferage. They made a punk rock noise with a healthy dose of the hardcores. They sound as primitive and amateurish as the cover which is not necessarily bad. Not exactly groundbreaking stuff, but nobody's going to throw you out of the party for liking it and the record is just obscure enough to be dropped in a record collector conversation to make you seem like you know more than you do.

I mean, I'm beyond that bullshit stage by now myself. But you know how people are.
Posted by Swinging Singles Club at 11:55 PM No comments:


I need to wrap this up and make some stew.
I'm hungry. 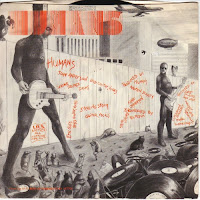 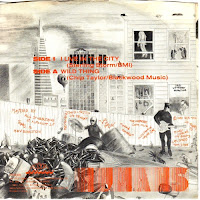 The Humans were from Santa Cruz, CA.

They put out a handful of things. Were signed to IRS and the faded back into the aether like so many bands did. "I Live in the City" is a pretty solid Nu Wave rocker though.

But for fuck's sake, nobody really needed another version of "Wild Thing", let alone this rather tepid one. 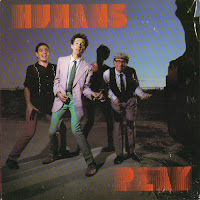 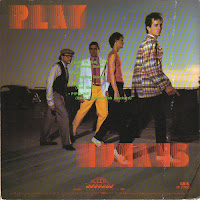 IRS seemed to have some faith that these guys could move some units because they went all out for a double single pack for this release. "I Live in the City" makes a return engagement along with another nice skinny tie number "Play".
I could have lived with just that, but there's more.

The other disc is two live tracks: a warmed over midtempo ode to "Tracy" and a passable pass at "Pipeline" that has all the sex appeal of the Eugene Levy cosplayer on the cover. I pass.

Less was probably more for this one.

Posted by Swinging Singles Club at 11:08 PM No comments:

Hotshots from the Hoosier State

This one is entitled Hoosier Hotshots.

It's a compilation of various Indiana bands of the 1960s.

It should not be confused with the vaudeville musical group of the 1930-40s that also went by the name of the Hoosier Hotshots. They are very different things. 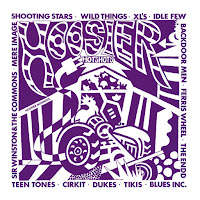 Email ThisBlogThis!Share to TwitterShare to FacebookShare to Pinterest
Labels: 1967, compilations, IN


So, as I type this it's approximately six months ago it's the middle of April.
I'm pretty far ahead of myself as far as this silly thing goes. But that's neither here nor there.
What is here.
Now.
Six months ago for you, but right fucking now for me.

I'm housebound and still in need of a haircut that is unlikely to happen for the foreseeable future.

At least eight volumes of semi-bootleg Duke Ellington radio broadcasts from 1945-6 arrived yesterday, so I have something to listen to. (Maybe I'll post some of those sometime. It's a different animal hearing that band live...) 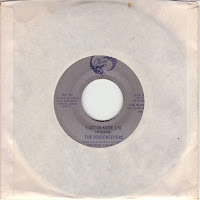 This is yet another Clone Records record. This appears to be a one off by the Housekeepers which seems to be another band  led by Bob Pfeifer and has another version of his song "I Gotta Know" which he'd originally recorded with Human Switchboard (and which will appear here shortly) 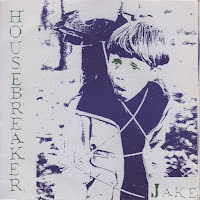 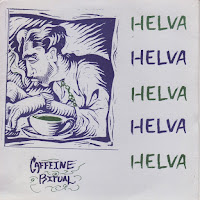 A mere 14 years later Housebreaker and Helva split seven inches between them for some guitar driven garage rock. Housebreaker was the brainchild of Brian Herb (as truly fine a human being as there ever was or will be) as part of his ill spent youth. When he is not trotting the globe tending to the guitars and metaphysical needs of famous touring bands he is known to front hastily put together versions of Outstanding Achievements in the Field of Excellence that are just about the only thing that I will leave the house for.


Helva were according to their Bandcamp page:

Helva was a ska/punk/metal/swing/reggae band from Minneapolis from 1994-2001. The band started in Western WI and ended up touring all over.

I assume they were also fine people too. One would expect nothing less.
Posted by Swinging Singles Club at 10:09 PM No comments:

Yet More Fodder for Tapes for Girls


Today's installment in which we continue with the light pop stylings of the entity that was once known as Honeybunch. 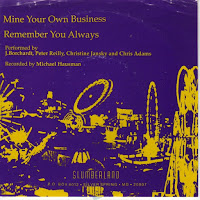 Yeah, I know. That's the same song as the B side of "Walking into Walls" again. They used it twice. 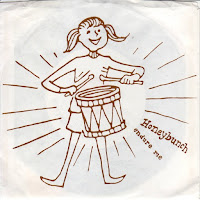 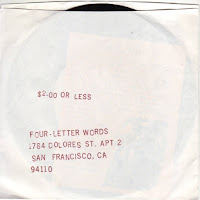 They didn't even have a B side for this one. Just one song on one side on the fourth label they released records on. 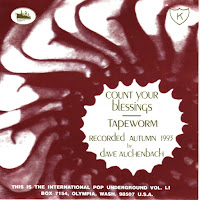 It would be another couple years before they'd release this final single (before briefly reforming in the 20th century for an ep on Bus Stop that I don't have.)

There was also a Cd compilation released in 1995 with all of these and a few more tracks that I could go digging for it to post.
But I don't feel like it right now. These will have to suffice. I have stuff to do.

Back to Rhode Island


Here we are again. I need to go to the store and drop off a check at the practice space for this month's rent. I am currently not doing that. I'm doing this.
It's not a problem yet, but it will be.

In the meantime, here's Honeybunch 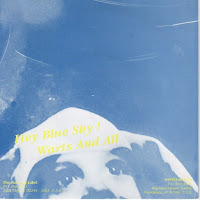 Honeybunch was the band that Jeffrey Borchardt had before and during his tenure in Velvet Crush. It's a lot more twee than the powered pop of Velvet Crush. This first one was on the Bus Stop Label. 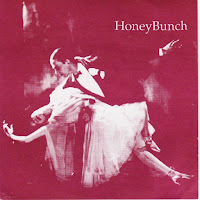 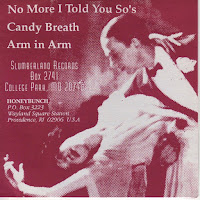 
More of the same. This time on Slumberland. I was introduced to them via the "Why Popstars Can't Dance" compilation that I posted here years ago. 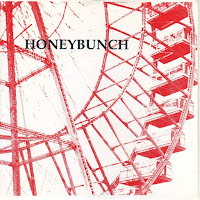 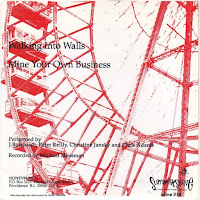 Yeah, this is the song that first caught my ear. Perfect fodder for Tapes for Girls that was how music nerds attempted to woo women back in the dark ages before Tinder. It worked sometimes. You had to make lots. It was a numbers game. This one was on Summershine.
Posted by Swinging Singles Club at 7:19 PM No comments: