I did four other singles/flexis tonight including some attempted cleanup with audio restoration software. I feel like I've accomplished enough for the time being.

I have a hard time doing that and this at the same time anyway because I can't listen to the thing I'm typing about. Not that it matters a whole heck of a lot, but it's the principle. 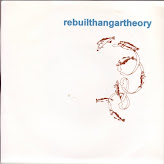 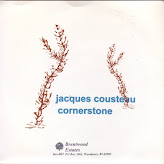 There's really almost nothing that I could find that goes into any particular detail about this Providence, RI band that called itself Rebuilthangartheory.

They were from Providence.  It's indie rock of its time and is enjoyable for it being itself. 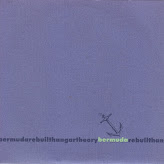 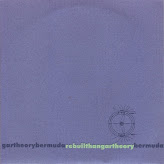 I got nothing. But I did find a contemporary review from some kind of long dead Zine called Light Rotation that still sails the internet seas like some kind of ghost ship.

"Rebuilthangartheory / Bermuda split single (7") (Scribblehut)
This glorious split single gives us a taste of Rhode Island (two Providence bands, two songs each) and it tastes even better than a tall, cool glass of coffee milk (autocrat rules!). Um... on with the review. rebuilthangartheory play in an up-tempo strummy style that reminds me very much of Versus, especially on "agharta". The primary singer here is Frederick Prior, whose frenetic singing is kept under control by the cool vocal stylings of Margie Wienk (who's also in Difference Engine). There is a refreshingly magnetic quality about the fast-paced groove they set forth, making this an ideal soundtrack for a breezy drive over that bridge that takes you into Newport.
bermuda, with their steady dynamics and intensely crisp drumming (by Cara Hyde, also of Difference Engine!), calmly hit all of your pressure points in a systematic fashion. It isn't until after you listen to the songs that you realize they beat you all up. References made to Red Stars Theory definitely aren't off the mark, but bermuda take you even farther out to sea (so far out, in fact, that there may be glimpses of particular Chicago-based bands with oceanic references). Oh, and all of this comes in a smart blue-grey wrap around sleeve."

So there you have a couple of Difference Engine connections for all you fans.

Posted by Swinging Singles Club at 2:24 AM